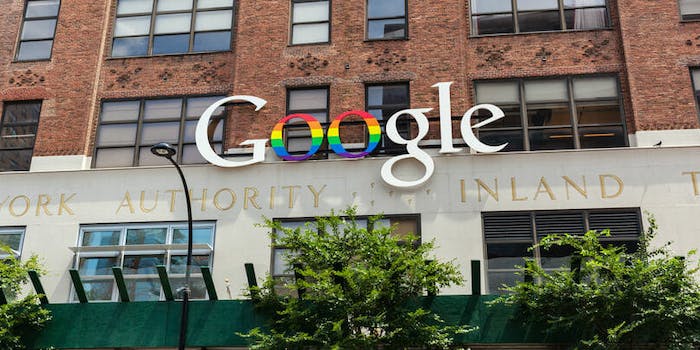 Sorry alt-right dudes, but #BoycottGoogle is more complicated than you think

Trust us, you won't want to do it.

Members of the alt-right are uniting against Google after it fired an engineer for writing what many media outlets are calling an “anti-diversity” manifesto. The document sparked outrage in Silicon Valley for claiming that biological differences—not discrimination—are the reason so few women have tech jobs.

This sentiment appears to have struck a cord with members of the alt-right, who feel Damore’s dismissal was unjust and politically driven. They are now flocking to Twitter to call for a ban against Google.

Google's firing of James Damore proves his point completely. I will no longer be using Google for any services.#BoycottGoogle

Try to ban google en use opera or firefox https://t.co/zuNb7OZcKY

But outraged critics hoping to ban the tech giant face a difficult truth: Banning Google is like banning the internet—a nearly impossible task, as some have already acknowledged.

Almost everyone in the United States uses one of Google’s products on a daily basis, but it isn’t until you consolidate its services that you recognize the company’s remarkable digital footprint.

Let’s begin with the heavy-hitters: Google Chrome and Google Search. Chrome is the most used web browsing service in the world, with just short of 60 percent of the desktop market share. It also tops numerous “best web browsers” charts for its stability and presentation. Even then, Chrome isn’t the most difficult Google service to replace. There are a number of good alternatives out there—in fact, many won’t push your computer as hard as Chrome—but you’d be hard-pressed to find a faster and simpler platform for navigating the web.

Google Search (Google.com), on the other hand, is in a league of its own, garnishing more than 90 percent of all web search traffic. The truth (for most people) is that alternatives like Bing and Yahoo won’t provide results as relevant as those presented by the de facto industry leader.

If you really wanted to ban Google, you could sacrifice convenience and use alternative search and web browsing services. But you’d only have dipped your toes in the deep pool that fills Google’s online presence.

To truly ban Google, you’ll also need to stop using Google Maps, the clear front-runner when it comes to navigation apps. And no, Waze won’t do—that’s also owned by Google. Oh, and you’ll need to step out of the International Space Station to get away from Google Earth, a rather niche program, but one that is nonetheless difficult to replace.

At this point, you’ll have to transfer to arguably inferior web browsing and search services, and a good alternative to Google Maps that isn’t Waze. All that and you’ll still have to handle two more powerhouse Google services: YouTube and Gmail.

There is simply no replacement for YouTube (and its female CEO). Sure, there are alternatives, but nothing comes close to the largest video platform, and a breeding ground for internet culture. According to Statista, YouTube owns 78.8 percent of the market share for “multimedia sites,” followed by Netflix and Hulu—two video streaming sites that don’t step into YouTube territory. Its closest competitor, Bing Videos (yes, Bing Videos), owns less than 1 percent of the market share and doesn’t come near YouTube’s more than 1 billion monthly active users (or a third of the internet). Similarly, Gmail dominates the email client market share, falling only to the iPhone client, which you’ll presumably use once you’ve tossed out your Android devices.

Other useful Google services you’d be sacrificing include Google Flights, Drive, News, and Shopping, along with Hangouts instant messaging and the excellent Google Translate.

But banning Google could also mean a living room makeover. If you own a Sony, Sharp, or Philips smart TV, it may come with Google’s Android TV OS. If you don’t, there is still a good chance your TV has Google’s Chromecast built-in. The company has also released its own hardware over the last few years, including Chromecast devices, the Google Home smart speaker, and Google WiFi/OnHub routers. Finally, you’ll need a new way to adjust the temperature of your home. Alphabet, Google’s parent company, owns Nest, best known for its popular smart thermostats.

Simply put, Google products touch every corner of the internet, even before accounting for its ad presence and partnerships. That’s not to say banning Google is impossible—you’ll just need to accept that doing so means getting rid of pieces of the internet that make the internet so appealing.