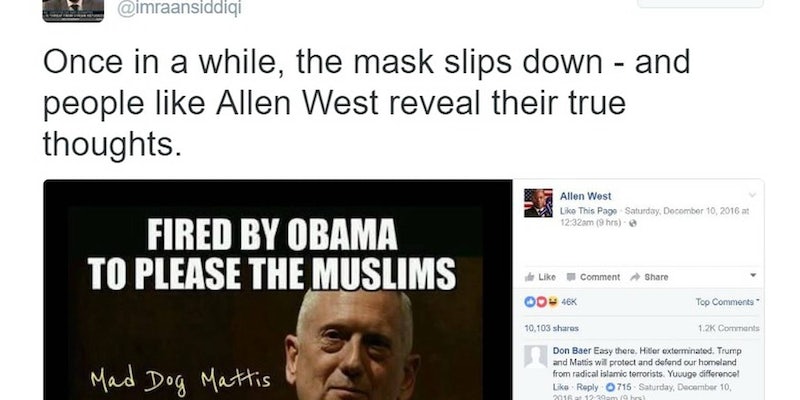 The post was deleted. But not before nearly 40,000 people liked it.

After a full year of campaigning that pushed anti-Muslim paranoia and xenophobia to the forefront of American politics, President-elect Donald Trump is finally making his Cabinet picks, choosing the people who’ll be running the different wings of government for the next four years. And his choice for secretary of defense—retired Gen. James “Mad Dog” Mattis—has inadvertently pulled back the curtain on what can only be called an instance of genocidal bigotry.

The central figure in all of this is Allen West, a former Lt. Col. in the U.S. Army and a one-term congressman who represented Florida’s 22nd district from 2011-13. West, who was charged with beating an Iraqi police officer suspected of plotting against his unit while in the military in 2003, has long been a controversial, strident, and at times overtly prejudicial voice on the militaristic far-right.

But even by the standards he’d previously set, what was posted to West’s Facebook page on Saturday rises to the level of genocidal anti-Muslim sentiment, as plain and clear as can be. Namely, a meme of Mattis, with block-lettering proclaiming “fired by Obama to please the Muslims, hired by Trump to exterminate them.”

Once in a while, the mask slips down – and people like Allen West reveal their true thoughts. pic.twitter.com/zaREZ34VdF

It’s worth noting that this does not relate to any intentions Mattis himself has expressed toward Islam—he bears no blame in this. Needless to say, West’s meme was not received well by the denizens of social media.

This is straight Hitler shit. https://t.co/byZMed8NPc

Remember Allen West owes his notoriety (which got him into Congress) to GOPers defending him after Army charged him with torturing an Iraqi. https://t.co/vp9enKgErC

This is the type of person they're talking to. https://t.co/GMt1UBaouo

As should go without saying, General Mattis himself holds none of the insane views attributed to him on West’s FB page. https://t.co/Myqv11Yklu

After the meme was deleted, a statement from Michele Hickford—the editor-in-chief of West’s website—was posted to Facebook. Hickford took responsibility for the meme, saying that West himself didn’t post it and that it was taken from another source and put on his Facebook page without his knowledge or approval.

Hickford also acknowledged that the meme—which, again, celebrated the coming extermination of Muslims at the hands of the American government—was “despicable.” She did not, however, admit to posting it herself, nor did she name the person who did.

It's amazing to see how many folks fantasize about genocide. pic.twitter.com/Bnhddo6fzE

For what it’s worth, though, a whole lot of West’s fans on Facebook didn’t see anything wrong with it. A screenshot of the post prior to its deletion showed at least 39,000 people liked it.