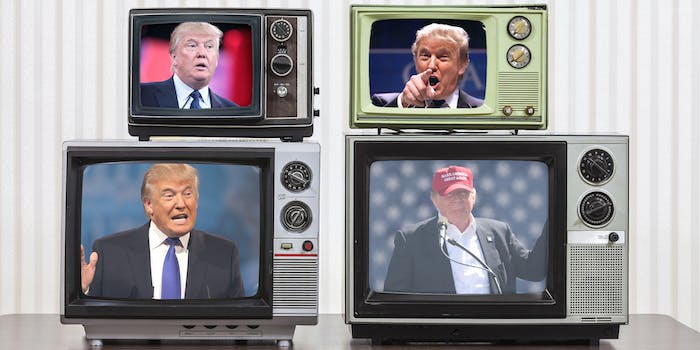 Here are 10 ‘fake news’ stories Trump has pushed as real

Welcome to our 'post-fact' reality.

President-elect Donald Trump is not a fan of “fake news.” But you’d be excused for thinking he is.

The soon-to-be president in his first press conference of 2017 on Wednesday admonished the media for reporting on a widely disputed and still unconfirmed memo that alleges Russia held compromising information on Trump.

“It’s all fake news. It’s phony stuff. It didn’t happen. And it was gotten by opponents of ours, as you know, because you reported it and so did many of the other people,” Trump said. “It was a group of opponents that got together—sick people—and they put that crap together.”

Ironically enough, many credit Donald Trump for ushering us into this “post-fact” era. From birtherism to claims that millions of illegal immigrants voted in the 2016 election, Trump has dished out his fair share of “fake news” throughout his career—before his presidential run, on the campaign trail, and in the days leading up to his presidency.

As of this writing, Politifact estimates that Trump has made a total of 241 statements that are “mostly false,” “false,” or “pants on fire.” A total of 51 of Trump’s claims investigated by Politifact ranked “half true.”

So, since Trump now appears to be a warrior against inaccurate information, here is a rundown of a few of the more recent or memorable “fake news” that Trump has claimed is real:

In 2012, Trump tweeted a fake news article from World Net Daily that claimed Obama was born in Kenya. But that was just one small piece of Trump’s quest to prove Obama was not a true American and thus an illegitimate president.

Let’s take a closer look at that birth certificate. @BarackObama was described in 2003 as being “born in Kenya.” https://t.co/vfqJesJL

Trump finally admitted in September 2016 that President Barack Obama was born in the United States. Prior to that, however, Trump was birther-in-chief. His obsession with Obama’s birthplace lead to calls for the president to release his birth certificate, and Trump claimed to have dispatched private investigators to Hawaii to dig into the matter.

“Hillary Clinton and her campaign of 2008 started the birther controversy,” said Trump in September 2016.

In the very same press conference in which Trump admitted that Obama is a legitimate American citizen, he started a new conspiracy theory about his Democratic opponent starting the very bogus notion that Trump himself peddled so vigorously for years.

Truth is, Andy Martin, an Illinois politician, is credited with starting the birther conspiracy theory in 2004. And while some Clinton supporters circulated the theory, neither Clinton nor her campaign ever pushed it.

“The only one that cares about my tax returns are the reporters. They’re the only ones,” Trump said at a January press conference.

The Pew Research and CBS News polls, both released within the past month, found that a majority of Americans do think Trump should release his tax returns as his predecessors have done for the past 40 years.

Debunked by the Guardian.

The unverified Russian dossier circulated among members of the media, as well as diplomatic and intelligence officials, before the election. Political opposition research, the documents were reportedly requested by an opponent of Trump in the Republican presidential primary. The former MI-6 agent in charge of writing the report, Christopher Steele, leaked the memo to Mother Jones, which first published a story on the documents in October. The dossier had been circulated to a Western diplomat, who released it to Sen. John McCain (R-Ariz.). It’s unclear how it was leaked to other outlets that recently reported on it, including CNN, BuzzFeed, and other news sources.

Debunked by the New Yorker.

Healthy young child goes to doctor, gets pumped with massive shot of many vaccines, doesn’t feel good and changes – AUTISM. Many such cases!

The anti-vaxxer movement gained traction after a 1998 study in The Lancet linking the measles-mumps-rubella vaccine to autism. The study was later discredited and retracted. The Centers for Disease Control offers nine separate studies disproving the anti-vaccine conspiracy theories. Just this month, however, Trump reportedly asked anti-vaxxer Robert F. Kennedy Jr. to lead a commission on vaccine safety (although it remains unclear whether that will come to fruition due to what Kenney called “massive blowback.”)

This claim has been made by Fox News host Sean Hannity as well as in a parody story with the headline, “U.S. to House 250,000 Syrian Refugees at Navajo, Standing Rock Indian Reservations,” which appeared on a fake news site, RealNewsRightNow.com.

The Obama administration actually planned to admit between 70,000 and 100,000 refugees total—from all countries—and only around 10,000 refugees from Syria in fiscal year 2016. That number could potentially increase to 25,000 Syrian refugees in 2017.

Trump and his supporters have regularly accused anti-Trump protesters of being paid for by his opponents. Here’s one example:

Just had a very open and successful presidential election. Now professional protesters, incited by the media, are protesting. Very unfair!

The Trump tweet above came after he was elected, but this narrative has popped up a couple of times. This fake news story appears to have originated with a Trump supporter in Austin, Texas, who shared photos of what he thought were buses of protesters, whom he assumed had been paid to protest the president-elect. The supporter’s photos and claims were shared hundreds of thousands of times on social media.

In fact, the buses were rented by Tableau Software, which had a large company conference in the area.

8) Millions of illegal immigrants voted in the 2016 election

After this claim, Trump’s team pointed to this study as evidence. The study and Trump’s claims on this matter have been thoroughly proven as false.

Cruz did not renounce his Canadian citizenship as a US Senator- only when he started to run for #POTUS. He could be Canadian Prime Minister.

Cruz, a 2016 Republican presidential candidate, shed his dual-citizenship in 2014—a year before his announced run for the U.S. presidency.

.@CNN is in a total meltdown with their FAKE NEWS because their ratings are tanking since election and their credibility will soon be gone!

This is the morning-after follow-up insult Trump had for CNN regarding its coverage of the unverified Russian-dirt dossier.

The 35-page dossier was summarized to Trump and President Barack Obama in a classified report released earlier this month, according to CNN, which did not report out the details of the sordid allegations. BuzzFeed published a full copy of the dossier, which was reportedly compiled by a former British intelligence operative.

CNN has consistently stood by its reporting on the intelligence briefing, which has since been confirmed by Vice President Joe Biden. And its ratings have consistently risen over the past year.