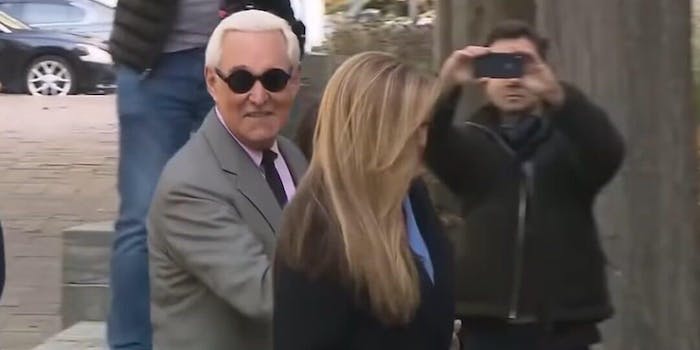 Conservative fringe media are peddling lies about the case.

On his show yesterday, conspiracy theorist Alex Jones tried to disclose the identity of a potential juror in Roger Stone’s trial.

Jones is part of the far-right media effort to influence public opinion and, potentially, the outcome of the case.

President Donald Trump’s eccentric, longtime adviser is charged with lying to Congress, obstructing the Russia investigation, and attempting to intimidate a witness.

Jury selection in Stone’s trial began yesterday in appropriately bizarre fashion. Stone left court early with food poisoning, a man in the audience collapsed and went to the hospital, and attendees included disgraced far-right figure Milo Yiannopoulos, who can’t even get into a furry convention anymore.

So a recess was called at Roger Stone’s trial after a man screamed and started seizing in the courtroom. Separately, Roger Stone apparently hid in the bathroom for over 30 min, and his wife was overheard asking if he was okay.

This is at the entrance to the DC District court where the Roger Stone trial is taking place. pic.twitter.com/ROjyftOQA3

Stone’s attorneys argued during jury selection that anyone who doesn’t support Trump, voted for Hillary Clinton, or is/was a federal employee is biased against their client and thus should be stricken from the potential pool, Politico reports.

Jones and far-right media outlets like the Gateway Pundit, on the other hand, were all over it.

The latter published an article entitled, “Corrupt Obama Judge Amy Berman Jackson Allows Trump-Hating Obama-Era Officials Who Voted For Hillary Clinton to Remain Potential Jurors in Roger Stone Case.” The false assertion that Jackson is corrupt appears to be based entirely on her being appointed by President Barack Obama. Further, in reality, one potential juror disclosed having voted for Clinton; another said they had a negative view of Trump.

The Pundit also incorrectly claimed that Stone is being tried for the “crime” of helping Trump win the election. He’s charged with witness tampering, obstruction, and making false statements about his communications with WikiLeaks, all of which allegedly occurred long after Trump’s inauguration. Stone has pled not guilty.

While it is true that four potential jurors are or were federal employees, given the trial’s Washington, D.C. location, that is not particularly surprising. And, as Jackson pointed out, current federal employees now work for Trump.

Last night, Jones went further than merely lying about the case, although he did that too.

With help from Stone collaborator and Proud Boy member Jacob Engels, who was at the trial, Jones tried to identify the potential juror who worked as the communications director at the Office of Budget and Management (OMB) during the Obama administration.

Media Matters reports that Jones asked Engels to give a sign as he went through a list of former Obama officials. Engels apparently signaled when Jones read the name of former White House communications director Jennifer Palmieri.

There’s just one problem with this theory: the OMB is not the same thing as the White House.

Accuracy has never really been Jones’ thing. Some may have thought that the defamation suit filed by parents of Sandy Hook victims, or even the shooting by someone who bought the Pizzagate conspiracy he peddled and later apologized for, would’ve slowed his roll. Apparently not. On the show, Jones and Engels both reportedly incorrectly said that the person, who he falsely called an “Obama communications asset” (whatever that means), had been selected for the jury.

Jones also lied by implying that Stone might get the death penalty.

“We’ve got to have Obama’s former communications director hang Roger,” he said. “Hell, if they give him the death penalty, maybe she can hang him and kick the lever and he’ll break his neck and she can piss all over his dead body.”

Stone is not charged with a capital offense.