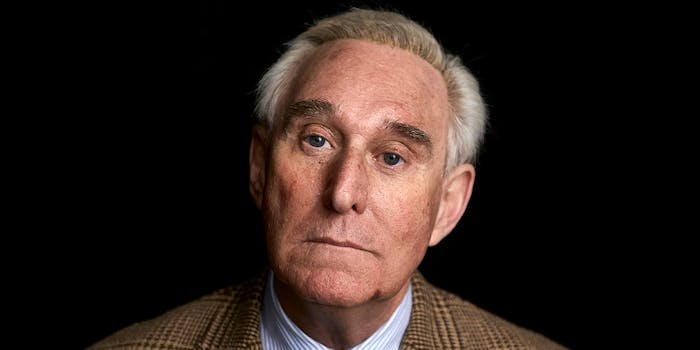 The far-right finds a martyr.

Law-and-order Republicans were upset. Not only do they believe the FBI—previously a paragon of justice—is now overrun with corrupt actors attempting to overthrow the president, but they also took issue with just how many FBI agents showed up at Stone’s house.

It’s not clear why the FBI felt the need to bring so many agents, but it is possible that quotes from Stone about preparing for civil war if the deep state advances on Trump may have played into it.

Now, though, the far-right is turning Stone into a martyr by saying the government went after him with greater force than what the CIA and U.S. military used to take down Osama bin Laden.

Stone himself made the claim on Monday: “To storm my house with greater force than was used to take down Bin Laden or El Chapo or Pablo Escobar, to terrorize my wife and dogs, it’s unconscionable,” he tweeted.

Roger Stone, a well-known exaggerator and accused liar, said he was treated worse than Osama bin Laden. He said today, "To storm my house with greater force than was used to take down Bin Laden or El Chapo or Pablo Escobar, to terrorize my wife and my dogs, it’s unconscionable."

But that hyperbole wasn’t originally started by Stone. He picked it up from one of his closest allies online, conservative blog the Gateway Pundit, which ran the numbers, and claimed that the FBI’s arrest of Stone was a greater effort than capturing the world’s most wanted terrorist.

On September 11, 2001, Islamist terrorists murdered 2,996 Americans and foreigners in four coordinated attacks on the World Trade Center, the Pentagon and a separate plane that crashed into a Pennsylvania field.

On May 2, 2011, in the early morning hours 25 Navy SEALs stormed Osama Bin Laden’s compound in Abbottabad, Pakistan. The Navy SEALs arrived in two Black Hawk helicopters to storm the compound of the terrorist leader behind the 9-11 attacks.

The article was accompanied by some extremely unsubtle art, which showed the Twin Towers in the immediate aftermath of the 9/11 attacks. According to the New York Times, there were 79 operatives present during the Osama bin Laden raid—though CNN does report 25 Navy Seals.

And, of course, it’s become a factually inaccurate meme.

12 Navy seals were sent to get Osama Bin Laden. 29 agents, 2 helicopters, 2 boats and armored vehicles were sent to pick up Roger Stone at home in Florida. Does it sound like the Mueller team has any respect for your hard earned taxpayer dollars?

The number on the meme fluctuates between 12 and 25 for the Navy Seals and 27 and 29 for the FBI agents knocking on Stone’s door, but the message of the meme remains the same. Roger Stone was more of a threat to the U.S. than Osama bin Laden.

Even the FBI agents claim though, is suspect. Where does that number come from? It was Stone, who claimed in court there were 29 agents there.

“At the crack of dawn, 29 FBI agents arrived at my home with 17 vehicles, with lights flashing, when they could have contacted my lawyer,” Stone explained after a court appearance Friday. “But the FBI agents were extraordinarily courteous.”

That number has not been corroborated, so even the meme is based on spurious facts and it’s possible there were fewer agents there.