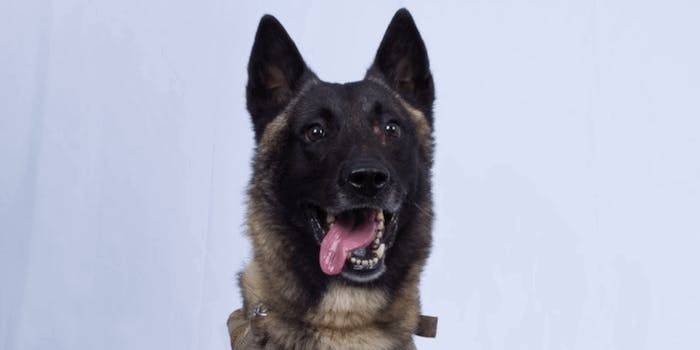 Conan the dog is a very good boy?

President Donald Trump and the White House can’t seem to agree on whether the dog involved in al-Baghdadi raid is a very good girl or a very good boy.

Conan the dog took part in the mission that resulted in ISIS leader Abu Bakr al-Baghdadi’s death in October. The confusion began on Monday when Trump awarded Conan. Trump, along with Vice President Mike Pence, referred to Conan with male pronouns.

On Tuesday, the Department of Defense (DoD) got involved to seemingly set the record straight: Conan is a female.

Just in: #Conan, the hero dog from the al-Baghdadi raid, is in fact a GIRL, a US defense official tells ABC News. Yesterday, a WH official told the pool that Conan was a girl but later said the dog was actually a boy — after POTUS & VPOTUS used male pronouns to refer to Conan.

Conan, the hero dog, dilemma:
Monday:
Trump says male
WH then says Conan is a female
WH then corrects to say Conan is a male
Today:
DoD says female
Then, WH stands by story that Conan is male.
Then, DoD says male, after *triple checking*

Then, another DoD official said that “for sure Conan the hero dog is a male based on multiple internal checks,” according to ABC reporter Luis Martinez.

UPDATE to the Conan gender: Another US defense official now says that for sure Conan the hero dog is a male based on multiple internal checks.

The dog’s gender has not changed from male since mid-Tuesday.

People used the photo Trump tweeted of Conan in October to speculate about the dog’s gender, with most accusing Trump, along with White House and DoD officials, of lying about Conan’s “confirmed” gender.

“Gender reveal: girl dog #ConanTheDog #Conan #dogs Just because Trump called it a boy, you can’t rewrite biology,” Twitter user @LauraK9doc wrote, along with the photo of Conan marked with a circle around the dog’s crotch.