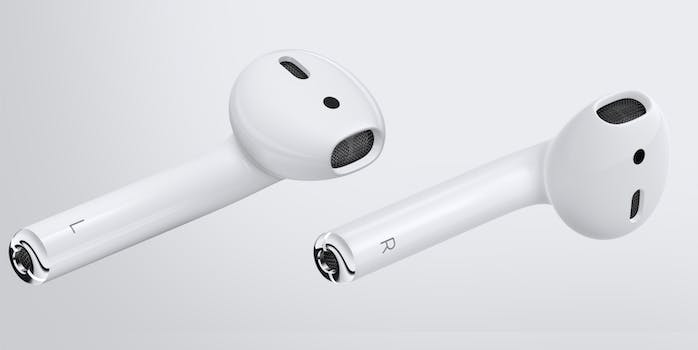 The best Airpod alternatives at every price point

Everyone loves Airpods, but not everyone loves the price. Here are a handful of great alternatives to throw in your ears.

Apple’s Airpods are aesthetically pleasing, quick connecting, and frankly, incredibly expensive. But just because Airpods are arguably the most popular wireless Bluetooth earbuds doesn’t mean they’re the only good option on the market. There’s a world of options out there that give Apple’s proprietary gem a run for their money. Before you commit, check out the best Airpod alternatives.

1More may not be a household name, but that doesn’t mean you shouldn’t consider these little wonders. They offer everything Airpods do, and even a little bit more. The case provides up to 24 hours of recharging power, and storing your buds inside for just 15 minutes gets you three hours of playback. But the biggest selling point is the battery. While Airpods can get up to five hours of playback per charge, the 1More earbuds get up to six and a half hours. The sound quality is just as good, too. The only real downside is they lack effective noise cancelation, but they’re still an incredible Airpod alternative at $50 less.

Anker Soundcore have the look of Airpods for a fraction of the price, but the similarities aren’t just in design. The Liberty Airs have wonderful microphone clarity for phone calls and the same five hours per charge playback time as Airpods. One thing they bring to the table that Airpods don’t are touch controls. With simple taps on the side of your devices, your Liberty Air buds can pause a song, skip tracks, take a call, or activate your voice assistant. When you’re on-the-go, the charging case provides up to 15 hours of extra power. If only the case came with a quick-charge feature.

You know you’re going to pay a premium price with Beats brand products, and the Powerbeats Pro earbuds are no exception. However, with that extra money comes some of the best battery life and bass on the market. These little beauties have up to nine hours of listening time, with an extra 24 hours provided by the charging case. Unlike many other models, these are also great for exercise thanks to their sweat and water-resistant design and an ear hook, so you won’t lose one while jogging. Plus, they use Apple’s Lightning port to charge, so you don’t need to bring anything but your iPhone charger on the road with you. And, unlike the Airpods, you can control the volume, answer calls, or switch tracks by touching the sides.

The Pamu Slide earbuds are the only models on this list that haven’t been released yet. So why are we talking about them? Because it looks like these are set to be the real deal Airpod-killer consumers have been waiting for. The Pamu Slide developers have raised over $5,277,000 on Indie Go Go, with over 69,6200 backers, but unlike many crowdfunded devices, these are actually getting released. Early buyers have already started to get their pairs and some journalists have reviewed them. CNBC gave the Slide a glowing review, complimenting how easy they are to use, their battery life, their water resistance, and the case design. The Slide offers up to 10 hours of battery life, double that of the Airpod. There are two case models, one with wireless charging and one without. If you get the wireless charging model you can also use the case as a wireless phone charging pad. When the crowdfunding campaign is over the price will increase, but it would be surprising if the earbuds cost more than $200 when they finally hit shelves. Still, why wait and find out? This writer has already pre-ordered a pair.

This budget-priced pair is ideal for people who hike or are regularly away from a power outlet. While Dooreemee True’s five-hour battery life is standard, its charging case has enough power to recharge them around 20 times. In keeping with the product’s traveler-friendly battery, they’re also sweatproof and super comfortable for long term wear. They also don’t have a main pairing channel, so it doesn’t matter where you place them in your case. The one you put in the right slot will be paired for right, and left for left.

JLab Audio’s JBuds Air are a perfect Airpod alternative for business travelers who have to pack light. With dual microphones for crystal clear calls and six-hour battery life, these earbuds can serve as your headphones and Bluetooth headset at once. The charging case includes an incredible 24 extra hours of charge and you don’t have to pack a cord for it. That’s due to the JBuds Air case having a built-in USB cord. Frankly, we feel like it’s a feature more rechargeable wireless earbuds should steal. Be aware, however, these have no waterproofing, so they’re not for gym rats.

To be honest, the Samsung Galaxy Buds are a little light on features. While they have a six-hour battery, the charging case only adds an extra seven hours of charge. These Airpod alternatives are not sweatproof, but they’re sweat-resistant. So why did they make the list? Sound quality and a wireless phone charger. The Samsung Galaxy Buds case includes a wireless phone charger, making it a handy piece of gear for office workers on the go. They also sound great, with powerful but not overwhelming bass and controls for quickly turning off noise cancelation without stopping the music. Still, at $129.99, you’ll want to think about how important those features are before you cough up the cash.

There are a remarkable number of budget options on this list already, but the TOZO T10s have charms worth considering. First off, the T10s charging case can be charged wirelessly, making it easy to just throw down at the end of the night without hunting for cords. They have incredible sound quality, with consistent highs and lows and solid bass. While they’re cheap, that doesn’t mean they aren’t durable. Numerous user reviewers have bragged about wearing them in the shower, dropping them in puddles, and other mishaps without experiencing any issues. The only real downside is the battery life: The T10 have three-and-a-half hours of playtime and only nine extra hours of charge from the case.

Finally, we have the ultimate in budget Bluetooth magic. Let’s start by acknowledging these aren’t “earbuds.” What they are is the next best thing. With eight hours of charge, a waterproof design, and ear hooks, these Bluetooth miracles are ideal for day to day use. If one falls out of your ear, there’s a cord attached. Should you lose the pair, it doesn’t matter, because these cost $17.99-29.99. Buy an extra set and give them to a stranger at the park at that price. Senso’s headphones have an incredibly strong connection, so you can listen to your music loudly and enjoy clear phone calls. No, you will not have the subtle and fashionable experience of the beautiful and compact earbuds listed above. What you will have is a great set Airpod alternatives and an extra $40 to $200.