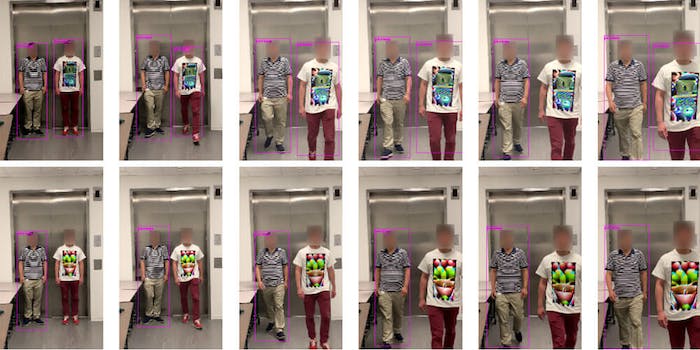 Image recognition systems won't even know you're there.

Researchers developed a T-shirt design that can hide individuals from image recognition systems by fooling the algorithms into believing that no one is actually there.

The discovery, made by researchers from Northeastern University, IBM, and MIT, could allow anyone to go undetected when faced with certain AI-powered surveillance cameras.

The team says its project, dubbed the “Adversarial T-shirt,” continues to work even when the shirt becomes wrinkled and deformed due to the wearer’s movements.

But the T-shirt isn’t perfect. While its success rates are impressive, the team notes that anti-AI systems still have room for improvement.

“We show that in both digital and physical worlds, our attack method can achieve 79% and 63% attack success rate (ASR), respectively,” the team’s research paper says.

The project, though is perhaps one of the best yet for fooling AI given that other tricks often require much more cumbersome methods.

Other AI-fooling tech includes everything from bizarre-looking face paint to glasses outfitted with NIR LEDs. The T-shirt design, while relatively odd-looking in its own right, is still much less awkward.

Although adversarial clothing is very much a niche and obscure market, its popularity could rise as AI becomes more prevalent in the real world.

Given that facial recognition software has been known to repeatedly misidentify innocent individuals as criminals, a funky T-shirt may be a worthy tradeoff in the short term as law enforcement increasingly relies on algorithms to fight crime.

Those concerns have led numerous cities across the country, including Oakland and San Francisco, to ban law enforcement agencies from using facial recognition tools.

The American Civil Liberties Union (ACLU) also recently announced a lawsuit against multiple government agencies in an attempt to reveal how facial recognition technology is being used.