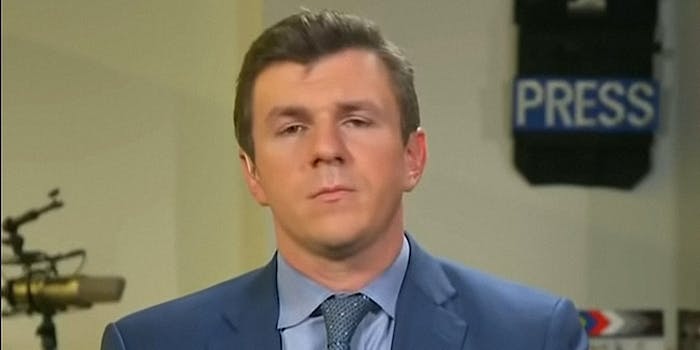 ACLU stands up for Project Veritas after FBI raid

Project Veritas has received a statement of support from the American Civil Liberties Union (ACLU).

Project Veritas founder James O’Keefe’s home was raided by the FBI earlier this month. Agents also searched the homes of two former Project Veritas employees. Federal agents were seeking evidence about the alleged theft of Ashley Biden’s diary. In October 2020, the Biden family reported the diary among items stolen in a burglary.

The conservative-aligned Project Veritas, which secretly films subjects, obtained the president’s daughter’s diary. It didn’t publish it and eventually gave it to the police, Politico reports. A right-leaning website did publish dozens of pages from the diary days before the November 2020 election.

In court, O’Keefe complained that the raids violated First Amendment press protections. He’s asking the court to appoint a special master to review the evidence and determine what federal prosecutors can legally review. Last week, the judge ordered the Justice Department to stop extracting data from O’Keefe’s phones and reviewing evidence obtained in the searches until the court decides whether to appoint a special master.

In general, journalists cannot be prosecuted for using information so long as they didn’t induce or take part in any criminal activity to obtain it. Project Veritas insists its sources assured it that the diary was legally obtained after Ashley Biden “abandoned” it, the New York Times reports.

Project Veritas and O’Keefe are widely reviled by many on the left. The group has been repeatedly accused of selectively editing footage and using inauthentic sources to vilify liberals and others it disagrees with.

The ACLU noted the project’s spotty record in its statement defending it.

“Project Veritas has engaged in disgraceful deceptions, and reasonable observers might not consider their activities to be journalism at all,” begins the statement attributed to Brian Hauss, senior staff attorney with the ACLU’s Speech, Privacy, and Technology Project.

Hauss went on to blast the federal government.

“Nevertheless, the precedent set in this case could have serious consequences for press freedom. Unless the government had good reason to believe that Project Veritas employees were directly involved in the criminal theft of the diary, it should not have subjected them to invasive searches and seizures.”

“We urge the court to appoint a special master to ensure that law enforcement officers review only those materials that were lawfully seized and that are directly relevant to a legitimate criminal investigation.”

People were surprised that the left-leaning organization would defend Project Veritas.

Project Veritas’ attorney Harmeet Dhillon tweeted, “Eight days after the armed, pre-dawn raid of our client James O’Keefe’s home and seizure of his confidential source, legal, & donor info, @ACLU says it’s SO bad, even they are moved to condemn it.”

A screenshot of the statement posted on Project Veritas’ Instagram provoked similar comments. “I mean if even the ACLU realizes how bad this is you know it is even worse!” said one.

The Times reports that the court indicated it would take at least a week to decide whether to appoint a special master.