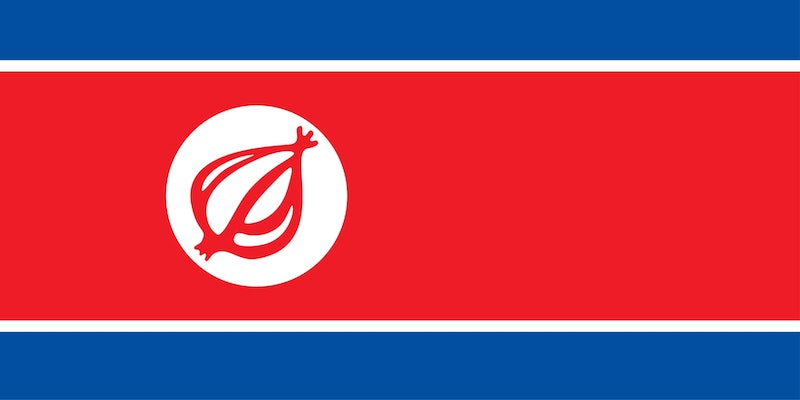 8 moments when North Korea was weirder than the Onion

You can't make this stuff up (unless you're Kim Jong-un).

North Korea, by most accounts, is a terrible place, marred by atrocity and suffering. But as with all corrupt, reflexively repressive societies, there’s a surreal aspect to almost every bit of news that escapes the country. It’s only natural that a satirical news outlet like the Onion would latch onto the rogue nation as a fertile source of outlandish geopolitical humor—occasionally causing international confusion in the process—but the weirdest North Korea headlines have always come from North Korea itself.

Part of this is due to the aggrandizing nature of dictatorship: North Korea has previously claimed that its leader never urinated or defecated, shot five holes in one during his very first round of golf, and once bowled a perfect 300 game. But in addition, the country’s PR team seems to have its finger on the Internet’s pulse, always producing fodder ideal for the likes of Twitter and Tumblr, whether it’s Kim Jong-il looking at things or his son and successor doing the same exact thing.

What does it take for a widely hated totalitarian state to create viral bait that keeps it in the news for all the wrong reasons? North Korea might present a human rights fiasco and a legitimate threat to global stability, yet we’re perpetually amused (or maybe distracted) by its apparent willingness to parody itself. That could be an accident of cross-cultural winds, though at times it feels like a deliberate pattern of deflection: as long as they keep us laughing, the regime can quietly sweep any crime under the rug.

Here are eight instances in which they must have been messing with us—though to what purpose we can’t be sure.

Adolf Hitler famously banned Charlie Chaplin’s The Great Dictator in Nazi-occupied Europe but secretly watched the film twice. North Korea’s foreign ministry, apparently not quite so curious as the Führer, in June promised “merciless” retaliation over the release of The Interview, a James Franco/Seth Rogen comedy about a bumbling attempt to assassinate Kim Jong-Un.

It must be easy to spin fantastic lies about popular foodstuffs when a large segment of your population is starving, but this look into the mindset of a brainwashed Pyongyang student (who also believes that Mickey Mouse is a Chinese creation) seems unbelievable just the same.

What a Hamburger Looks Like, According to North Korea | The Daily Meal – https://t.co/0Y5Mqj32Fg

While some questioned the veracity of reports which claimed that men in North Korea’s universities were obliged to pay respect to their supreme leader by molding their hair in his image, it’s known that the state has a list of approved “socialist” hairstyles—18 for women, 10 for men—that in fact excludes Kim Jong-un’s own hipster-approved “1990s grunge” look.

When North Korea’s government isn’t condemning the decadence and deceptions of the United States, they’re hosting our washed-up basketball stars and enticing us to catch some waves on their eastern coast. “The North American surfers said they had a very good time in a bathing resort,” the Pyongyang Times claimed, “with fascinating scenery and refreshing environment.”

It’s one thing to insist that your haphazardly launched rockets have nothing to do with a visit from a leader of a religious faith verboten within your borders. It’s quite another to attack him for failing to schedule that visit around a World War II liberation anniversary when you didn’t tell anyone you planned to celebrate by testing long-range weapons capable of vast destruction.

The Pope’s North Korea Plea: Pope Francis capped his five-day visit to South Korea with prayers for peace and … https://t.co/zNnFOUj2p1

In another sad culinary blunder, a new recipe reference tool seemed to overlook the general absence of computers across North Korea. Moreover, ingredients like meat and fish are expensive if not unavailable in a region where “an estimated 80% of households lack essential elements for a healthy diet and millions of children are believed to be at risk of malnutrition.”

You might imagine that the headline here says it all, but a picture is worth a thousand deadpan newswire captions (and provides the Internet’s army of Photoshoppers with endless inspiration).