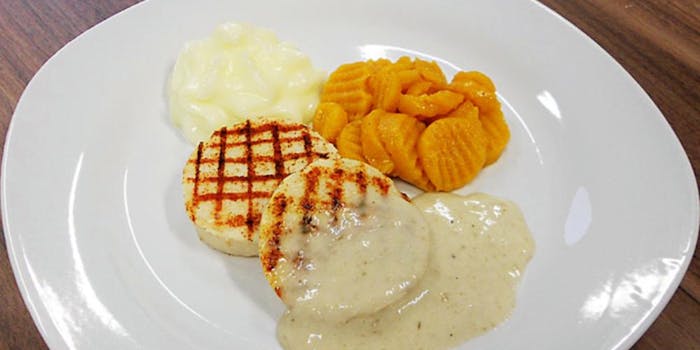 The food is made for people who suffer from dysphagia, an illness that makes it difficult to swallow.

In theory, 3D printed food, like these 3D-printed cowboy-shaped pancakes, sounds like it could be the culinary wave of the future. But in practice, most of it is probably about as appetizing as photos of food from an actual paper printer. Case in point: this 3D food printer from Germany, which a nursing home is using to create food for residents who struggle to eat.

Created by the German tech company Biozoon Smartfood, the 3D printer uses liquefied ingredients in place of the ink that a typical 3D printer uses. The food is softer than most 3D-printed foods because it’s made for elderly patients who have dysphagia, an illness that is common among elderly stroke victims that makes it difficult for them to swallow.

Basically, here’s how the printer works: You put the ingredients in the printer cartridge, and they come out as six different types of food: vegetables (cauliflower, peas), meat (chicken, pork), and carbs (potatoes and pasta). The printer uses a texturizer so the food keeps its shape, and it comes out looking something like this: The food is manufactured off-site and then delivered to people’s homes, but Biozoon project manager Sandra Forstner says the company hopes to eventually install printers in elderly people’s homes, so they can easily print it out themselves.

The question is, though, exactly how good do mushy, 3D-printed peas and potatoes taste? Forstner says it tastes “like normal food,” which is not exactly a glowing commendation; but the ingredients are pre-seasoned and fresh, so one can reasonably assume the 3D-printed food tastes just as good as the majority of the meals that are typically served at elderly care homes. While that’s not exactly setting the bar that high, Biozoon’s work with 3D-printed food for dysphagia sufferers sets a precedent for other 3D-printing startups to create products that are similarly tailored to elderly or ailing people’s dietary needs—and that, in itself, is pretty cool.