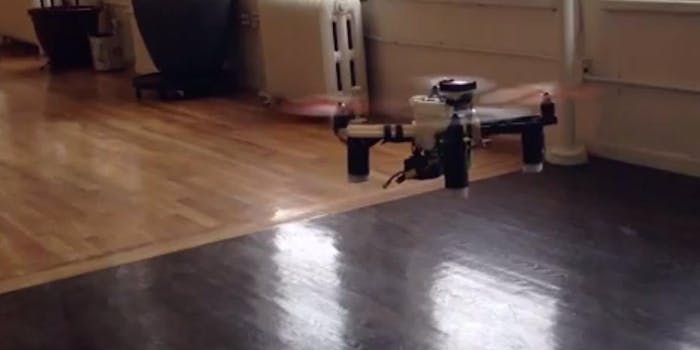 What do you get when you combine two of the most futuristic products in consumer technology? Why, 3-D-printed drones, of course! And now, a Columbia University Ph.D. computer security student, 31-year-old Ang Cui, has provided the Tumblr blog Drones at Home with a step-by-step guide so you can build one yourself.

The body of Cui’s drone was primarily created using his MakerBot Replicator 2X 3-D printer, which creates parts that are “roughly 10 percent plastic, 90 percent air,” writes Drones at Home, which “ensures the parts are solid, while making them as light as possible.”

The rest of the components—battery, motor, wireless transmitter, propellers, and flight controller (“the drone’s brain”) — were all purchased online. It reportedly took 22 hours to finish printing all the pieces of Cui’s DIY drone. Once it was complete, he took it for an indoor test drive.

Despite the craft-like nature of Cui’s drone, building the contraption was neither easy nor cheap. As Drones at Home explains:

If you have access to a 3-D printer, building this drone would cost you about $500, or roughly the same price as one that doesn’t require so much tedious tinkering.

Still, Cui’s drone worked so well that he and some friends even took it out to Central Park, which definitely didn’t freak anybody out.

This is far from last step in Cui’s drone plan. He and his pal Adrian Grabicki, 30, are apparently planning to develop software that will allow them to send their 3-D-printed drone off on computer-controlled missions. Oh, joy.