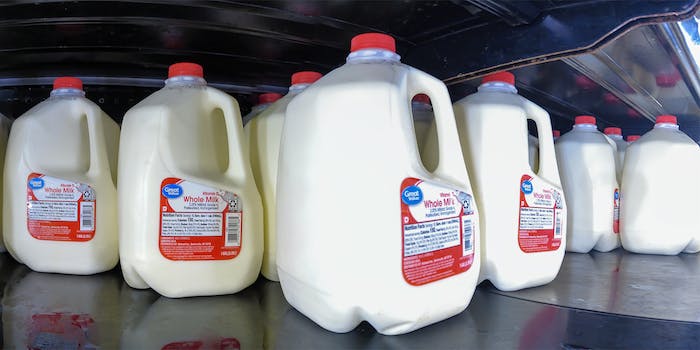 It's a lot of milk. It was even more mockery.

This is a blog post that needs to begin with three caveats. First, inflation has had a very real impact, and it is squeezing the purse strings of the Americans who are least capable of stomaching it. Second, if you have a family, you are free to feed them and support their needs however you see fit. Third, the internet is full of callous, misanthropic East Coasters who often look down disdainfully on middle America, and highlighting their mockery is probably not the best use of anyone’s time

That said, (and we really do mean those three caveats), this lady in Texas is buying a lot of milk.

CNN went down to a suburb of Fort Worth recently, following a couple to a grocery store see how inflation was hurting consumers.

In the piece, the family noted they were eating less healthily, because those prices have gone up the most, as they do their best to shop sales.

The family noted they have nine kids in their house, some biological, some adopted, some fostered, which potentially explains why they were purchasing so much milk.

But still, online, all anyone could gawk at was the phrase “12 gallons of milk a week.”

Some people thought she was lying about the cost of milk at her local Kroger, although the prices she listed match up with what she said.

Still, that’s a lot of milk, but let’s not make fun of the milk lady anymore.