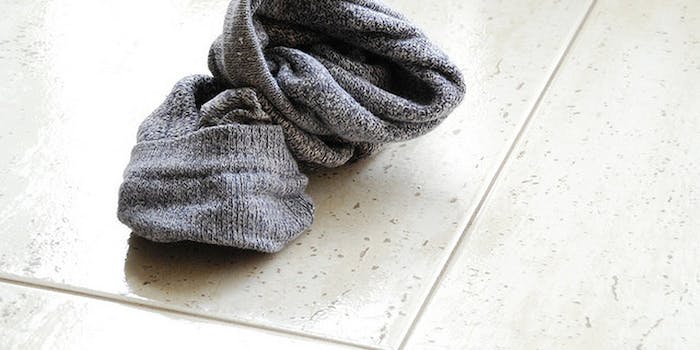 One redditor explains who he turned his smelly, old, used, disgusting socks into a small fortune by selling them on eBay. Really.

Have you ever wondered what to do with those ratty old gym socks that have sat in the corner of your room for weeks?

Well, why not sell them on eBay?

With the help of his girlfriend, TeamYMD auctioned off a pair of used Hanes ankle socks with the back story that they were worn by a “hot college jock,” he said in an email interview with the Daily Dot.

“I really couldn’t believe it,” TeamYMD said in the interview. “My girlfriend was pretty amazed as well. It kind of just snowballed form there.”

Late Sunday night, TeamYMD did a a Reddit IAmA where he answered questions about his used sock empire. The post was insanely popular, collecting more than 1,800 comments and 3,200 upvotes.

TeamYMD sold dress socks, new socks, and random socks he picked up at the Salvation Army. For some buyers, the dirtier the socks, the better, TeamYMD said.

“I shit you not, I found a pair of soccer cleats thrown away in a garbage can outside my colleges soccer field in the dead of winter, frozen in ice,” he wrote on Reddit. “I brought them inside, slipped them on, made up some good story about how they’re ‘super smelly after a rough soccer game I just had’ and took pics and sold them for around $50.”

Selling the socks took some finesse. TeamYMD posted photos of him wearing the socks “pulled tight so you can see my toes through it,” he wrote on Reddit.

It wasn’t just about selling socks, it was about selling a story. And that story was mostly for men with foot fetishes, he wrote on Reddit.

“I didn’t feel sorry for them. I really kept my distance when it came to them contacting me off of eBay (except to buy socks),” he said in the interview. “Sometimes they would ask for more, or ask if I was gay, and I would be straight up with them. I was a college kid making extra money, nothing more.”
It’s been about eight years since TeamYMD has sold a pair of used socks. He’s now married and living in the Northeast. The success of the IAmA caught TeamYMD off guard and got him noticed by a Kansas City radio station who asked him to share his story this morning.

“I NEVER expected the IAmA to blow up like that,” he told the Daily Dot. “I just feel awesome about the people who told me that it made their day and they can’t stop laughing their asses off!”

The Daily Dot asked TeamYMD to share his eBay info with us to see some of his use sock sales. He said that because he sold the socks so long ago, we wouldn’t have been able to trace the auctions and that the sales were private, anyway.

And for anyone looking for some used socks, don’t panic.

There are still plenty to be found on eBay.