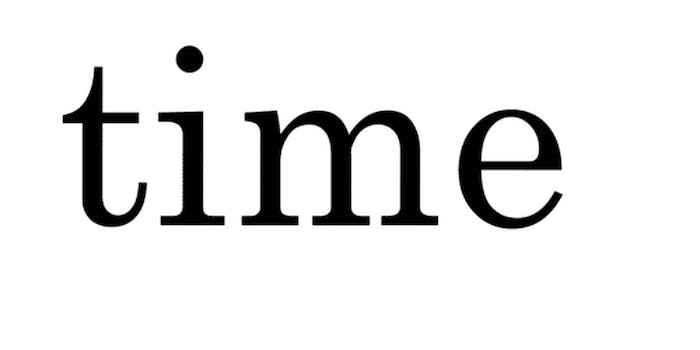 The selt-taught, Austian artist describes his process of putting words in motion.

Actions speak louder than words, and words in action louder still. Austrian Anatol Knotek describes himself as a visual poet and artist, and in his work he gives the normally static the power of movement. The result is both humorously literal and engagingly vital.

“I’m a self-taught artist,” explained Knotek, a 34-year-old who obtained a computer science degree last year. “I started working with text about 12 years ago. It all began with collages like this. Very soon afterwards concrete poetry became the center of my interest – and from this origin, my later work developed.”

For all that time he’s still in school, his positive press in the art world goes back nine years, culminating in recent pieces in the Yale University Press and Halfcircle Journal. This past year his work made the leap into the third and fourth dimensions, and today’s gif has become the working timepiece, “Just In Time.”

“The GIF was actually the prototype, just the sketch. I start with nearly all work at the computer and later transform them to objects or paintings et al…the material and the technique is always special in its way. I love to play with it and with the fascination that the meaning changes with the material. Gifs have a special fascination in their constraints and limitation.

“The GIF is on the one hand just a sketch, but on the other hand ideal for a blog like Tumblr. It’s also placed in a special context there. On the other hand the real object can interact with the audition in the real world, it is a word, it’s a picture, an object and a clock, and it’s none of it at the same time…”

What would he like people to experience when looking at his art? The answer is as inscrutable and layered as the art. “A smile – just a simple, silent smile (and/or a slightly different point of view).”

And why has he chosen typography for his artistic palette?

“Actually, this is what I try to explore with every single work. It is this fascination with language and communication in general. It’s about asking questions, about curiosity, about aesthetics. I’m not a designer, nor a typographer… for me typography is interesting in its details, but it depends on what kind of message I like to transport.”

He has an artist’s eye for fonts, disdaining the hipster’s default Helvetica for something with more inherent graphic flexibility. “I like fonts with round dots, or with drops inside the a.” Once you see his piece “rain” you’ll know why.

All artists struggle with creativity, but a text artist is better-off than someone who works in precious metals. It’s just not as costly a field.

“Most of the work I can’t do has to do with lack of money and time… but I concentrate on the pieces I can do,” said Knotek, who also maintains a robust website, blogspot blog, and Twitter account. “But that’s no barrier for ideas at all, a sketch is done in just a few minutes. For me it’s like planting a metaphorical seed: Some take more time to become a beautiful plant, others pass. …

“My blogs are purely about art with words and not my private life, but my art and my ideas are in a way very private too, I think.”