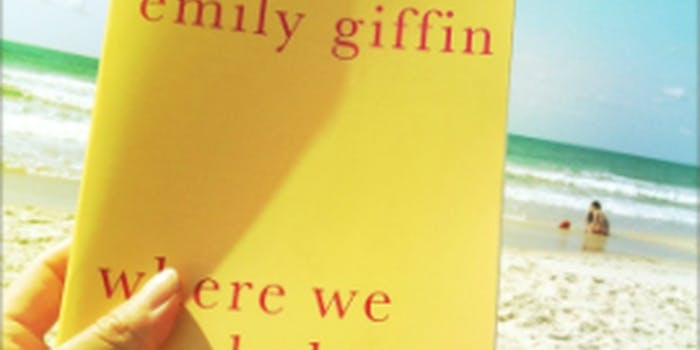 Emily Giffin, author of the New York Times bestseller Where We Belong, encouraged her fans to respond to a negative review on Amazon. The result was what the book-blogging community is calling "a shitstorm."

When she protested one author’s response to negative Amazon reviews, book blogger Coreyann Doyle stumbled into a perfect storm of authorial drama, an angry fanbase, and a defensive book reviewing community.

Bestselling chick lit author Emily Giffin’s husband logged in to Amazon and, in a now-deleted comment, denounced a one-star reviewer of Giffin’s latest novel, Where We Belong, as a “psycho.” After Giffin herself, in an also-deleted Facebook post, egged on her fanbase, Doyle amended her own review of the book to be a one-star criticism of Giffin’s online behavior.

But then, as Pocketful of Books stated in a writeup of the incident, “Emily Giffin decided it would be a good idea to share it all with her Facebook followers and Twitter followers. That’s 115,304 people on Facebook and 26,341 on Twitter. I bet you can guess what happened next.”

Giffin’s call-out of Doyle’s review led to a “shitstorm” on Doyle’s review page. Fans berated Doyle for changing her initial four-star review, and even Giffin’s personal assistant (in yet another now-deleted comment) lamented, “Why can’t she be honest about her feelings ON HER OWN FACEBOOK PAGE?”

The honesty led to countless comments on Facebook and Amazon, while Doyle’s blog post racked up hundreds of comments. Then Dear Author blogged about the incident, calling Giffin’s behavior an example of bullying.

Doyle told the Dot that it’s all a part of the changing nature of publishing’s increased interaction with the media:

“It used to be you got a review in a paper, and the writer was well-liked (or feared) and that was that. If it was bad, you cried to your friends, but you would never go after them because they were revered. If you didn’t like a book you just told your friend, the chances of the author finding out were slim to none and they really didn’t care about the everyday reader because [their opinion] didn’t have much influence.”

After learning that Doyle was receiving death threats, Giffin’s husband apologized, though Giffin would only go so far as to say that if Doyle received death threats, then “she should probably delete her review, or at least stop talking about it.” Eventually, Amazon did delete the review.

Some reviewers on Amazon pointed out that it’s possible to leave respectful reviews. But Doyle notes, “I honestly think that it’s hard to change someone’s mind once it’s been set. No one is going to go, ‘Oh! Thanks for telling me you worked years on this book! That makes it a 5 star book!’ I just don’t see it going anywhere good.”