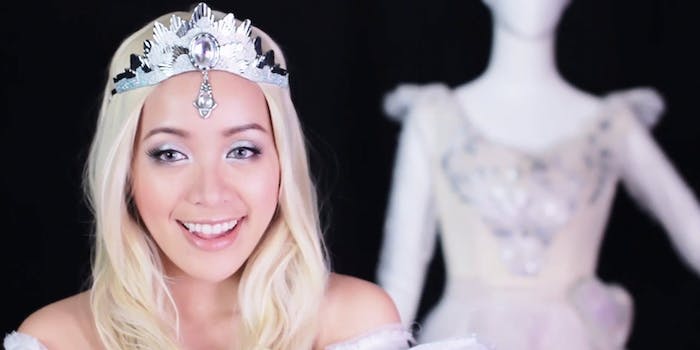 These makeup and hair artists on YouTube can help you achieve a whole new look.

In order to perfect a look or try something new, you need to look no further than YouTube.

The massive video-sharing site has revolutionized personal fashion, offering countless how tutorials that are more informative and intimate than any magazine spread. As such, online beauty gurus are starting to make a mark in the style world. Three hosts rank among the Top 100 most subscribed channels, while Ellen DeGeneres helped turn Talia Castellano, a teen with cancer who posts makeup tutorials on YouTube, into an honorary Cover Girl.

The Daily Dot has curated a list of 10 beauty gurus to check out.

As one of the early adopters of YouTube, Phan established an early presence on the site and has since become the most subscribed beauty channel. She uses voiceovers in her tutorials, offering detailed and visually compelling instruction on everything from movie- and music-inspired looks to everyday tips and tricks. She’s the online spokesperson for Lancôme, so many of her videos will feature their products.

With a background as a celebrity makeup artist and wardrobe styler, Kandee Johnson began making videos in 2009. She runs two blogs while taking care of her four children. Johnson’s been featured on Good Morning America and has been a guest judge on How Do I Look. She’s the one to turn to when you need makeup for a specific occasion.

Megz covers makeup tips for both everyday and night wear. On YouTube since 2009, she frequently rewards subscribers with product giveaways, and she boasts a number of videos on how to maintain and take care of relaxed hair.

Blair Fowler started making tutorial videos upon the suggestion of her sister Elle in 2008. They’ve both been featured on Good Morning America and Seventeen, while Blair was the youngest makeup artist at New York City Fashion Week in 2011. Often shooting in her room, Blair offers product reviews, everyday tips, and giveaways.

Bubzbeauty started her channel as a way to destress during her last year at university, and she’s now the most-subscribed beauty guru in the U.K. She tackles viewers’ questions in her “Ask Bubz” videos (including not-often discussed topics like acne), and as a future bride, she’s now making more wedding tutorials, along with regular hair and makeup videos.

Burr, a makeup artist and beauty blogger, has worked for Laura Mercier and Clinique and assisted many U.K. makeup artists. Some of her videos focus more on the affordable options you could find in a drug store.

Like Castellano, Allie Evans proves that age is irrelevant when it comes to making tutorial videos. Featured by Teen Vogue, Evans focuses on fashion, as well as makeup tips, and she’ll often use her videos to vlog about her daily life.

As a self-described beauty fanatic and makeup obsessive, Fleur uses her channel to feature different looks for different times of the year, product reviews, and recommendations of her favorite products.

As an aspiring makeup artist, Leina shows you how to achieve the look that celebrities like Nicki Minaj, Kelly Rowland, and Rihanna rock.