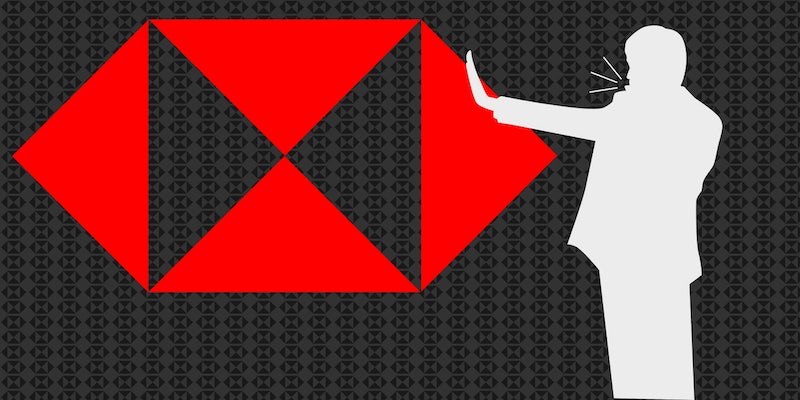 U.K. whistleblower ‘Mr Ethical’ turns to Twitter to save his house

His goes by the name 'Mr Ethical,' and he's about to lose his house.

The wolves are at the door for Nick Wilson.

The bearded 57-year-old meets me at the station in the rickety old town of Hastings, on the south coast of England, famed in this country for the 1066 battle.

In more recent folklore, Hastings is said to have been cursed by the occultist Aleister Crowley at the end of his life. Wilson, who goes by the name Mr Ethical on Twitter, is adamant that he’s been jinxed, too—by his former bosses, who made him a pariah after he blew the whistle on what he claims is massive financial fraud by one of the world’s biggest banks.

After stopping off at the pharmacy to pick up medication for his anxiety and depression, the sandal-clad Wilson shows me into his rundown cottage overlooking the English Channel.

“Look at the view from my study,” he says. Seagulls squawk outside the window. “You can see why I don’t want to lose this place.”

Wilson is a music composer, trained at the Royal College of Music, but took a job in debt recovery in the 1980s to pay the bills. He handled the account of the John Lewis department store’s customer credit card.

“One of my biggest cases was an African prince who bought a big house in London,” Wilson says. “He hired an interior designer to buy him everything he needed from John Lewis. He spent a fortune on it, and didn’t pay. I ended up getting a worldwide injunction to freeze his accounts. It was great fun.”

Work as a debt collector stopped being fun when Wilson worked for Weightmans solicitors based in Liverpool, where he was charged with collecting arrears for John Lewis on behalf of the now-defunct HFC bank, which had bought the retailer’s debts, a process known as “white labelling.”

From the very first day, Wilson claims he told the bank and his bosses at Weightmans that HFC was adding illegal amounts—“collection charges” or “contingency fees”—of 16.4 percent to the debts he was tasked with recovering.

But his bosses didn’t want to know. “They sidelined me. They hung me out to dry. They sacked my team.”

While working at the law firm, Wilson says his boss nicknamed him “Mr Ethical” for flagging up the arbitrary fees and charges. Getting nowhere with the company’s internal procedures, Wilson eventually took his claims to a U.K. regulator, previously known as the Law Society, which merged with the Solicitor’s Regulation Authority (SRA) shortly after Wilson contacted the agency. After Wilson reported it, the SRA decided the charges broke the U.K.’s financial rules. However, the regulator decided to take no action because, as the SRA ruling states in its response to Wilson, the fees were only added “in a small number of cases.” Wilson estimates these cases to be worth around £100 million at the time he left the company.

Following the lackluster outcome with the SRA, Wilson was made redundant and paid off. His former employer tried to buy Mr Ethical’s silence with a gagging clause, which he signed when he took the money.

I handed this to HSBC chair last Nov. He has done nothing pic.twitter.com/dFmwsn49wZ but then he has @TheFCA on his side.

Settlement paid, Wilson sold his house in London and downsized to Hastings. He worked briefly as a consultant for another law firm, Leigh Day, where he hoped to take on class-action lawsuits on behalf of people who had been wrongfully charged by HFC (which was bought by London-based behemoth HSBC in 2006) and other banks. But this fell through when Leigh Day found a conflict of interest in the case, meaning it couldn’t both represent HSBC—one of its clients—and sue it at the same time.

Wilson has been unemployed for the last three years. Despite having 30 years’ experience working on complex debt-recovery cases at law firms, he says he was recently turned down for a job in an insurance company’s call centre.

“They said it’s because you revealed confidential information.” Recently he applied for a job as a dustman [garbage collector] but didn’t get it. “I can’t get a job.”

In 2011, shortly after becoming unemployed, Wilson took an unpaid position in what must be one of the world’s shittiest professions—whistleblowing.

But as Edward Snowden will attest, there is more to the gig than hemorrhaging confidential information. To attain any kind of security when his card is marked by the world’s most powerful people, the whistleblower often finds his best option is to hide in plain sight, where the world can supposedly play watchman.

As with his previous work as a debt collector, Wilson went about his new work with diligence. He leaked pretty much everything he had kept from his time handling the John Lewis/HFC account onto his personal website, and repeatedly accused the bank of fraud to anyone who would listen, and plenty of people would wouldn’t.

“I thought if people are concerned about me breaching confidentiality, I’ll put it all in the public domain,” he says. “I knew I was breaching the gagging clause and could be sued by Weightmans. But in a way, I wanted to be sued because it was the platform I needed.” Wilson takes a drag of his rolled-up cigarette and shakes his head, as though recounting one final kick in the teeth. “But they didn’t.”

Either way, Wilson claims he hasn’t broken the confidentiality agreement, since the Public Interest Disclosure Act (PIDA) voids gagging clauses when illegal activity is being covered up.

In the winter of 2011 the whistleblower signed up to Twitter using the handle sarcastically given to him by his former boss. “I kept saying, this is illegal, you shouldn’t be doing it,” he recalls of his time at Weightmans. Then his boss would say, “Oh, here comes Mr Ethical, again.”

It was around this time Mr Ethical began courting press attention. But he seems just as angry with the media as he is with his former employers. “I’m livid with the Guardian,” he says. “They’ve totally ignored me. Utterly ignored me.”

Wilson doesn’t just burn his bridges, he incinerates them. Smoking with quiet fury, he recalls how in 2013 he got into a row with the satirical magazine Private Eye. It’s the publication most likely to take on a complex financial story, and has been sympathetic to whisteblowers in the past.

After pestering the editors, Private Eye commissioned an article based on the information Wilson supplied them with. But after the story was spiked, he took a flamethrower to his links at the Eye, posting a draft of the article on his website without the magazine’s permission.

All the time, the former debt collector had been falling behind the mortgage payments on his Hastings home. He owed just over £1,500 to Northern Rock, the first UK bank to go belly up in the credit crash in 2007 before it was bailed out by the government.

The consequences of whistleblowing pic.twitter.com/I0ahTkXLtR

In February 2014, Wilson received a repossession order from the bank, giving him until the start of May to make up the arrears. “It’s the state that owns this house,” he says. “They told me it’s in the taxpayer’s interest to make me homeless.”

By the time the foreclosure notice came down the pipes, Wilson was already severely depressed. He was classified as unfit for work by the government and received disability payments, although not enough to cover his mortgage.

(Following our interview, Wilson contacts me to say he has just received a phone call from the Department of Work and Pensions, stopping all his benefits payments. In a recent “Work capability” assessment by notorious private health assessor Atos, Wilson scored “zero” points, passing him as fit for work. This means he will have to find even more money each month to keep up his mortgage repayments.)

“This is the reality,” he says from his armchair. “My life is fucked, basically, because of this. Ten years of extreme stress that I’ve lived under. I’ve got high blood pressure. I’m on antidepressants. It’s ruined my life.”

With no other avenues left to explore, Wilson set up an online “Fighting fraud fund,” and began soliciting donations via PayPal, and promoting his plight on Twitter, where he has amassed over 1,000 followers.

“On the first day, I got over 200 quid,” he says, while checking his iPad. “I was just amazed at the goodwill there is on Twitter.”

At the time of writing, Wilson has received £826 from supporters, which still leaves him £1,276 in arrears. He goes to court on May 2, where there is a very real chance his home will be repossessed.

Still, he says, “I’m determined not to lose this house. It’s a small, modest house, but I love it. It’s not expensive. It suits me. It’s quirky. I’m quirky. I want to die here and I’m determined to keep it.”

Wilson is a prolific Twitter user, bashing out up to 50 tweets a day. “I still make a lot of mistakes in my tweets because of concentration,” he says.

One reason I haven’t been able to get my story out is people think I’m nuts. This Harley St shrink didn’t think so https://t.co/kdbw8shyE6

“A lot of people said to me, write a book. But because of my depression, I don’t have the concentration to write a book. I can’t read a book. Twitter suits me perfectly because 140 characters is about the limit of my concentration.

“Because of my depression, I spend a lot of time in bed. I tend to tweet in bed. But it’s my lifeline. My supporters are just fantastic. They give me so much. I don’t retweet praise, but it means a lot to me when I get it.”

But Wilson is also paranoid, as anyone who has ratted on one of the world’s biggest banks may have cause to be. “I was a bit scared last night because my website went down,” he says. “I thought, this is very spooky, but it’s up again now.”

He claims HSBC check his website “virtually every day.” How can he be so sure it’s the bank? “I’ve got spy software that shows me who’s looking at it,” he says.

A lot of people say things on Twitter that they wouldn’t dare say in person. “I’ll say anything I’ve said on Twitter to somebody’s face,” he insists. “Last night I said, ‘You’re a fucking hypocrite’ to [Guardian editor] Alan Rusbridger. I’d say it to his face if he was sitting here.”

Since letters from his M.P. do nothing to stave off the bank, Wilson is still banking on the media for justice.

“I’m hoping when the story breaks and I do get interviews and stuff, they’ll refer to me as Mr Ethical,” he says.

I wonder if Mr Ethical is a bit of a lofty title to bestow upon yourself, even if it’s a reference to your old boss’s sarcasm? “I know it can sound pompous, but nobody would seriously call themselves Mr Ethical, would they, surely?

“It’s a fine line, but I’m going to stick with it. It’s doing that—,” Wilson says, as he flips his middle finger to his old bosses and the banks.