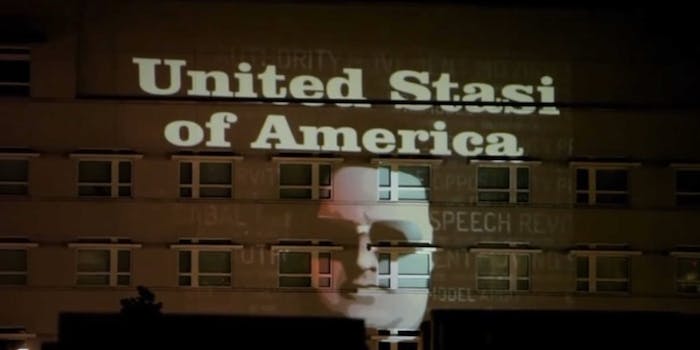 German police are on the hunt for a man who briefly projected the phrase "United Stasi of America"—and Kim Dotcom's face—onto the U.S. embassy in Berlin.

German police are on the hunt for a man who briefly projected the phrase “United Stasi of America” onto the U.S. embassy in Berlin.

The German newspaper Der Spiegel reported that a city spokesperson confirmed Friday they were searching for the man, suspected of violating a law against “insulting organs and representatives of foreign countries.”

There’s little doubt of who did it. Late Sunday evening, light artist Oliver Bienkowski filmed himself driving near the embassy, setting up the light projection, then leaving after getting harassed by a woman who appears to be either a cop or security guard.

Bienkowski appears to be upset with revelations that through programs like PRISM, the NSA spies on, well, pretty much everyone, and that any foreigner can easily be tracked. Germans, in particular, are thought to be the NSA’s biggest European targets.

I defaced the U.S. embassy in Berlin with a truth-projection last night. 0wned! pic.twitter.com/b6qbw4L0UH

Even if Bienkowski gets off without a fine, the project will wasn’t free. He told Der Spiegel the project cost him €5,000(US $6,523) out of his own pocket.