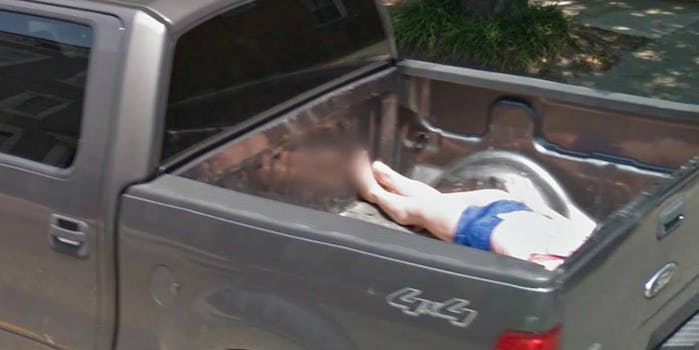 Is this a dead body in a pickup truck on Google Street View?

What appears to be a headless woman with her feet turned at opposite angles seems to be lying in the back of a Ford truck on Google Maps.

There are probably all kinds of reasons for why what appears to be a headless woman with her feet turned at bizarre opposite angles seems to be lying in the back of a Ford truck that Reddit spotted on Google Street View this weekend.

If it’s a mannequin, it’s a mannequin with unusually well-defined calf muscles. If it’s a woman enjoying the sun, why is she lying on a flat metal truck bed with no covering in the middle of the day? And where on earth is she stashing her head?

While it’s unclear what the murderous perpetrator could possibly doing driving around a corpse in broad daylight, the photo, snapped in Wilmington, N.C., last summer, shows the truck in a location only a block away from the water. Perhaps they were on their way to do some impromptu dumping?

Reddit was awash in speculation, with members of the r/WTF forum scrutinizing the shape of the truck bed, the reflections in the cab, and whether Google’s photo processor had distorted and blended two women into one strange image. Above all, everyone was confused by the bizarre angles of what few limbs they could see.

Redditor how_tohelp noted that it wasn’t just the right foot that seemed to be turned completely around:

The arm seems to be draping awkwardly as well, with the thumb facing incorrectly upward for the way it would naturally lay meaning that the elbow would be facing upward while laying on your back.”

Taxidermy_otter seconded, commenting on the fact that most people wouldn’t really lie with their head away from the cab:

[T]he truck is moving forward (I assume), during which time the girl would be propelled back, thus resting/hitting her head on the truck bed door. Hopefully reading [too much] into it, but things are looking kinda suspect.”

Though suspicions were high, it wouldn’t be the first time the Internet had gone into conspiracy mode over Google Maps murders. Most recently, in April, Google appeared to have captured another possible watery burial in progress, when an image from the Netherlands, taken in 2009, seemed to show a man dragging a bloodied corpse to the end of an isolated pier.

More likely scenarios floated are that the truck was hauling parts for Iron Man 3, which was filming in the area at the time the picture was shot, and that the girl was simply crouched at an awkward angle because it’s illegal for anyone under 16 to ride in the back of a pickup in North Carolina.

Either way, in the words of hamperedcamper, “I hope to God someone who knows better than me can give a comforting explanation.”

Investigators have reached out to Google, but had no luck finding someone who can give them more information about the photograph. Witkowski plans to follow up with the tech giant.

“It’s just one of those things that when you have something that big, you have to go through legal and all that,” he said.

In addition, police have reviewed missing persons files to see if anything matches what they can make out from the picture to no avail.

UPDATE #2: Star News Online confirms that the Wilmington Police Department has closed the case, having determined that the figure in question is a Coast Guard search-and-rescue dummy named Oscar. At ease, Reddit!

“They recognized the car and said, ‘This is our vehicle with an Oscar in the back,'” Cangemi said.