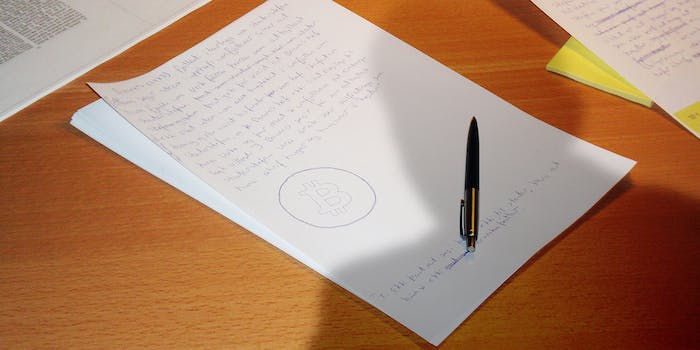 Behind the Deep Web’s black market for term papers

With finals in full swing, students are turning to the Deep Web for help.

College tuition is rising, wages are stagnant, and student loan debt is about to become a national crisis. So how can students pay the costs off before they’re buried beneath them?

Cheating is always an option.

Selling essays and homework is a business that is as old as school itself. Sites like Unemployed Professors churn out college papers on the regular—and with varying degrees of success.

But the real dirty work is taking place on the anonymous Deep Web, removed from prying eyes and public scrutiny. There’s a growing and global black market of students willing to pay thousands of dollars in bitcoins for top grades.

The most successful pro paper writer on the Deep Web is a self-described “broke student” who goes by Mr. Mackey, a play on the name of the strange but caring school counselor in South Park. In just the last few months, the Deep Web Mackey has booked dozens of clients that have earned him several thousand dollars.

“What matters to a student is a good grade,” Mackey told the Daily Dot, “and being free from suspicion from plagiarism, as well as not wasting their time on a paper that they deem is busywork from a class they may be required to take but don’t need.”

By capitalizing on the popularity of Bitcoin and the Deep Web black markets, Mackey has built a brand as a strong, trustworthy writer that students are willing to pay extra for. As a student himself, he has access to top academic journals and scholastic databases, and can hit a wide range of subjects, from economics to Spanish. Thanks to the magic of Google Drive, you can even watch him write your homework to see how he works.

Potential customers browsing the black markets will see Mackey’s sociology papers listed next to a seemingly endless supply of drugs like heroin, pot, and ecstasy. Mackey’s best advertisement is his most straightforward. The ad copy reads: “Mr. Mackey’s Homework Help – I do your papers while you do drugs (or whatever you want, I’m not judging, yo.).”

Underneath, dozens of customers talk about the service. The worst experience—a grade of 71—is met with a partial refund and a long letter of apology.

“Mr. Mackeys essay services literally saved me from having to repeat an entire semester,” one customer wrote recently. “I didn’t do shit this semester because i been ordering too many drugs and being an idiot and i fell behind to say the least.”

“My teachers were so impressed with the work that they were telling me how much potential i have as a student and that if only i got it in on time I would have gotten an A in the class,” the customer continued. “But i still pulled off B’s all thanks to Mr Mackey i couldn’t thank this guy enough.”

Mackey, who says he is a fifth-year senior in an American university, spends anywhere from one to six hours per day writing for his clients. That’s on top his own school work. The increasingly successful enterprise leaves him with little time for a social life.

“I don’t have much of a work-life balance during the school semester,” he said in an email. “During the summer it is more balanced, but I hope to ‘counsel’ some clients during this time as well. I could probably give them a discount at this time, as I have more free time to write papers.”

With final exams taking place now across the country, Mackey has been booked solid for weeks and has had to turn down dozens of requests for essays.

In his absence, plenty of other businessmen have popped up on the Deep Web. Mackey’s operation is in self-described “beta testing” but he hopes that one day it can be polished and sustainable. He believes that if a real digital, anonymous economy kicks off—maybe on the black markets he already frequents or on decentralized markets like OpenBazaar—essay writing on the Deep Web will only get more popular.

“I don’t think teachers can defend against this,” he said. “Websites like turnitin can’t detect or understand stylistic elements in writing.  As long as plausible deniability exists, a teacher can’t screw over a student with a 100% original paper.”

Can Mackey pay off his tuition with the business? That depends.

Mackey claims he’s made thousands in just a few months of operation, but it’s come with a pretty big asterisk: Bitcoin has been a roller-coaster investment.

In 2014 alone, Bitcoin has gone from $985 to $437. Mackey has held his bitcoins and says the currency has cost him “significant losses due to the past crashes of Bitcoin’s price.”

He’s got a working business and a steady supply of potential clients. If he can figure out the payment system—transferring bitcoins immediately to U.S. dollars makes the most sense—we’ll likely being seeing much more of Mackey and his competitors’ work hitting professor’s desks next fall.

Photo by gudmd.haralds/Flickr (CC BY 2.0) | Remix by Max Fleishman