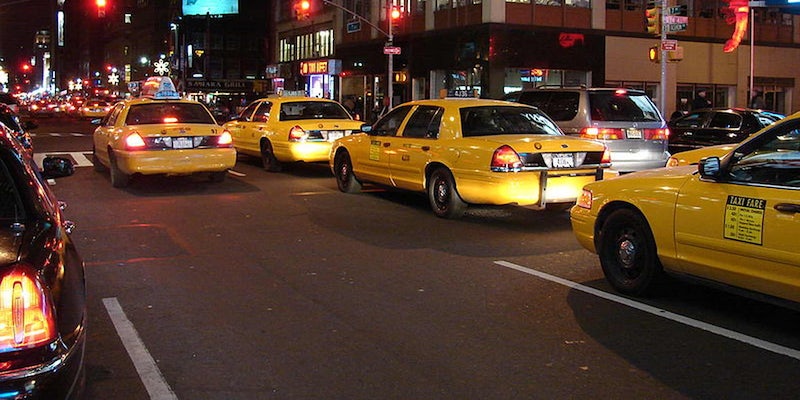 Stick it to Uber by hailing a taxicab with your smartphone

Just like in the olden days of three years ago.

Uber has always been a hard company to love.

The ride-sharing app’s entire business model for entering new markets rests on flagrantly  breaking the law. The company is being hit with widespread protests from angry drivers who claim they’re being exploited. And its relationship with competitors is equally contentious: Remember when Uber used thousands of burner cellphones to order, and then abruptly cancel, rides from competitors like Lyft?

But it was was the recent revelations of Buzzfeed editor Ben Smith that finally opened up the floodgates. Smith on Monday reported that a top company executive was considered employing a team of researchers, armed with the company’s own ridership data, to dig up dirt on a prominent female tech journalist who has been open critical of Uber.

Is the ferocity of the media attention devoted to scandal the result of it being a journalist, rather than a civilian, that Uber Senior Vice President Emil Michael talked about targeting? Almost undoubtedly. But, the story seems to have pushed Uber’s bad behavior front and center.

Fortunately for customers, there is a way to have easy access to car transportation without giving up convenience—and without supporting a company that has consistently shown that it puts its own success above everything else.

While Uber CEO Travis Kalanick apologized via Twitter for his employee’s gaffe—a move that The Awl pointed out was undermined by Kalanick’s avatar being “literally a picture of money”—it was too late. The floodgates were open and the Internet had turned into a giant Uber hate machine, with even people like tech blogger Robert Scroble calling for Kalanick’s ouster for fostering a culture of toxicity.

Over the past few days, Uber has gone from a company that was seen as such a paragon of the new high-tech economy that not only were congressional Republicans circulating petitions supporting in its battles with transit regulators across the country, but top Obama administration officials scrambled all over each other to take a job at the company leading those very battles.

Now that the luster has at least partially faded and the Pentagon has taken steps to distance itself from the Uber executive that made the statements, there’s a growing sense among the millions of people across the country (like humorist John Hodgman, for example) who use Uber to get from Point A to Point B that they might want to switch to one of Uber’s competitors as a way to avoid supporting a company that doesn’t even pretend to follow Google’s “don’t be evil” mantra.

There are a lot of very successful companies that manage to be extremely profitable with a large portion of their potential customer base thinking they’re pure evil. Comcast may be the most hated company in America, but switching from Comcast to another Internet service provider is complicated, time-consuming, and maybe even be impossible—if Comcast is the only company offering high-speed Internet service in your area.

Uber, on the other hand, is almost comically vulnerable to user defection. Deleting your Uber account may be considerably more difficult than it initially seems, but picking another transit app is as easy as clicking the icon in your smartphone right next to the one for Uber. As with anything that attracts attention in the tech world, Uber’s success has bread a legion of imitators offering nearly identical services.

If you no longer want to patronize Uber, you could use Lyft or Sidecar, both of which employ a fleet of amateur drivers. Or you could try Gett—which only hails fully-licensed professional drivers, pays them well, and doesn’t employ the Uber-inspired surge pricing model that’s drawn considerable ire. But, if you want to pick a transit option based on doing good in the world, the best thing you can do is use a taxicab.

Yes, an honest-to-goodness yellow taxicab. Yes, just like in the olden days. And yes, there is an app for that.

The best way to conceptualize transit networking firms like Uber and Lyft isn’t to think of them as technology companies, rather to see them as engaging in regulatory arbitrage.

Driving a cab is kind of a huge hassle. In San Francisco, where Uber and Lyft are both headquartered, getting the necessary medallion to drive a cab costs $250,000. Since the city puts a hard cap on the number of medallions in circulation at any one time as a deliberate mechanism to reduce competition for cabs already on the road, the waiting list to even get the opportunity to shell out a quarter of a million dollars for the privilege of driving a cab can stretch on for years.

This type of tight regulation is virtually universal across the United States. Local governments tell taxi drivers things like how much they’re allowed to charge passengers, where and when they’re allowed to pick up passengers, what computerized terminals they’re have to put in the back of their vehicles, what annoying promotional videos those terminals are required to play, how much they have to pay to pick up or drop off passengers at the airport, what special license plates they have to buy, how much insurance they need to carry, and what font they’re allowed to use on the outside of their cabs. In Seattle, there’s even a rule that tells taxi drivers what style of shorts they’re allowed to wear—”Bermuda shorts … that extend down to within two (2) inches of the top of the knee cap.”

Taxi regulations date back to the Great Depression, when a large portion of America’s car-owners were thrown out of work and decided turning their personal automobiles into cabs might be a good way to make ends meet. There was little regulation and the taxi market quickly turned into a free-for-all, with uninsured cabs getting into accidents that injured passengers and extreme competition cutting wages to the bone.

Realizing that cabs were an integral part of the public transit infrastructure, cities limited the number of cabs on the road to ensure that drivers could maintain a decent income and set fare rates to prevent price gouging. Lawmakers put in place insurance and other safety requirements to keep everyone as safe as possible, as well as establishing rules like mandating that cabs take passengers anywhere they want to go within city limits.

While Uber’s classic towncar service has to deal with some of these regulatory burdens, its ride-sharing UberX service doesn’t. The taxi industry has estimated that, as a result of being able to skirt compliance obligations, operating a ride-sharing car is 40 percent cheaper than driving a taxi.

As a result, ride-sharing companies have been able to cut their prices relative to cabs, while offering essentially the same service, in a way that cab companies are legally unable to respond to.

Services like Lyft and Uber can be cheaper than taxis when they want to be, but they can also be far more expansive. One of the reasons why governments set taxi prices is to ensure that every time someone gets into a cab they know exactly how much they should expect to pay. Uber has the ability to enact surge pricing and charge drunk people $362 for a 20-minute ride; with cabs, you know exactly what you’re going to get because they all only charge one rate all the time.

Price isn’t the only advantage that app-based transit networks have over taxis due to their different regulation requirements (when they have regulation requirements at all). They make standing on a chilly street corner, index finger to the sky, a thing of the past; they make paying with a credit card a breeze rather than guaranteeing you’ll end up in an argument with a cab driver who’d much rather you pay in cash; they ensure that the car you requested will actually show up instead of picking up another passenger off a closer corner, leaving you to freeze to death.

But, here’s the thing: There are smartphone apps that let you retain all of those advantages, while hailing a fully-licensed taxicab with a driver who has paid his or her dues and is legally barred from charging you an arm an a leg. Taxis may have been slow to get into app game, but they’re finally arrived, with apps like Curb, Flywheel and HailACab.

“Curb works with 90 reputable taxi companies in 60 US cities. Nationwide, we connect to over 35,000 drivers by working with taxi companies and integrating into their existing dispatch systems,” Curb CEO Patrick Lashinsky told the Daily Dot in an email. (Curb was formerly called TaxiMagic.) “This model not only helps us provide our riders with the largest supply of taxis in any given city, it also ensures that all the drivers on our system follow local rules and regulations around licensing, background checks, vehicle inspections, pricing, and safety.”

Lashinsky insisted that Curb has used its technology to solve a lot of the problems that made regular taxicabs a hassle. The app processes credit cards, rates drivers and ditches ones that don’t show up as promised, as well as earns more money for drivers than picking up fares on the street—which makes them more likely show up.

None of these companies have, as far as we know, ever threatened to dig up dirt on a journalist out of spite or pushed drivers to revolt.

Uber’s follies have put its competitors in a place where there’s a strong business case to be made for practicing the highest possible levels of corporate responsibility. Whether they can live up to it is an open question, but at least there’s a powerful incentive to pay near-obsessive attention to how they are perceived by a likely hyper-critical public.

“I’m appalled on multiple levels by Uber’s recent actions. Uber is becoming a threat to their own consumers,” said Rakesh Mathur, who was announced as the new CEO of Flywheel on Thursday. “Starting from their CEO’s tirade where he refers to the taxi industry as ‘assholes,’ going onto the careless and carefree way they violate their users’ privacy by tracking individuals, to their recent threat to dig dirt on journalists that have questioned their ethics, they have demonstrated just one thing—a culture that has created an assembly line of assholes, where from the top down they violate the fundamental rights of their customers and blithely threaten to use private information to attack them.”