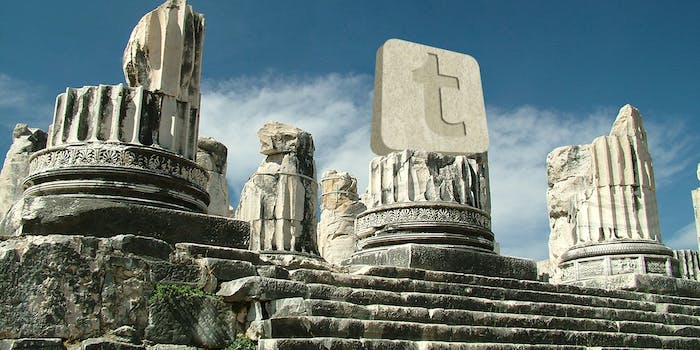 The real origins of Tumblr

Lost in the storylines surrounding Tumblr's $1.1 billion acquisition by Yahoo has been the early influence that the sites anarchaia and Projectionist had on David Karp.

Months before Yahoo’s $1.1 billion acquisition turned him into an overnight media sensation, David Karp recounted the creation of Tumblr at the Austin Convention Center during the South by Southwest Interactive conference in March.

“I wanted that presence myself. I wanted an identity to be proud of,” he told the capacity crowd.

“I tried all of the great tools that were around at the time—WordPress, Blogger—and obviously all the specialized tools—Flickr for photos and YouTube for videos—and I kept falling down. I was perfectly happy with all these tools but at the same time, constantly frustrated by the limitations imposed by all of them.” 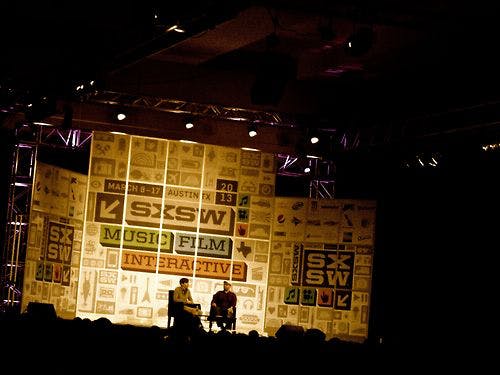 The story resurfaced time and again this week in the wake of the Yahoo deal, a move that injects the aging search giant with a massive and energetic mobile audience that’s behind more than 100 million blogs on one of the 10 most-visited sites in the U.S.

“Not only are David and Tumblr made in New York, they have helped us make a better New York,” New York City Mayor Michael Bloomberg trumpeted in a highly publicized Yahoo press event Monday afternoon. 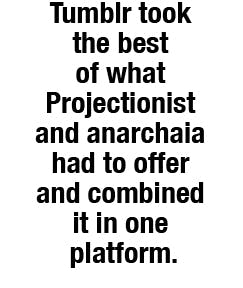 “As Ed Koch said, ‘This is where the world comes to audition.’ And I think David is a great validation of that story; He’s turned his innovative ideas into indispensable services used by millions of people every day.”

But there’s a notable hole in Karp’s Tumblr narrative, a major piece of the puzzle that’s routinely overlooked.

Karp wasn’t the first person to create a tumblelog, the term used to describe the stripped-down blogging and content curation he has become known for. He wasn’t even the second.

The true origin of Tumblr involves a German and an American, hundreds of lines of code, and their common desire to change the way we think about blogging. 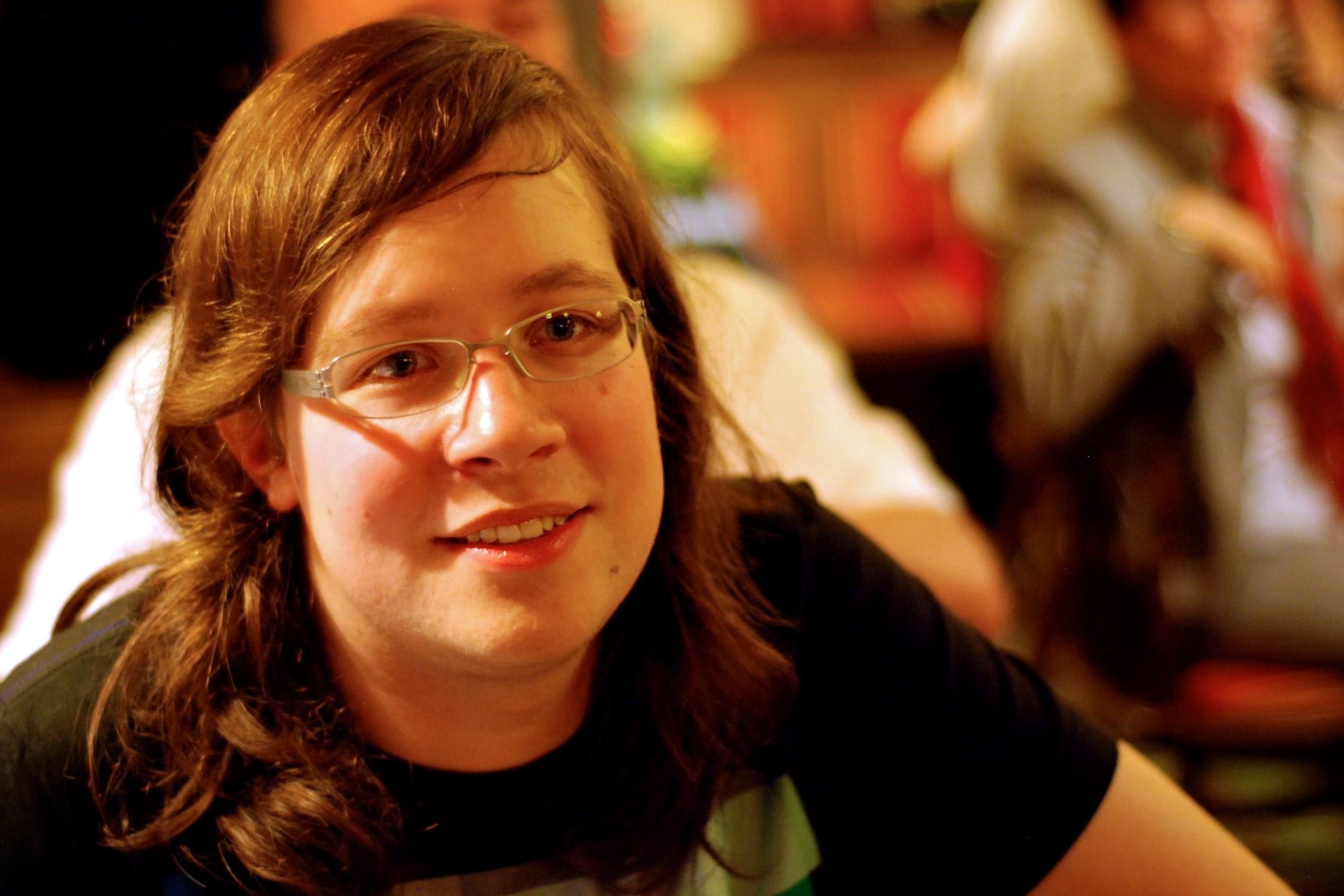 It all started in March 2005 with a high school student halfway across the world: Chris Neukirchen, a 17-year-old coding whiz from Biberach an der Riss in Germany who spent his free time on the Internet Relay Chat (IRC) talking about Ruby on Rails, a fledgling open-source programming platform. This was the golden era of blogging platforms like Blogger and WordPress—clunky platforms with high barriers to entry that allowed users to post using customizable content management systems.

“I already had a blog with longer articles, and it felt inappropriate to spam it with such short pieces of content,” Neukirchen recalled to the Daily Dot. “So I decided to make a separate site with a list of interesting links, quotes, and pictures I wanted to share. It turned out I digged up enough things to publish this list daily.”

Neukirchen called his new invention “tumblelogs,” a combination of “tumble” and “web-logging” coined by a user of redhanded.hobix.com, a now-defunct Web-programming site, according to Wired UK. Neukirchen’s blog anarchaia, which was described as an “experimental, impressionistic sub-paragraph tumblin’ (think obstsalat) [which is German for fruit salad],” was built using Ruby on Rails and edited with Vooly, a template language. 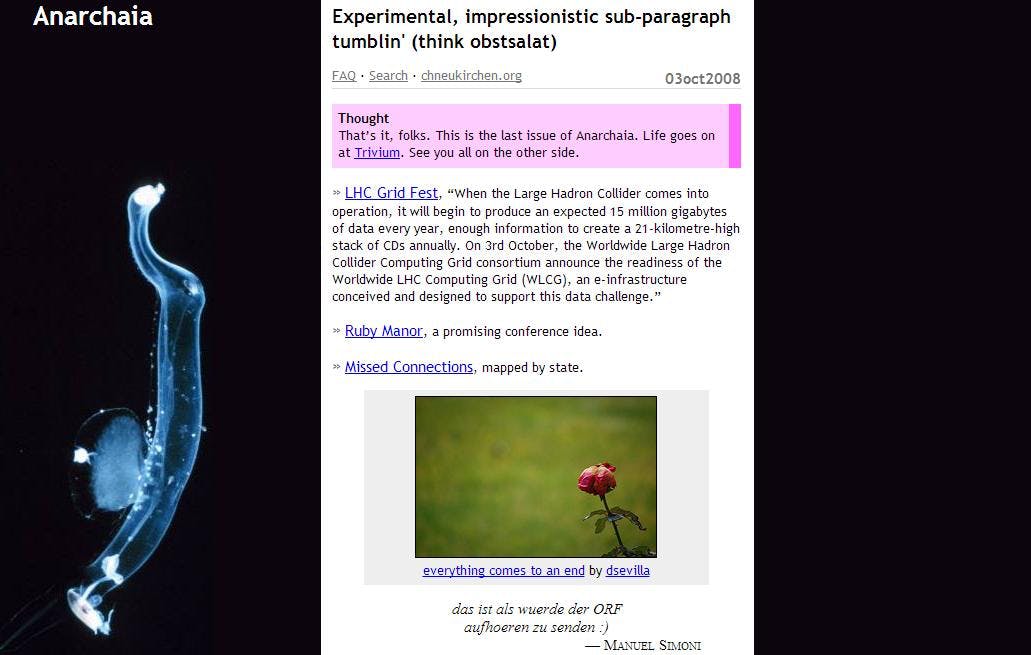 The site was extremely simple and contained a simple archive system where posts were organized by month and year. In the middle of the site was a large white column where the content existed, a trait that closely resembled the first iteration of Tumblr’s dashboard. The blog posts on anarchaia were completely freeform, typically containing pull quotes, links to articles Neukirchen found interesting, IRC chat logs between friends, and random images Neukirchen found around the Web, all piled all on top of a line break and small timestamp.

The only rule of anarchaia, as mentioned in one of the first posts on the site, was to keep editorial content to less than a paragraph. 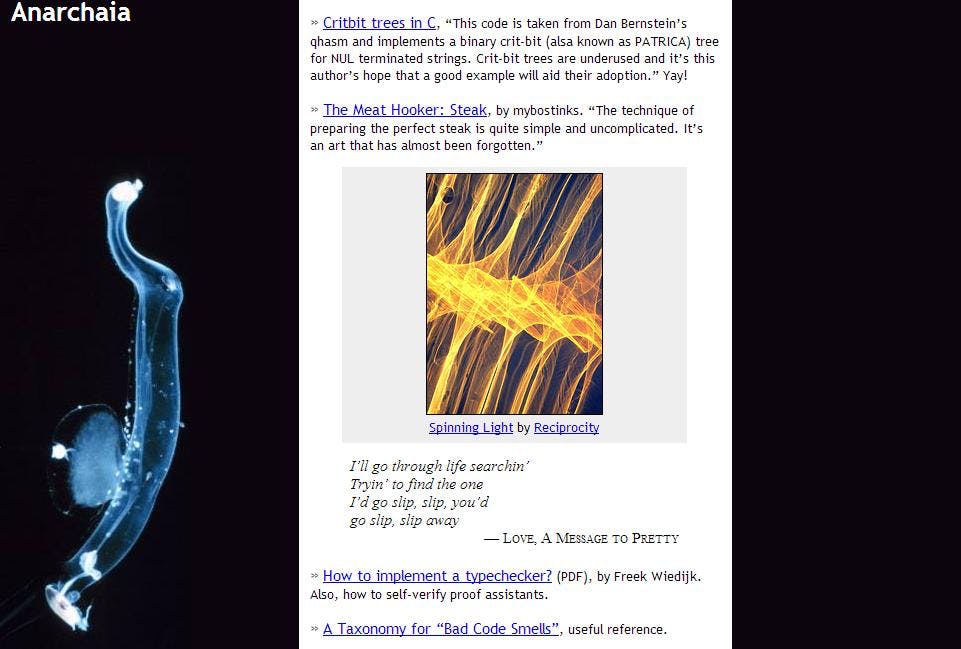 The site also attracted the attention of programming wunderkind Marcel Molina, who was was living in Chicago and working with his friend Sam Stephenson as a Ruby on Rails consultant for the popular Web-messaging app Campfire. With little time and patience to set up a blog on WordPress or Blogger, Molina embraced anarchaia’s simplicity and saw areas where it could be improved.

“It was programary, kind of raw,” Molina told the Daily Dot. “We wanted to create a cohesive narrative that was heterogenous and visually attractive as a group.”

The result was Projectionist, the world’s second tumblelog. 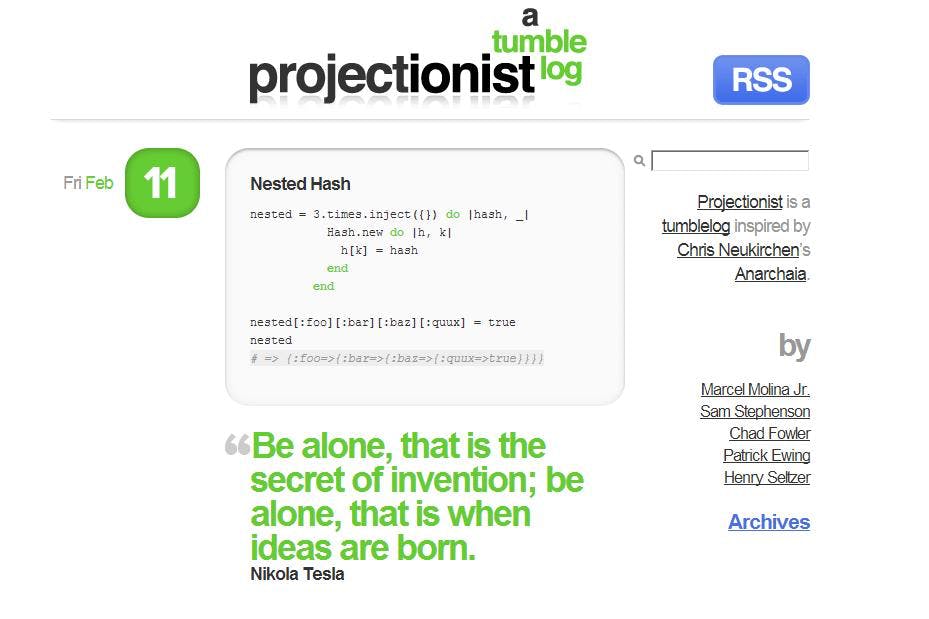 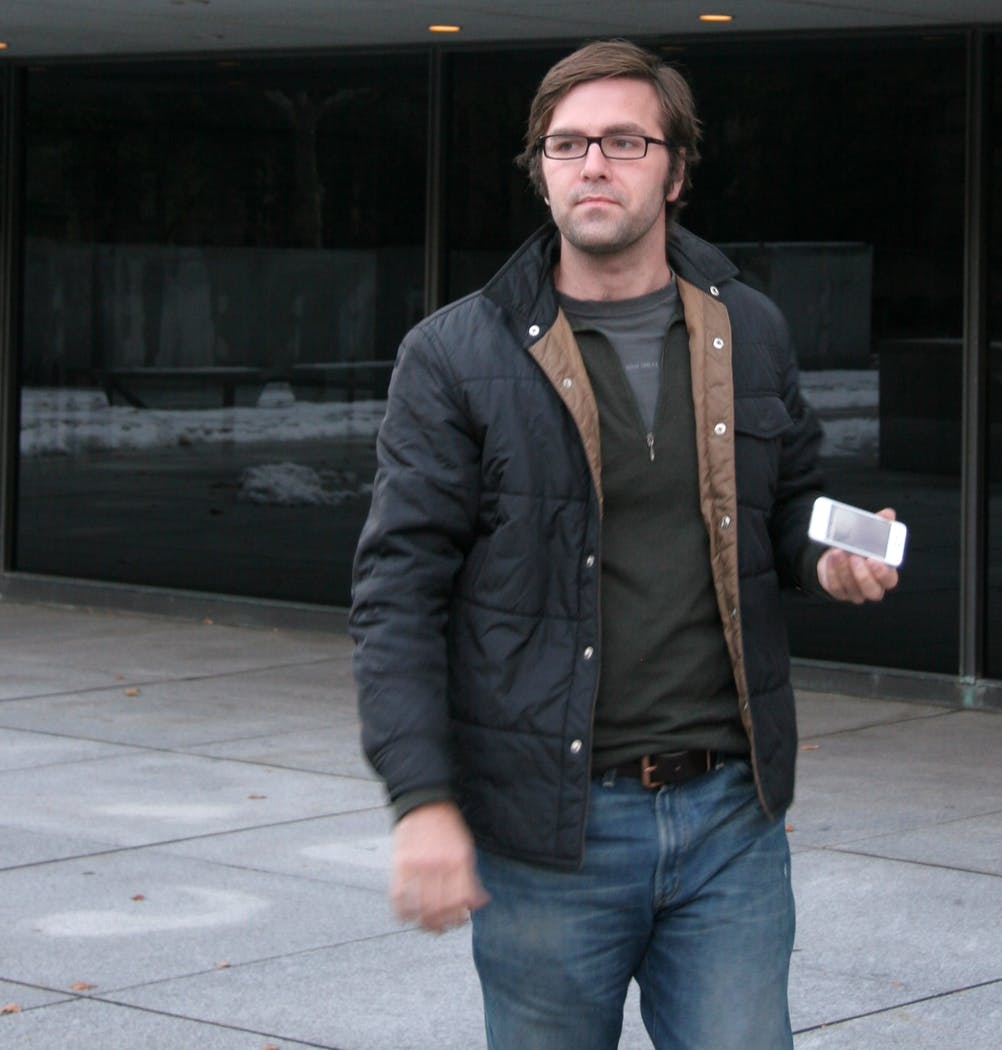 Projectionist was a polished version of anarchaia. Molina (pictured at right) handled the backend programming while Stephenson designed the user interface.

The result was colorful, stripped of columns, and meticulously organized. Pull quotes were now big and bold while chat logs were set off on a paisley blue background that resembled college-ruled paper. Projectionist also contained a robust archive system, which used thumbnails to preview each post.

“I always liked Projectionist and thought it was cool the idea caught on,” Neukirchen said “They also bought and donated the anarchaia.org domain to me.”

The next two years saw the rise of Facebook and Twitter, but neither social network really came close to the blogging style pioneered by the tumblelogs. Then in February 2007, Molina received a message from Karp out of nowhere. He was living in New York, had seen Projectionist and used it as inspiration to create a new site he was launching with his friend Marco Arment. It was called Tumblr. 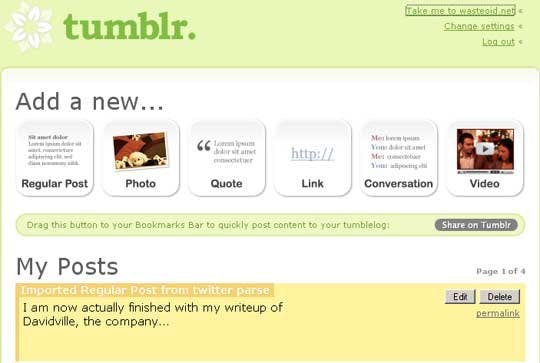 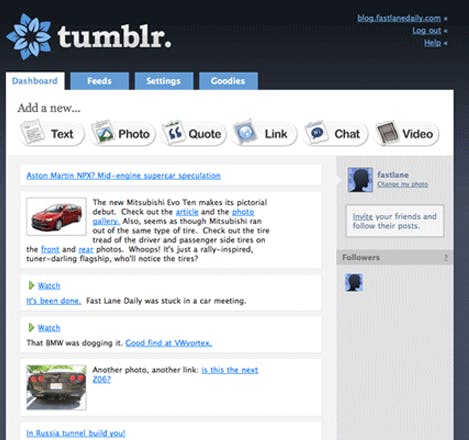 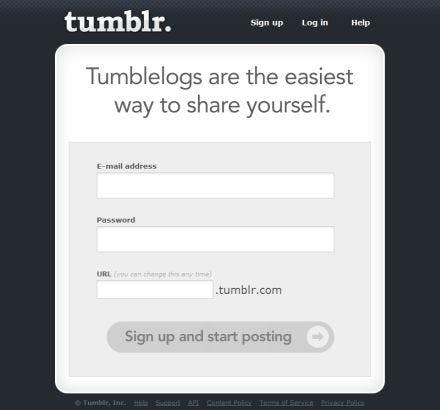 “I think the reason why it ended up inspiring Karp was because it was the most visually and aesthetically pleasing and most in line with his design aesthetics,” Molina added. “It was cool. It’s obviously flattering anytime someone says, ‘I thought of this thing, and you inspired me to do x, y, z.’

“Personally, the gratification I feel is from the work that I put in to curating the content and the way that I presented it and the sequence of posts.”

Tumblr took the best of what Projectionist and anarchaia had to offer and combined it in one platform: anarchaia’s simplicity met Projectionist’s design appeal. 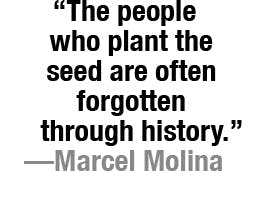 But what Tumblr did most importantly was bring the tumblelog to the masses. Karp, who at the time was sharing an office space on New York’s Park Avenue provided by studio owner Fred Seibert, allowed users to register their own Tumblr URL, customize their blog, and easily share videos, text, and GIFs. Tumblr marketed itself as a home for artists and paid homage to Projectionist on its FAQ page.

Over the next year, Molina exchanged a handful of emails and phone calls with Karp to discuss Projectionist and Tumblr. But with time, the two drifted apart as Tumblr ascended to the national spotlight, raising more than $4.5 million in venture capital and registering more than 50,000 blogs, according to an early profile by the Chicago Tribune. Soon, Projectionist disappeared from Tumblr’s FAQ page.

“There was a part of me that was like, that’s too bad,” Molina said. “It was nice to be acknowledged. But I think at a certain point, he had investments and he had lots of traction and a lot of users and the origin story kind of, in that context, became irrelevant.

While Tumblr has helped bring people from around the world together, the same cannot be said about the three most important people in its creation.

To date, Karp and Molina haven’t spoken in about five years. In 2009, Molina was hired as Twitter’s 20th engineer and continues to work there. Neukirchen still lives in Germany, where he runs Trivium, a weekly blog. Meanwhile, the Yahoo acquisition will reportedly net Karp $250 million.

The interviews with Molina and Neukirchen for this story were conducted over the past year, well before the Yahoo deal surfaced. I had asked both men if they felt any sort of resentment toward Karp for using their creations to build his blogging empire, and they’d said no. When I circled back after Yahoo’s deal, Neukirchen declined to comment, but Molina’s answer was the same: No.

“The people who plant the seed are often forgotten through history,” Molina said. “Even though one could arguably associate substantial or equal credit to them. I’m not saying that’s what I want. I just think it’s interesting how the last one wins.”

Correction: The Web-programming site that gave rise to the term “tumblelogs” was redhanded.hobix.com, not redhanded.com, as previously reported, and IRC actually stands for Internet Relay Chat. We regret the errors.