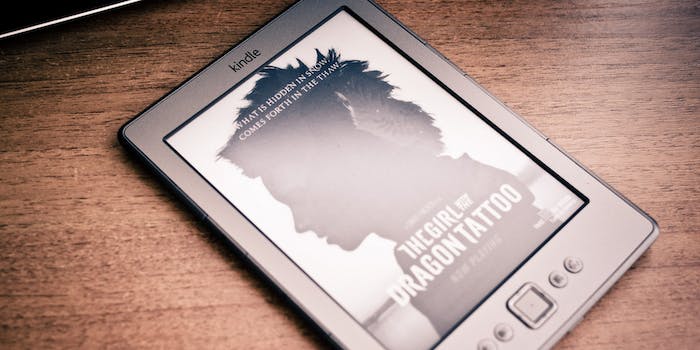 Better for Amazon is rarely better for the publishing industry.

Eager J.K. Rowling fans, don’t expect to pre-order your copy of her next Cormoran Strike novel any time soon—at least not from Amazon.

The Silkworm, the second novel from her mystery nom de plume Robert Galbraith, isn’t out until June, but Amazon’s pre-order service for it is currently unavailable, all because Amazon appears to be trying its best to blatantly strongarm Rowling’s publisher, Hachette Book Group, into complying with its contractual demands.

Another title, The Everything Store: Jeff Bezos and the Age of Amazon, is a detailed and eye-opening account of Amazon’s ruthless business practices and the effect they have on the day-to-day culture of the company. It is not, however, currently available on Amazon in paperback.

Hachette is a major publisher whose authors range from J.D. Salinger to J.K. Rowling and James Patterson. Earlier this month, Hachette accused Amazon of delaying shipments of books and claiming that Hachette titles were “out of stock” despite having plenty of the books in their warehouses. On its website and in a statement given to the New York Times, Hachette reiterated that its books were readily available:

“We are satisfying all Amazon’s orders promptly, and notifying them constantly of forthcoming publicity events and of out-of-stock situations on their website. Amazon is holding minimal stock and restocking some of HBG’s books slowly, causing “available 2-4 weeks” messages, for reasons of their own. . . .

HBG’s titles are widely and immediately available on barnesandnoble.com, powells.com, booksamillion.com, and in thousands of great chain and independent bookstores across the country.”

The Times listed the reason for the dispute as Amazon seeking “better terms,” but “better” for Amazon is rarely better for the publishing industry. During Amazon’s 17-year history, it has grown notorious for bullying publishers into capitulating to its industry-squeezing marketing tactics, including but not limited to: demanding price cuts and higher percentages, delayed bill payment, refusal to disclose publisher sales to the publishers, and removing titles from distribution unless the publisher acquiesced to Amazon in contract disputes.

But the highest stakes for Amazon’s ongoing sparring with the industry came in 2013, when Amazon won a major antitrust lawsuit against Apple and the “Big Six” publishers for monopolistic practices. The companies had banded together in 2007 to set an industry-wide illegal price-fix for the cost of e-books in order to keep Amazon from lowering its prices to the point where no other booksellers could compete.

Proponents of Amazon’s lower pricing strategies argue that Amazon is the underdog in the publishing monopoly, not the other way around. But the fact remains that Amazon is a company that singlehandedly controls 30% of the market share of the entire publishing industry. And unlike its competitors, it has a publishing arm, a distribution arm, and a retail arm. Although the price-fixing that the Big Six and Apple were engaged in was blatantly illegal, the maneuver was a unilateral way of competing as a group against Amazon’s predatory pricing—that is, its ability to leverage its other retail holdings to offer rock-bottom pricing for its books, effectively decimating the landscape of other booksellers.

Amazon’s victory over Apple and the Big Six was a devastating blow to the publishing industry. In its appeal, Apple called the decision “a radical departure” from existing antitrust laws, which would typically have ruled in favor of smaller companies attempting to compete against a much larger company. The verdict was so devastating to the other participants in the scheme that earlier this year two of the biggest publishers in the world, Random House and Penguin, merged, bringing the Big Six down to the Big Five.

Amazon immediately responded to the verdict by raising its prices, a sign that its longterm strategy of killing off all its competitors through discounts and then gradually raising prices was starting to unfold.

Now, the seeds of that lawsuit are bearing fruit in the contract negotiations with Hachette, as Amazon seeks to recoup some of the control over its distribution that it lost during the years of industry-regulated e-book pricing. Part of the reason Amazon is bringing such pressure to bear on Hachette now is that other publishers will follow Hachette’s example, and the results will dictate how Amazon deals with the publishing industry as a whole now that the Department of Justice has essentially given it back its full negotiating power.

Initially, Amazon used multiple tactics against Hachette: delayed titles as well as weighted and unfair book recommendations for titles other than Hachette’s, along with a refusal to issue its typical price discounts for Hachette books in order to discourage buyers from selecting those titles. All of this naturally upset Hachette’s authors.

But this week, Amazon seems to have accelerated its aggressive stance against Hachette in response to the publisher’s continual reluctance to comply with its contractual demands. Not only has it removed the paperback edition of The Everything Store from its store, but pre-orders of major upcoming Hachette titles like The Silkworm and James Patterson’s Invisible are also unavailable.

None of this is anything new to publishers. In 2010, in a similar contract dispute with Macmillan, Amazon simply yanked all of the publisher’s books from direct distribution on its website until Macmillan gave in.

In February, in a New Yorker piece originally titled “Is Amazon bad for books?,” a small press publisher, Melville House co-owner Dennis Johnson, described how Amazon had bullied him into signing up for its paid distribution service despite refusing to relinquish any information to him about his actual on-site sales.

Johnson described how, after his initial refusal to play on their terms, Amazon representatives approached him at Book Expo and advised him to “get with the program.” He also described the way Amazon unsummarily pulled the “Buy” buttons from Melville House titles after he publicly criticized the company.

At the time, the New Yorker noted that Johnson “remains one of the few people in publishing willing to criticize Amazon on the record.”

But it seems as though the more Amazon flexes its corporate muscle against the publishing industry, the more members of the community are willing to speak out.

@JoshHarkinson The power disparity in this relationship (Amazon & publishers/booksellers) is already vast.

Increasingly       , the rhetoric about Amazon’s bullying tactics is that the company is violating the same antitrust laws that it used to spear Apple and the Big Five on the Department of Justice’s hook. “Monopoly achieved,” Johnson wrote after the verdict.

But with the U.S. government failing to scrutinize Amazon’s own business practices, as other governments have, it’s unlikely that anything will be done to curb Amazon’s power over the book economy—or to keep it from expanding the ruthless business practices it’s already using on small retailers in the non-book parts of its store.

It might be a good moment to revisit your local independent bookseller.