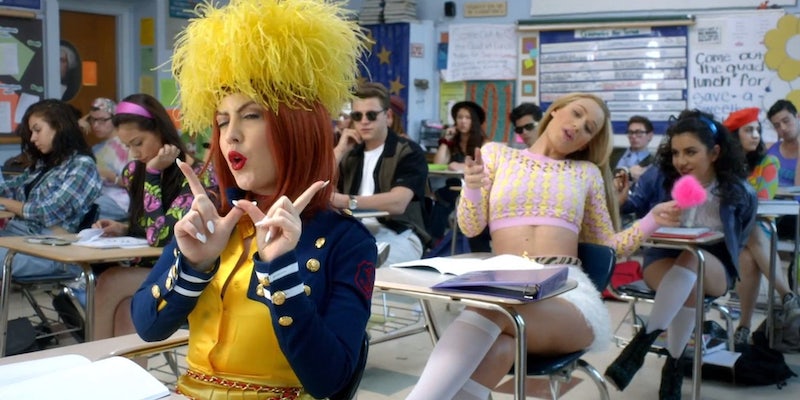 Daring to talk about Iggy Azalea’s racism and cultural appropriation doesn’t make me a racist.

But judging from the tens of thousands of Web comments, tweets and Facebook posts about the piece, “How to talk to white people about Iggy Azalea,” those of us who dare criticize appropriation in hip-hop are part of the problem for “making this about race” and halting society from true progress on racial equity. Nothing could be further from the truth.

It’s about time we unpack all of the clueless vitriol that often comes from white people when we dare to talk about race.

Unfortunately, this episode reinforces a dismal reality in our racial climate: We still haven’t arrived to a point where we can have an open, honest and productive conversation about racism. And, generally speaking, it’s really not anyone’s fault.

Unless you’ve gone to a university or a high school where the issue of privilege—racial and otherwise—has been the subject of a school workshop or a classroom discussion, reading articles about it on the Internet may very well be the first time you encounter the subject matter. And no one’s faulting you for that, because there’s even something to be said about the educational privilege that corresponds with having opportunities to access intellectually rigorous academic settings.

But now that we have the Internet, we have a community-sourced space to have these discussions organically. Because of the immense amount of information available, not just those long lists of cat GIFs, there’s not too much time left for excusing people who aren’t using it as a resource to learn about racial prejudice and white privilege.

It seems as though, when the conversation isn’t as clear cut, such as when whites use the n-word or refuse services based on skin color, just bringing up racism puts many on the defensive or prompts the angered denial of its existence. That’s the reaction many black and people of color are absolutely tired of receiving from so many people who have racial privilege, all of whom will never have any tangible idea of what it’s like to experience the daily social and institutional indignities of being non-white in America.

Many people of color want the space to discuss these issues within a culture where white voices are hyper-amplified––to have their voices heard and respected, even if the emotions come from a place of pain.

As people who benefit from racial privilege, whites can support the leadership of people of color by first challenging these deeply-ingrained myths about racism before entering into a conversation about it, especially with people of color:

1) “You’re racist for making this an issue of race.”

More often than not, when a person of color brings up racism, chances are there’s something problematic happening. It’d be naive to assume that people of color simply exist as opportunists who pounce on any single chance to make a big deal about racism. If you’re tired of hearing about racism, how tired do you think people of color are from having to live surrounded by racism in the first place?

While this may sound revolutionary, so-called color-blindness is actually part of the problem. Not “seeing race” is simply a lazy coded phrase for deliberately ignoring the lingering elements of racism that actually need to be fixed and reinforces the privilege of being able to bypass the negative effects of racism in the first place. As the saying goes, “You can’t erase what you cannot face.”

3) “Talking about issues in terms of ‘white people’ and ‘white privilege’ is reverse racism.”

About that reverse racism thing… it doesn’t exist. It’s no secret that it is humanly possible for a person of color to be prejudiced against whites. Sometimes, it’s an attitude that develops over time because their experience with racism has drawn them to the conclusion that no “good” white people exist in the world. And although there’s a lot of healing that needs to happen in that much more seldom instance of prejudice, the attitude itself doesn’t come with an entire system of benefits and institutional power that being white affords in America. That’s the difference between racism and prejudice, because racism at its root is about supremacy.

4) “You [person of color] clearly don’t know what racism is. According to Webster’s Dictionary…”

Don’t do it. Step away from this infantilizing situation to avoid being a white person dictating how racism works to a person of color, despite their actual lived experiences with it. As for how Webster’s and other dictionaries defines the issue? The oversimplification is a topic that merits an entire thesis.

5) “You [person of color] said something about white people doing racist things, so I demand you explain this to me right now.”

People of color are not on-demand racial justice educators, especially if they have no relationship or affinity with someone seeking the knowledge. In the age of the Internet, if you don’t know someone from a particular community you can speak with, you can likely find those voices on blogs, on Twitter, or even in columns and news articles, talking about the very things you’re seeking to understand. Instead of taxing the already tapped reserves of people of color when dealing with racism, try self-educating before knocking on someone’s door.

6) “But my [person of color] friend said it was OK if I did it [racially problematic thing].”

Still, it’s not the best idea to apply that relational dynamic with one friend to an entire group of people, many of whom have a different relationship with certain words, phrases or actions. Would you touch the hair of a black female stranger just because your black female friend allows you to touch hers?

7) “Stop attacking me for having privileges just because I’m white. It’s racist and hurtful.”

When people critique racism and white privilege in America, they’re speaking generally about a system and not the individual. Unless, that is, an individual instance merits the person being held accountable for their actions (i.e. Donald Sterling, Paula Deen, Iggy Azalea).

8) “I’m sick of pretending that [people of color] need special rights and programs just because they aren’t white. We have problems too, you know.”

To have problems in life is an inherent part of the human condition. But it takes humility, grace and empathy to take the time and space for reflection and self-examination to truly understand that some of us have it much better than others—despite our often half-hearted efforts to ensure equal opportunities for everyone, especially blacks and people of color. Yes, whites can be poor, or female, or LGBT, or immigrants, or have white skin but actually be multi-ethnic, the list goes on. That’s why intersectionality matters, and it includes an interrogation of racial privilege.

First, it’s okay to have emotions and to feel genuinely remorseful when it’s clear that a cruelly reprehensible system has been perpetuated in a word or an action. Emotional policing isn’t cool, and people of color know it all too well. However, more often than not, when the tears flow, they correlate with an outright rejection of the idea that whiteness in America is privileged and normalized in virtually every social and institutional structure. In this instance, instead of centering the many, intensely hurtful experiences of people of color, the person has derailed the conversation and made it completely about them.

It not only shifts accountability in a way that’s been historically dangerous, it also reinforces the very privilege being interrogated: Because these white tears and white feelings are often prioritized above the lived struggles of non-white people.