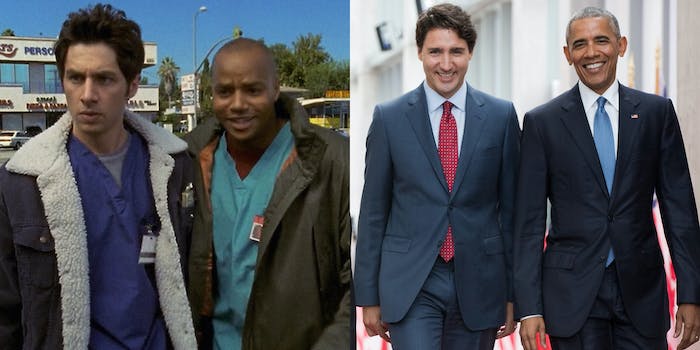 They look so much more presidential now!

The internet loves at least four things in this world: nostalgia, TV reunions, Obama memes, and Justin Trudeau. Scrubs star Zach Braff cleverly combined all four in an Instagram post that’s a troll for the ages.

For all the folks who can’t help but click on “where are they now?” stories, Braff reposted this hilarious spoof on his Instagram page Friday afternoon.

Of course, that’s not Donald “Chocolate Bear” Faison and Zach Braff after almost a decade and a few gray hairs. That’s Canadian Prime Minister Justin Trudeau glancing at former President Barack Obama. The look in Trudeau’s eye says he could be thinking about playing EAGLE! together though.

Upset that it wasn’t Faison and Braff after all? Don’t worry; they’re still hanging out together, and they haven’t changed a bit.

Reunited and it feels so good.