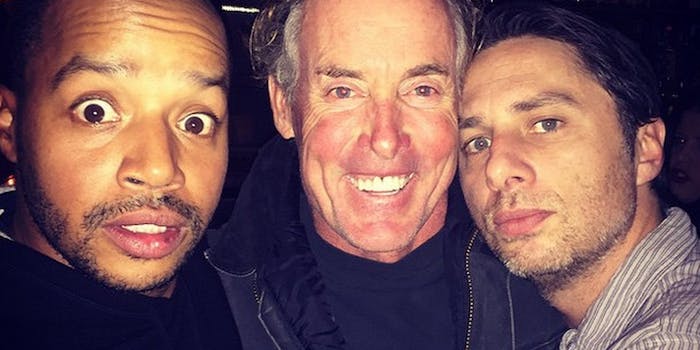 Plus, a special playlist of indie rock because that's what Braff would do.

Reunited and it feels so good.

But it’s also a stark reminder that it is almost 2015. This decade is half over and the teens (is this what we’re going with? Has anyone called this decade anything at this point in human history?) are forging an identity loosely rooted in “whoa it’s 2014 and we have cyborgs” moments of self-actualization. All the while, however, 2014 still feels like a mild-mannered, almost flavorless extension: Barack Obama is still the president, and this age will be combed historically as “the early 21st Century.”

That’s why the Braff-posted selfie was so jarring. Scrubs feels rooted in the early 2000s in terms of cultural iconography and because reruns were a go-to for many bored watchers of basic cable during the aughts: Hey WGN has Scrubs reruns hon, let’s watch an hour of this in our bedroom because the cable allows us to just patch in another big glass TV in here as opposed to forking over extra for an additional digital receiver.

Picture 2005 and a whole other world instantly appears. Look, there’s Common as a respectable rapper, bands investing in MySpace and not YouTube, Facebook as an elite community of academic minds, those leather bands that men wore in place of wristwatches. We’ve almost evolved to a point where we can begin missing those years.

This means that sentimentality for the recent past is right on schedule. The selfie is proof positive.

Steven Hyden wrote a whole essay about blog rock this spring and my immediate reaction was to give in to that tugging romanticism and make a mix of trendy-at-the-time indie rock that dominated college radio five-to-10 years ago. In honor of the Braff selfie and what Braff almost surely does whenever he gets melancholy about time, here is that blog rock-inspired playlist.

Sorry in advance for not bundling these files and uploading them to zSHARE.