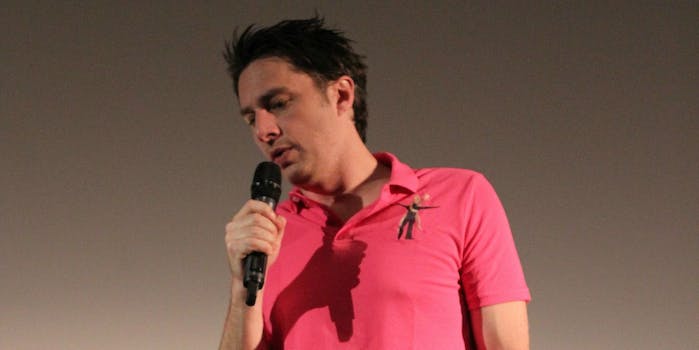 J.D. and Turk will serve up a hot slice to any gay couple in Indiana.

Last week, the fight for civil rights in Indiana took a nasty turn as the owner of Memories Pizza sullied the good name of the slice by speaking out against LGBT rights. “If a gay couple came in and wanted us to provide pizzas for their wedding, we would have to say no,” owner Crystal O’Connor told local reporters.

That now-infamous interview not only left Memories Pizza with a Yelp page full of seething reviews, but also left the LGBT couples of Walkerton, Ind., without catering for their hungry guests. Thankfully, for all the engaged gays out there who are craving a hot slice on their special day, Zach Braff has stepped in.

On Friday, the actor took to Twitter to volunteer himself and Scrubs co-star Donald Faison as pizza chefs for any Indiana gays who might be in need of a few pies on their wedding day. “If you really and truly want pizza for your gay wedding in Indiana… We will make it for you,” Braff wrote, posting a photo of him and Faison in a boat.

If you really and truly want pizza for your gay wedding in Indiana… We will make it for you. @donald_faison pic.twitter.com/y91qIkVoyt

It’s unclear if anyone’s taken the Scrubs star up on his offer, but we hope someone does soon. The only thing better than getting pizza delivered by J.D. and Turk after you’ve tied the knot is them delivering it in a boat. I’m sure if you’re in need of some entertainment Ted and his acapella group would be happy to step in as well.