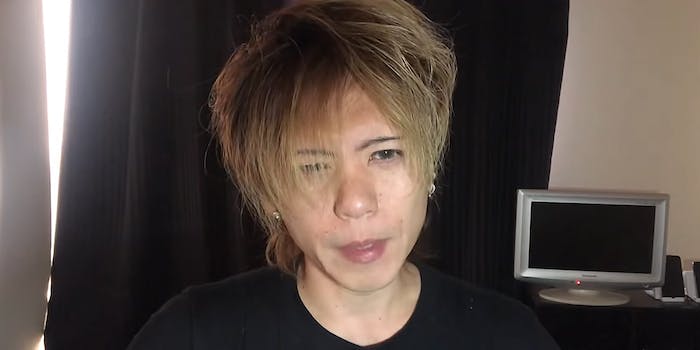 He tied her up. Then, he punched and kicked her in the face.

A YouTuber in Japan who tied up his wife with adhesive tape and then punched and kicked her in the face after he discovered she was leaving critical comments on his videos was sentenced to two years in prison last week.

According to the Japan Times, Ryoma Katori, 44, was found guilty of assaulting his wife, and the judge who sentenced him said Katori “should be strongly criticized as he committed the crime after losing his temper.”

The YouTuber—who visited and posted about sightseeing spots and restaurants in his hometown of Oita, Japan— reportedly had been flummoxed for months at one viewer who repeatedly insulted him, calling him “stupid” and “bald” on his videos. In March, he discovered it was his wife after she apparently had asked a friend to post similarly derogatory comments on her husband’s channel.

According to the Times, he then bound her with adhesive tape and assaulted her in their apartment. SoraNews24 reported that injuries were visible on her for a month after her husband attacked her.

During the May trial, he admitted to the attack, and prosecutors requested a three-year prison stay.

Katori isn’t the only known YouTuber sentenced to prison recently. Earlier this month, Spanish YouTuber ReSet was sentenced to 15 months for feeding a homeless man toothpaste-filled cookies and was banned from making YouTube videos for the next five years. In the case of Reset, though, he probably will avoid imprisonment, because first-time offenders who are sentenced to less than two years of prison time usually receive suspended sentences.

That luxury won’t be afforded to Katori, though.