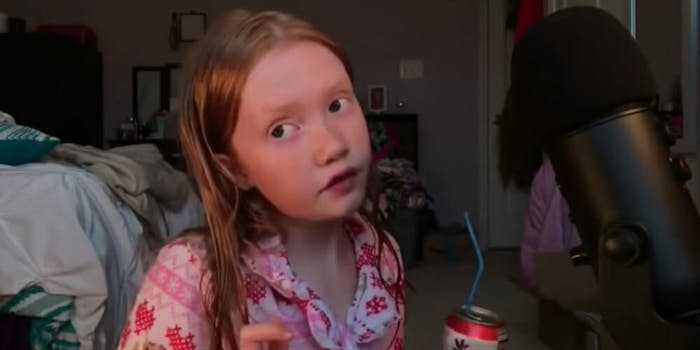 The 13-year-old is quitting YouTube after it removed several of her videos in an effort to combat its growing pedophilia problem.

Popular ASMR YouTuber Makenna Kelly, aka Life with MaK, is quitting YouTube after the platform removed several of her videos in an effort to combat its growing pedophilia problem. She claims the platform is discriminating against her, enforcing its rules unevenly, and ignoring her complaints of an adult YouTuber who has “sexually cyberbullied” her.

The 13-year-old has amassed over 1.5 million subscribers who tune in to watch her perform autonomous sensory meridian response (ASMR) by eating different foods, whispering, and tapping or scratching things–all into a microphone.

YouTube has been facing a growing pedophilia crisis on the platform this past year and mounting pressure to combat it. The company told the Daily Dot in February that it terminates thousands of underage accounts each week to help combat the problem.

Kelly said that, within the past three months, YouTube removed 12 of her videos. Some of the videos include her eating “sticky” food, which were removed because they could be perceived as “sexual content.”

She claims she wouldn’t have a problem with YouTube’s policies if they were to be enforced evenly and that she is being singled out.

“I love doing ASMR and I have no issues with following the rules of YouTube, but I do have a problem with them treating me different than other minors,” Kelly said. “I think most people could name several teenagers on YouTube that do and say extremely questionable things on a regular basis, yet I’m over here feeling like a bad person for eating honeycomb.”

The internet phenomenon is supposed to help people relax or fall asleep, but for some, it can be a sensual experience. This is why minors performing ASMR is a gray area for YouTube.

“We’ve been working with experts to update our enforcement guidelines for reviewers to remove ASMR videos featuring minors engaged in more intimate or inappropriate acts. We are working alongside experts to make sure we are protecting young creators while also allowing ASMR content that connects creators and viewers in positive ways,” Claire Lilley, YouTube’s child safety policy manager, told Wired in February.

Kelly also claims that an adult YouTuber “sexually cyberbullied” her on the platform–and when she brought it up to the company, she was ignored.

“It’s ironic that (YouTube keeps) saying they are ‘trying to protect me’ yet when this issue was brought up to three of their employees, they completely ignored it,” Kelly said. “They did not care one bit about a grown man calling me offensive and derogatory names and making lewd sexual comments about me on their platform.”

She publicly called out YouTube about its inaction when dealing with the alleged harassment.

“Dear @YouTube: Your blatant discrimination will not stop me. I will not let you use me as a target for your platform’s shortcomings. I am not sorry for being a confident young woman who speaks her mind. You condoned a grown man to sexually bully me and it’s time to own up to it,” she wrote in a now-deleted tweet.

On June 3, a report came out claiming YouTube’s algorithm facilitates pedophiles by recommending them home videos of young children. The report caused the company to alter its YouTube policies, banning 13-year-olds and younger, from livestreaming without an adult present.

In the past, YouTube was also met with news that pedophiles were sharing time stamps to sections of video that showed nudity, which led it to disable comments on videos of children. The platform then reduced recommendations of videos featuring minors in “risky situations.”

Critics allege that a more solid fix would be to do away with YouTube’s recommendation system of children altogether.

In February, a YouTuber laid out his discovery of a “softcore pedophile ring” on the platform. A spokesperson told the Daily Dot at the time that it hired child safety experts who are dedicated to catching those who wish to harm children.

Kelly said she is still researching the next best platform to switch to.

“WTF do I do now that I’ve decided to leave YouTube? Also me: GOOGLE- ‘What is Twitch? And do I have to play video games to join?” Kelly wrote in a now-deleted tweet.

This article has been updated to reflect that Kelly’s tweets have since been deleted.