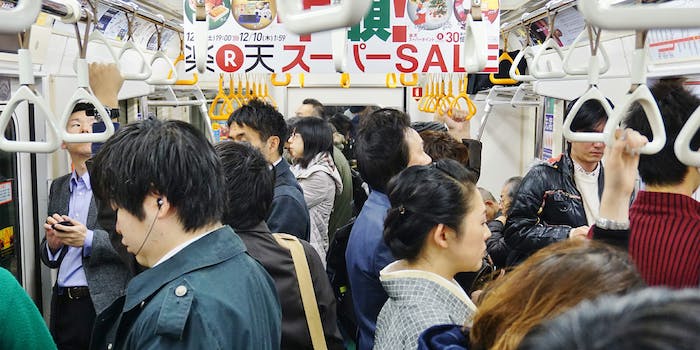 The number of downloads of Digi Police is increasing by 10K per month.

People in Japan are (digitally) confronting their harassers with an app that’s so popular, it’s been downloaded almost 250,000 times, according to the Guardian.

The Digi Police app was launched a few years ago, at first as a resource to help elderly members in the community avoid scams and to offer parents safety information. But, in recent months, it has become something that women and nonbinary folk have put to practical use: If groped or molested on the subway, they can push the “repel button” on the app that screams, “Stop it!” It can also flash the message—in red nonetheless, so there’s no avoiding it—“There is a molester. Please help,” which the user can show to others around them.

The app allows women and nonbinary people to out their harassers, without having to physically confront them. According to Tokyo police, the app is so popular, the number of downloads is increasing by 10,000 each month. That is a lot of fed-up people ready to shame the men who harass them on their daily commute.

Sexual harassment and groping are so prevalent in Tokyo that more than a decade ago, the government introduced women’s-only carriages to curb the problem. In 2017, about 1,800 out of 2,620 sexual harassment cases reported involved groping, most of which took place in the public transportation system.