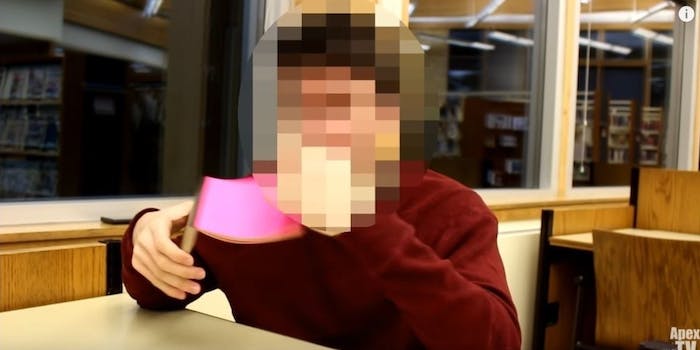 The most famous time traveler on YouTube is back with another video on the ApexTV channel, and he’s here to explain why there are so many time travelers on YouTube.

Previously, Noah the supposed time traveler told the millions of people who have clicked on his videos what a map of the U.S. looks like in 2030, predicted what will happen to Asia in the next decade, and showed off “raw footage” from Las Vegas in the next century. (These videos are low-rent and easily laughed off as CGI gags, but that hasn’t stopped Noah from snowballing millions of viewers.)

In his latest video, Noah said the reason so many supposed time travelers are displaying proof of their journey to 16th-century China and showing photos from the future is simple.

It’s because the government (the U.S. government, we assume) treats time travelers poorly, so they get on YouTube to show that people from the future actually exist in the present. In essence, the time travelers are pissed and they want the world to know about it.

“The government doesn’t like time travelers,” Noah said. “They have us work for them. They don’t really treat us well. We’re treated worse than fast food workers. We’re treated worse than people who work in sweatshops in third-world countries. Time travelers want to go out to expose the government because they’re so angry about being treated this way.”

In the video, Noah also explained the mechanics it could take to get him to the present, which is really his past. He talked about time travel through black holes and space travel—theories that are legitimate, according to scientists—and he used a pencil and a piece of paper to show how a time traveler could break through the space-time continuum.

One commenter, though, clearly doesn’t believe Noah’s explanations. As the Everything Explained by Ethan Kahn channel wrote, “Time travel is real, but Noah’s story is a fake. I’m surprised people still believe him after he showed that animated ‘video of the future.’ Also, these are very amateurish descriptions of time travel that you can learn about anywhere online or by watching Science Channel shows. The last method, where he explained the different dimensions, wasn’t even describing other dimensions. Other dimensions do not mean other universes. You enter other universes by traveling through other dimensions. That’s because each higher dimension includes lower-dimensional spaces (universes) embedded within it. That’s how Cartesian dimensions work, so don’t even argue with me unless you’re a math professor.”

In his next video, Noah promised to show what a time machine looks like.

And surely, a large swath of the people who watch probably won’t believe anything he says.