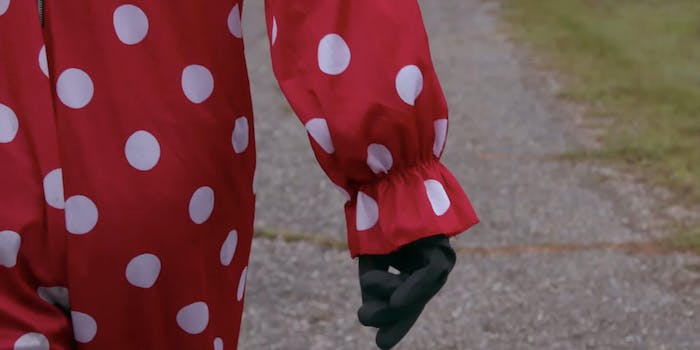 ‘Wrinkles the Clown’ is a compelling documentary with an infuriating twist

'Wrinkles the Clown' takes viewers on a clown-filled roller coaster ride that's as funny as it is convoluted.

Remember the great clown epidemic of 2016?

In case you weren’t plugged into the news cycle (or in case you’ve been preoccupied with more pressing issues since then), here’s a quick refresher: The clown panic of 2016 saw a delightful slew of clown sightings. Before that, there was Wrinkles, a terrifying clown who supposedly offered his services to frustrated parents wanting to scare their kids into behaving. Wrinkles the Clown, a documentary directed by Michael Beach Nichols, explores both the mythology of Wrinkles as well as the man behind the mask.

With over 1,400 voicemails left for Wrinkles, a slew of ominous video and photo sightings of him, larger-than-life legends spread online, and the ethical ramifications of parents using fear to manipulate their children, Wrinkles the Clown has quite a lot of ground to cover. While the end product does touch on all of these ideas, Nichols’ efforts to balance every aspect of this bizarre, costumed phenomenon only somewhat pays off.

On the surface, Wrinkles the Clown is downright entertaining. Nichols painstakingly sifted through all the voicemails on Wrinkles’ phone and provided audiences with the most attention-grabbing ones: shocking death threats, children crying as their parents ask Wrinkles to eat them, the works. Several of his interview subjects are indignant kids (often accompanied by unapologetic parents) with their own vocal and colorful opinions of Wrinkles. Wrinkles himself—whose face remains hidden throughout the first half of the documentary—is a delightfully wonky character whose bluntness and eccentricities are immediately endearing.

Unfortunately, the latter half Wrinkles the Clown unveils the Wrinkles we’ve come to know and love as… an actor merely pretending to be Wrinkles for the sake of the documentary. The first roughly 45 minutes of learning who Wrinkles is and what makes him tick turn out to be for naught as Nichols pivots to the real Wrinkles, a shadowy figure with a distorted voice who begins telling a completely different tale.

If you think this all sounds confusing, that’s because it is.

Nichols made this bold—and unnecessary—artistic choice because he wanted to explore the idea of myths coming to life. But for a cinematic genre that’s supposed to be clear and educational, this approach is frustrating, befuddling, and manipulative. Wrinkles the Clown lies to the audience for dramatic effect, and that suspicion hangs over the remainder of the film.

Wrinkles the Clown is full of golden storytelling nuggets that are engaging and, at times, thoughtful. Viewers are privy to exclusive behind-the-scenes footage of some of Wrinkles’ most infamous viral videos, and Nichols takes time to explore folklorists’ and psychologists’ views of this “psychological warfare” against children. However, the gimmicky dramatization of Wrinkles muddles the diverse array of perspectives and story threads. If you want some laughs and a bit of insight into a truly bizarre subchapter of recent history, this documentary is for you. Just be ready to gain that information in an inefficient way.