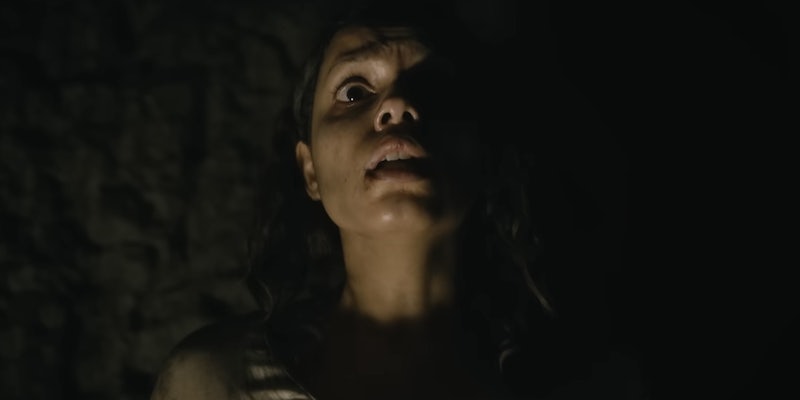 Where to watch ‘Barbarian’—before someone spoils it for you

Don't let the surprises get ruined by jerks. Subscribe to HBO Max now.

If you’re wondering where to watch Barbarian (2022)—and why you should before it gets spoiled for you—we’ve got you covered.

Many horror movies play with everyday experiences, exposing what is frightening about the mundane. For example? Barbarian.

Barbarian, according to the original synopsis, is about a young woman traveling to Detroit for a job interview. She books a rental home (an Airbnb no less). When she arrives at night, she finds that the house has been double booked, and a man is already staying there. What would you do? She decides to stay — and that’s when the terror begins.

The movie, which stars Georgina Chapman and Bill Skarsgård and is written and directed by Zach Cregger, has been playing in theaters, but now it’s out on HBO Max just in time for Halloween. The movie made $42 million at the box office based on a pretty modest $4.5 million budget, and word of mouth has largely been responsible for its success. It currently has a 92% approval rating on Rotten Tomatoes.

Cregger, who has a comedy background, told Bloody Disgusting that humor helped him write a horror movie: “It’s all about subverting expectations. It’s all about being a step ahead of the audience, zigging when they expect you to zag, and timing. It’s just timing and tone,” he said. “That’s the anatomy of a joke; that’s the anatomy of a scare. I do feel like I’ve been working that muscle group out for a long time through comedy.”

Cregger also shared some of the films that inspired Barbarian: “Well, definitely Audition, the Takashi Miike film. The whole flashback sequence is straight up visually from this Austrian film, Angst, which I believe is on Shudder. It’s a brutal movie, but I love the way they follow the main character. I made my DP watch that movie, unfortunately for him. Anything Sam Raimi did, Evil Dead II, is really front and center in this movie. Proudly so, I think he’s a genius. Evil Dead II made such a big impact on me, I couldn’t even begin.”

Why you should watch with no spoilers

According to Chase Hutchinson at Collider, the movie has a “palpable sense of peril.” He also warns viewers to go in cold and watch Barbarian (2022) with as little information as possible, as the film apparently functions more effectively if you really do not know anything about it. It’s more about the experience, he notes, “the actual journey itself.”

With many critics noting the film’s unpredictability as a plus, it’s sure to make an excellent addition to your Halloween lineup this year. Just don’t watch it in an Airbnb. Or do.

HBO Max is where to watch Barbarian (2022), check out pricing options below: