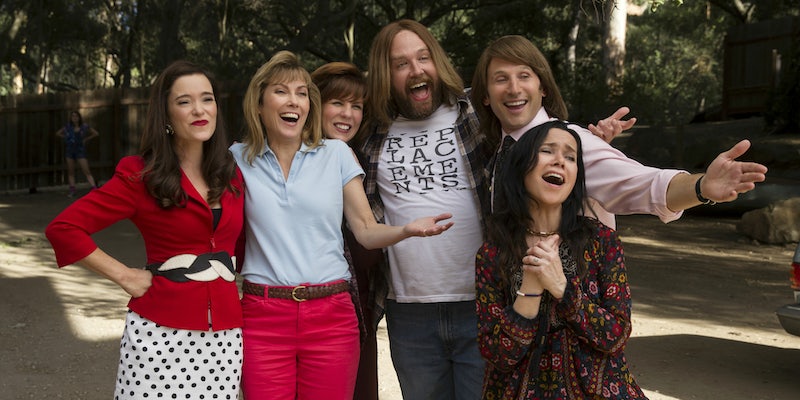 When Wet Hot American Summer debuted in 2001, a reunion was always part of the deal. Sixteen years later, we finally have Ten Years Later.

That backward math is one of the trademarks of David Wain and Michael Showalter’s film and its 2015 Netflix prequel, First Day of Camp. That series made sense of some of the film’s loose ends and in-jokes and also built on the existing narrative. So what is the purpose of Wet Hot American Summer:Ten Years Later? Well, as proposed by Bradley Cooper’s Ben in the original film, to see what kind of people they’ve blossomed into.

Adam Scott is now playing Ben, making it a Parks and Recreation reunion inside a WHAS reunion. It’s a great hook for clicky headlines, but it doesn’t really add much to the narrative. The eight-episode series starts with a flashback to the original film, and the gang’s iconic sign-off in 1981. It then fast forwards to August 1991, as Jesus Jones’ “Right Here Right Now” soundtracks a descent into NYC and a flood of ‘90s references. We get reacquainted with the Camp Firewood gang and their lives, but after finishing the series, I wished Ten Years Later had stayed in New York City and followed their lives there.

But they have to go back to Camp Firewood, and the reunion collects McKinley (Michael Ian Black), Coop (Showalter), Andy (Paul Rudd), Lindsay (Elizabeth Banks), Katie (Marguerite Moreau), Susie (Amy Poehler), and more of the original cast, plus new characters Claire and Mark, two camp counselors who were always just out of frame in the original film. It’s another one of the series’ absurdities, but the focus on certain relationships, like Coop and Katie’s frustrating will-they-won’t-they, gets tiresome after a while.

One of the drawbacks of Ten Years Later is that it isolates so many of the relationships that it feels like the cast was never there on the same day, à la Arrested Development’s fractured last season. It also doesn’t really give any of them rich inner lives. These people are still so attached to their lives 10 years ago, but why? The series tries to explain the “spirit” of Camp Firewood has something to do with it, but it never really lands.

Ten Years Later opens up more with non-camp characters, like Alyssa Milano’s Renata. She’s hired by Ben to babysit his and McKinley’s daughter while they’re at the reunion, and the storyline gives a nod to ‘90s thrillers like The Hand That Rocks the Cradle and other “psycho nanny” films. But the dramatic tension also gives insight into the characters in situations outside the camp. Presidents Reagan and Bush Sr. are featured prominently, giving the story a parallel action storyline that has an appropriately absurd outcome. Gene (Christopher Meloni) is also a joy any time he’s on screen, which is unfortunately not enough.

Super fans will still binge away; WHAS has created a world where the rules of comedy are specific to that universe and the formula is somewhat comforting. But Ten Years Later still feels confined by a joke made 16 years ago.