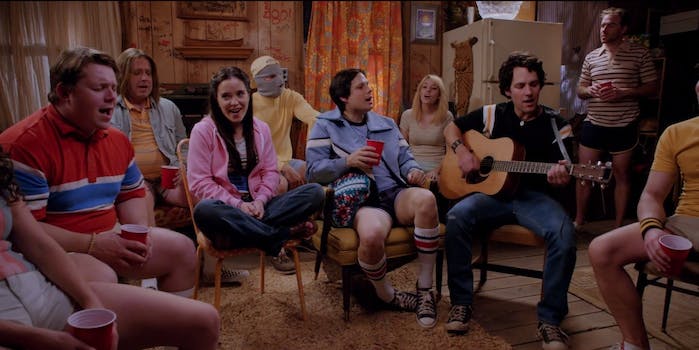 Even Paul McCartney can’t make them wet themselves with ‘Can’t Buy Me Love’ like he used to.

Fourteen years after the release of sex-comedy camp spoof Wet Hot American Summer, the new eight-part Netflix prequel First Day at Camp proves that—just like that greatest summer of your life—even if you are able to put all the same parts in place, sometimes there is no going back.

A lot of people were wrong about the original film. Good people. Like Roger Ebert, whose cringey, dad review proved that there is no better way of undermining your argument that something isn’t funny than by falling embarrassingly at the very same hurdle. And, stupid as that review is, many believed him anyway; people didn’t go to see Wet Hot American Summer.

You might look at the cast of the film now and wonder how any of this could have happened. Amy Poehler. Paul Rudd. Bradley Cooper. Janeane Garofalo. David Hyde Pierce. Elizabeth Banks. Ken Marino. Christopher Meloni. All pulled together by the creators of MTV’s sketch series The State, David Wain and Michael Showalter.

But here’s the thing: Other than Garofalo and Pierce, no one knew who these people were. Sure, Rudd had been that sort of incestuous brother character in Clueless, and Meloni had just started committing and solving sex crimes concurrently in Oz and Special Victims Unit, but these weren’t yet names on which to hang a movie, especially one that was somewhat unorthodox. There was talent, obviously. But the fame was latent.

And really, for those who saw the film early, that was the appeal. You could watch it for the first time and discover these actors who would end up going on to great things. And like anything that you latch on to before the critical mass of popularity turns it stale, it seemed special.

Even for those who ducked in later, when the film’s following had been upgraded to “cult,” there was the thrilling realization that Camp Firewood was some sort of ground zero for a dozen divergent careers that 14 years later would be found in Pawnee, at the Academy Awards, or in a superhero costume.

It’s something that the cast must realize. They wouldn’t be back otherwise, aligning calendars and “making it work” so that they could revisit where it all started. It must have been a sort of reunion for them—an easy sell to Netflix, considering the star-wattage, and a far cry from the struggle to find a distributor for the original film.

And initially it is exciting to see them all back, basking in the central joke of the series (if you thought they looked mature for their roles in the film, well, guess what 14 years did!) with Marino strutting around in ridiculous shorts and Cooper foreshadowing his character’s coming-out. But the further you venture into the series, the more you realize that the wrinkles on Marguerite Moreau’s face aren’t just a cruel jab at your own aging (she was a kid in Mighty Ducks!). Rather they are a reminder that things have moved on.

And this is the problem with First Day at Camp. Whether the cast want to imagine otherwise, things have changed. Everyone is more famous. And this inevitably has had major repercussions for the flow of the series. Characters who were minor in the film (Cooper’s Ben and Banks’ Lindsay, most noticeably) have had their screen-time enhanced, which may be in line with their popularity as actors, but is an artificial inflation of what were one-dimensional characters to begin with.

But the major destroyer of the already precariously placed balance of the ensemble is the overgenerous doling-out of cameos and additional characters. Jon Hamm. Chris Pine. Jason Schwartzman. John Slattery. Jordan Peele. Lake Bell. Michael Cera. “Weird Al” Yankovic. Bruce Greenwood. Kristen Wiig. We get it. You’re more famous now, and so are your friends.

But with a large cast to start with—one in which certain members feel they are deserving of a few more close-ups this time around—the addition of what feels like dozens of extra characters (most of whom need to be killed off) only seems to muddle everything into a confusing mash of non-connected plotlines that barely come together at the series’ dénouement. Wet Hot always came across as a rough-and-ready, barely-hanging-together picture, but there was always a consistent heart that the rest of the universe gravitated toward. In this series, odd streams concerning toxic waste and reclusive rock stars seem entirely unrelated.

And this isn’t a surprise, because much of this series seems to have been shot piecemeal around the availability of the different members of the cast. Cooper and Poehler hardly appear outside of the set for the camp musical Electro City, and Marino disappears for about four episodes mid-season.

To be fair, some fun is had with this (actors of different body shapes portray Cooper’s character’s alter-ego DJ Ski Mask—whose face, as his name suggests, remains covered), but it is a contributing factor to the isolation of certain characters. It is telling that there is never a scene where all the major characters are present. For a site like a summer camp, where there are endless meetings and interest is garnered from the intrigues and relationships between the different campers and counselors, the lack of these sort of foundation scenes makes it difficult to imagine the sort of youthful group dynamic from which the genre’s humor needs to spring.

So what about that, right? Is it funny? Well, yes and no. It is humorous in a sort of Funny-or-Die, Jimmy-Fallon, 10-million-likes, celebrities-lip-syncing kind of way. Because when it comes down to it, that’s what this is. The film felt like it had been made by outsiders, sniping at accepted form, and the humor gave the impression of recklessness. It feels important that the going-to-town sequence—where youthful hijinks rapidly melt into heroin use—would seem out of place here. Whether by time or Netflix’s guidance, things have become more conventional.

This series is not a pathetic homecoming like those bands that go on tour after 15 years and play their most famous album from start to finish. That’s because none of the people here have to be doing this. But on the flip side it means that the Coopers, Rudds and Poehlers can’t be the same risk-taking people they were when they first inhabited these characters. Camp Firewood used to be made up of misfits, and that made sense. But having it made up of the World’s Most Handsome Man, probably the most likeable, and President Leslie Knope just seems to run contrary to everything we have been led to believe. Even Paul McCartney can’t make them wet themselves with “Can’t Buy Me Love” like he used to. There’s no problem with changing; just don’t expect everything to be the same.