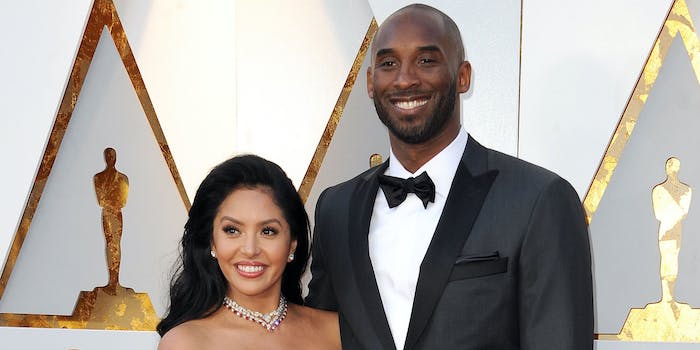 ‘Thank you so much for lifting us up in your prayers.’

Vanessa Bryant has released her first statement since her husband Kobe Bryant, their 13-year-old daughter Gianna, and seven others died in a helicopter crash Sunday.

She put the statement on Instagram, where she shared a photo of herself, Kobe Bryant, and their four daughters; she also changed her profile picture to a photo of Kobe and Gianna Bryant from the 2016 NBA All-Star Game.

Bryant started off by thanking everyone for their prayers and support over the past few days, noting that she and her family are “completely devastated” by the loss of Kobe, Gianna, and the other people who were on the helicopter when it crashed.

“There aren’t enough words to describe our pain right now,” Bryant wrote. “I take comfort in knowing that Kobe and Gigi both knew that they were so deeply loved. We were so incredibly blessed to have them in our lives. I wish they were here with us forever. They were our beautiful blessings taken from us too soon.”

Vanessa and Kobe Bryant married in 2001 and had four daughters together.

“Our love for them is endless — and that’s to say, immeasurable,” she said. “I just wish I could hug them, kiss them and bless them. Have them here with us, forever.”

Bryant also highlighted the MambaOnThree Fund, a newly created fund by the Mamba Sports Foundation, to help provide financial assistance for the families of the seven other people who died Sunday before reiterating her gratitude for the show of support fans have shown her and her family.

“Thank you so much for lifting us up in your prayers, and for loving Kobe, Gigi, Natalia, Bianka, Capri and me,” she added.