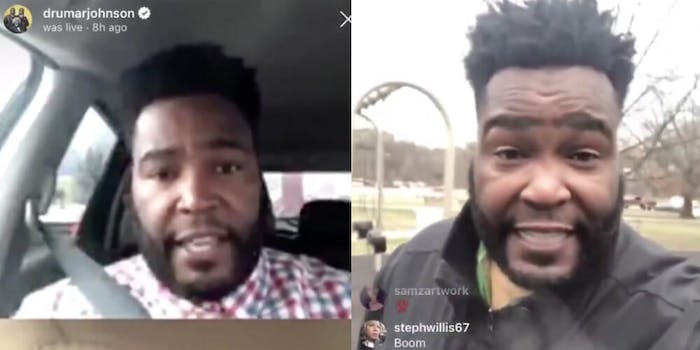 He is claiming someone 'sabotaged the propeller' of Bryant's helicopter.

Dr. Umar Johnson, a psychologist and Pan-African activist, is under fire for proposing a conspiracy theory about the death of Kobe Bryant.

Johnson, a known conspiracy theorist, claimed on Monday that somebody tampered with Bryant’s helicopter, causing it to crash. Furthermore, Johnson says his death came as a result of a legal battle he was invested in with a Hi-Tech Pharmaceuticals, which wanted the legal rights to his nickname “Black Mamba.”

“They did not crash because of the fog, that was an expert pilot,” Johnson said. After repeatedly mentioning Bryant’s pharmaceutical battle. “Kobe was sabotaged. Radar can see through the fog. It wasn’t no wind, the propeller was sabotaged.”

However, it’s worth noting that Hi-Tech’s Black Mamba product is a set of low-grade diet pills, according to the Atlanta Black Star.

“Are they really suggesting that fog killed Brother Kobe & company? Planes & helicopters been flying through fog for decades, not to mention there’s radar on most aircrafts, and they were familiar with the route of travel. If this gets blamed on fog then it was definitely murder”

More recently, Johnson claimed on Instagram Live that he believes the NBA is a suspect in his personal investigation into Bryant’s death. In the video, after his phone fell off the stand, he claimed to be evidence that his conspiracies are true.

“As soon as I mention the NBA in the first suspect of Kobe’s death, my cell phone get blown off the stand,” he said. “That’s not proof. It’s still debatable, but it’s a good piece of evidence.”

Previously, Johnson made waves in a controversial Breakfast Club interview in December 2019, in which he touts conspiracies about Bill Cosby’s accusers and arrest. In the interview, he claimed Cosby was imprisoned for trying to buy NBC and said Meek Mill was only released from prison to ease tensions surrounding another Black man’s arrest.

“They had to free Mill in order to kill Bill,” he said.

However, users on Twitter were quick to dismiss or denounce Johnson’s conspiracy theory, with both anger or comedy.

“The fact that [conspiracy theorists] center the entire conspiracy around Kobe, neglecting [eight] other [people] including his daughter Gigi is devastatingly ignorant,” Twitter user @XGonGiveIt2Yu said. “You mean to tell me Kobe died over a legal battle of the name of a fucking VITAMIN? Fuck Umar Johnson.”

I don't wanna hear shit Umar Johnson has to say about shit. Not even actual shit. If he saw me about to step in dog shit, STILL be the fuck quiet

*Celebrity dies of natural causes at home in bed*

Dr. Umar Johnson: “They put a chemical on his pillow that suffocated him in his sleep, because he was in a legal battle with Hallmark Card Company”

"THEY KILLED KOBE SO THAT THEY CAN CALL US TOBY"- Dr. Umar Johnson pic.twitter.com/Ce6noOQiu2

Now we got Umar Johnson talking about sabotaged propellers
. . .

“I like some of the Umar interviews — what the Fuck does he know about ‘copters” pic.twitter.com/I5CyAE4OQn

The fact that they center the entire conspiracy around Kobe, neglecting 8 other ppl including his daughter Gigi is devastatingly ignorant.

You mean to tell me Kobe died over a legal battle of the name of a fucking VITAMIN?