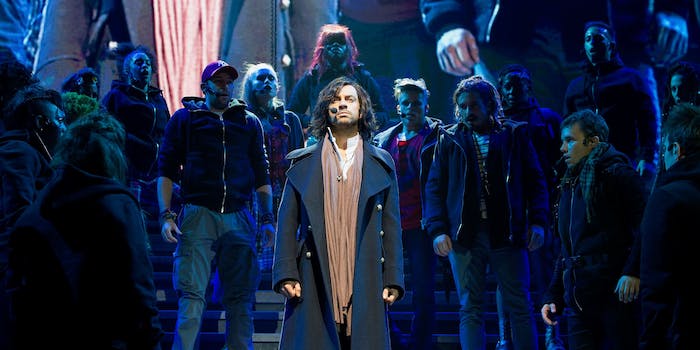 The shows will debut on Fridays and be available for 48 hours.

We don’t know when we’ll be able to see a musical performed live with theaters staying closed due to the coronavirus, but there’s still a way to get our Broadway fix in.

Universal announced Thursday that it’s launching The Show Must Go On, a new YouTube channel where it plans to make several Broadway and West End musical productions available for a limited time. New (relatively speaking) shows will debut every Friday at 2pm ET/11am PT and be available to watch for free on YouTube for 48 hours.

The first two musicals being offered are Andrew Lloyd Webber biblical-inspired classics. On April 3, The Show Must Go On will debut the direct-to-video adaptation (that takes inspiration from the West End version) of Joseph and the Amazing Technicolor Dreamcoat starring Donny Osmond, Maria Friedman, Richard Attenborough, and Joan Collins.

In honor of Good Friday on April 10, the channel will release the 2012 U.K. arena tour of Jesus Christ Superstar that stars Tim Minchin, Melanie C., and Chris Moyles.

The channel will also release behind-the-scenes clips and big performances onto the channel, which will give viewers the chance to donate to a number of theater-centric charities like Broadway Cares, Acting for Others, and the Actors Benevolent Fund.

Universal follows in the footsteps of London’s National Theatre, which announced that it would release some of its plays on YouTube for everyone to watch while we’re staying at home and social distancing. It doubles as both a way for theater fans to convene as a community online while offering access to shows that many people probably wouldn’t have been able to watch otherwise, but depending on its success, it could serve as an argument that there is an audience for something like this if given the opportunity to opt-in.