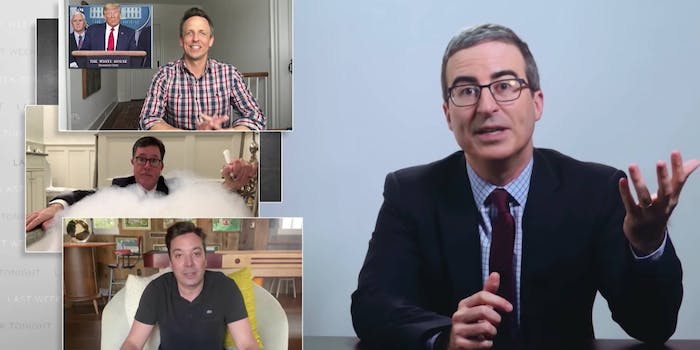 Late-night returned to TV this week. How did it go?

They're changing up their DIY approach in some ways after returning to TV.

Late-night television has gotten, to put it lightly, weird over the past few days as every show shut down their studios—and had both host and staff working from home—to prevent further spreading the coronavirus. Instead of taking an early hiatus, they continued to debut new videos online in different ways, ranging from short PSAs to full-on monologues with varying degrees of graphics from the safety of their own homes. It’s been fascinating to watch because it reveals both that you can still shake up a format that has often felt stagnant lately and how comforting their messages can sometimes come across amid a lot of uncertainty and misinformation.

This week, the hosts have largely returned to the airwaves while everyone continues to work from home. And while there’s certainly more structure involved with the actual shows, there is still plenty of room for creativity.

The biggest difference between the online-only videos that hosts like Stephen Colbert, Jimmy Fallon, Trevor Noah, and Jimmy Kimmel were making over the past few weeks and right now is the visual aesthetics. Their videos still have a ton of chaotic newbie vlogger energy, but—perhaps because the shows are being produced to air on television—there’s much more thought put into where they’re shooting new episodes.

That’s not to say that the previous locales were bad or necessarily unprofessional; far from it. Whether they’re holed up in New York apartments, bigger houses in New Jersey, out in Los Angeles, and everywhere else in-between, we’re getting snapshots into their lives and homes, often without them having to say a thing. You see it on the walls, in the furniture and decorations they chose to show, the cameo appearances from family and pets, and in the case of Fallon, the literal slide he has in his home. Some returned to wearing suits while others took a more casual approach.

There’s still a lot of that in their new makeshift studios, but now, we get a little polish mixed with the much more interesting veneer.

Before: A bathtub and outdoors

Colbert, who previously took us into his bathroom (for some reason) and to the great terrain of suburbia (a.k.a. suburbia), is now firmly situated in a room with books on one side—a lot of them, from what we can tell, being political in nature—and a giant flatscreen TV on the other. We have to knock him a bit for not incorporating his TV for more than showcasing his logo, but he makes up for it with. Like any good video call, it involves a cameo from his best-worst intern (around the 2:11 mark), who’s definitely not up for playing along on-camera like he’s supposed to. (Here’s more of Benny Colbert, if you’re so inclined.)

His first guest is fellow late-night host Oliver, who calls in with some more perspective about the unique situation they find themselves in: hosting late-night while self-isolating.

Before: A mix between a room with a pool table and a smaller, more rustic room for interviews

Now: A lemonade stand made into a late-night desk in front of a crackling fireplace

Fallon’s daughters helped transform your typical lemonade stand into something much more colorful, but it doubles as giving off corporate synergy; the top of the stand fits right in with NBC’s peacock logo. And while Fallon is reading off his monologue in front of the fire, he gives off a more homey and reassuring vibe, something that’s not been easy for him to achieve in a late-night landscape he (and so many of the other hosts) never signed up for. His check-in with Tonight Show producer and sidekick Steve Higgins also offers some levity as Higgins’ adult sons join in on the fun.

Before: A hallway and in front of his bookshelf

Now: In front of the same bookshelf, which is basically our dream Beauty and the Beast-esque library

We knew from a couple of videos posted on Late Night’s YouTube channel last week that Seth Meyers had a lot of books. Now, as he settles into a more structured routine, we catch a slightly different glimpse of Meyers’ bookshelves. He’s got a makeshift desk, coffee, and a bottle of Macallan he pours into his coffee mug—and which he takes a swig from a couple of minutes later. But the main difference between last week’s bookshelf glimpse and this week’s is the reveal that Meyers has enough books (and/or his books are high enough) to warrant the kind of ladder that moves from one end to the other.

Before: An undisclosed location reminiscent of Janet’s void from The Good Place

Now: According to Oliver, “a blank, white void full of sad facts”

Oliver’s setup hasn’t changed between his last video earlier this month (after both the studio where he films and his office building had confirmed cases of COVID-19). But apart from the background—now more of an off-white than his usual New York City backdrop—and a lack of laughter from a live audience, Last Week Tonight has more or less maintained the most normalcy out of the hosts, considering, well, you know.

Before: Locked in an office so his kids couldn’t get in, other rooms in the house

Now: A nook-type room that’s also, according to Kimmel, the only room in his house that doesn’t have Play-Doh in it

Kimmel begins his show by assuring audiences that while he has more equipment than an iPad to film his shows, he’s not endangering anyone; the camera setup that he reveals—which he jokes is like what people would use to shoot pornos—is being operated remotely. The clashes in patterns and decorations give the room a dated feel, for sure.

But when Kimmel pivots to interviews, his show feels the most like traditional late-night. Instead of a split-screen video conference call, he has a screen placed on his desk, where he’s able to interact with his guest almost as if they’re sitting on the couch next to him. And the first guest he has on his show in this manner, Tracy Morgan, doesn’t disappoint.

Before: In front of artfully (and sparsely) decorated shelves

Now: Essentially the same thing, minus a few camera angles

Noah has an advantage over his fellow hosts because Comedy Central has been broadcasting his shows from home on TV for a week now, so he’s pretty much in his element as he ties a few of the internet’s biggest stories—the coronavirus, Donald Trump’s response to it, and the Netflix docuseries Tiger King—together.