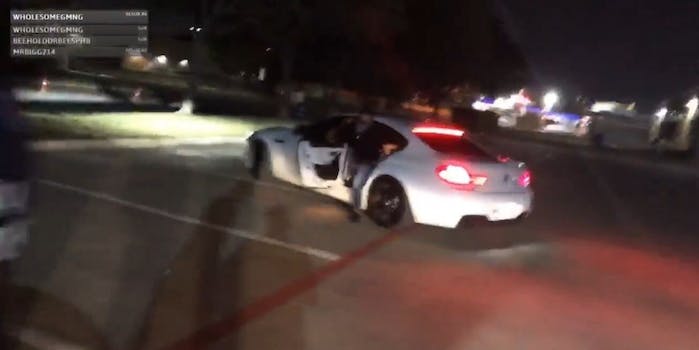 He later posted and said he was OK.

A Twitch user broadcast himself this weekend getting shot at by a seemingly random group of people, but later said on Sunday that he was uninjured in the attack.

Before his stream on Saturday, the Twitch user, who goes by the moniker Jonny Zeta and calls his channel “BeesOnMyHeadTV,” tweeted that he was set to go drag racing with some friends in a “2016 Modded GT.”

Getting ready for some drag racing with friends! We’re in a 2016 Modded GT tonight!

But his more than 1,200 followers must have been frightened or confused when Zeta got into a confrontation with a white car that night. As Zeta drove by on the street, somebody associated with that white vehicle—which was parked in the road—said, “What are you looking at, dog?”

Then, a few minutes later, it appeared the same white car drove onto the BeesOnMyHeadTV stream. As Zeta and others were pulled over in a parking lot, the white car appeared. Somebody got out of the backseat from that car, and somebody else on the stream said, “What the fuck?” That’s when apparent gunshots rang out, somebody yelled “shit,” and the camera tumbled to the pavement.

The sounds of a woman screaming could then be heard before the stream ended.

On Sunday, Zeta wrote on Twitter, “I’m OK. Everyone is OK.”

im ok. everyone is ok.

But then again, as somebody on Reddit jokingly wrote, “This sounds like what the shooter would write if he stole his phone.”

Not everybody agreed that the incident was real. As one redditor wrote, “I may be eating my words but I instantly thought it was fake when it happened. Like, you’re on video tape, commuting (sic) attempted murder and grand theft. Maybe he didn’t know he was being recorded, but life also isn’t Grand Theft Auto. People rarely just roll up shooting at everyone trying to kill them just to steal a ride.” Others argued that it appeared the shooter was randomly firing into the air or using blanks, giving more ammunition to the story that it might have been faked all along.

Either way, the BeesOnMyHeadTV Twitch channel has been suspended by Twitch.

Update 10:34am CT, Sept. 17: In a tweet posted on Monday, Zeta showed that he’s been banned indefinitely. In an email he received from Twitch, the streaming service wrote that his content had been taken down “to protect your privacy.” Twitch said it gave him a community guidelines strike, restricting his access to Twitch services.

Wrote Twitch: “Trying to get around this restriction can result in a longer suspension and may lead us to reject any suspension appeals you might submit.”