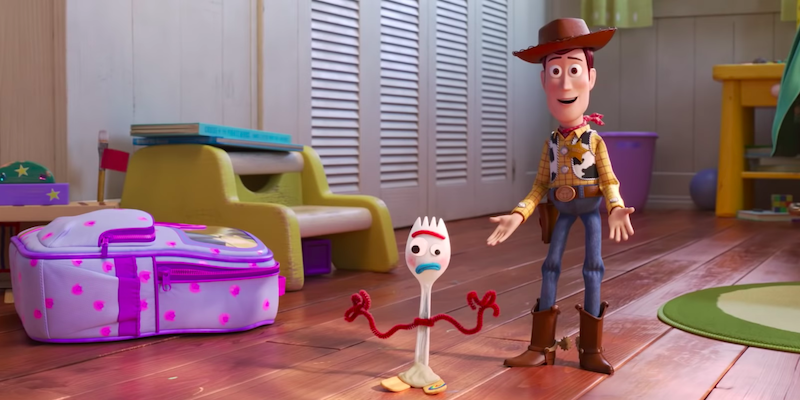 Pixar defies the odds yet again.

When you’ve slid down the side of an incinerator and stared death in the face only to come out alive, where do you have left to go? That’s the question Toy Story 4 had to answer before it earned the right to be evaluated on its own merit, nine years after Toy Story 3 seemingly brought the franchise to a perfectly cathartic end. But shame on anyone—this reviewer included—who doubted Pixar would treat its finest franchise with dignity and grace. Toy Story 4 is a gorgeous feat of storytelling and technical wizardry that not only justifies its own existence, but (hopefully) concludes a 25-year saga in a way that supplements its predecessor, rather than undermining it.

RELEASE DATE: 6/21/2019
DIRECTOR: Josh Cooley
RELEASE: Theatrical
‘Toy Story 4’ stands on the shoulders of its predecessors to deliver a wholly satisfying ending to this franchise—at least for now.

Toy Story 4 picks up after 3, by which point Andy has gone off to college and donated his toys to a youngster named Bonnie (Madeleine McGraw). The toys love their new kid as much as she loves them, but Andy’s gang has to get used to the new pecking order in town. Woody (the inimitable Tom Hanks) in particular struggles with being left in the closet during playtime, and the buildup of his first dust bunny triggers an existential crisis for the group’s elder statesman. What’s a toy to do when their first kid is all grown up, and their current kid has moved on to something shiny and new?

For Woody, the answer is diving into Bonnie’s backpack to oversee her kindergarten orientation. He arranges the materials for her to make—literally—a new friend: Forky (Tony Hale), a discarded plastic spork with googly eyes, pipe cleaners for arms, and broken popsicle stick for feet, the underside of which Bonnie adorns with her name. Bonnie loves her makeshift companion, but Forky is hellbent on flinging himself into the trash, which he calls home. (Forky constantly calling himself “Trash!” is proof enough that the writers spent adequate time on millennial Twitter in preparation for this movie.) When Forky leaps out of the RV on a family road trip, Woody follows suit, determined to clean up the mess he helped make.

Woody eventually wrangles Forky and trudges back to the campground, regaling Forky with touching stories of Andy and his introduction to Buzz Lightyear (Tim Allen). The duo makes a pitstop at Second Chance Antiques, where Woody is certain he sees his old friend and housemate Bo Peep (Annie Potts), a porcelain lamp who safeguarded Andy’s little sister, Molly, and has lived a freewheeling life as a “lost” toy for the past several years. There they meet Gabby Gabby (Christina Hendricks), a sinister antique doll with a factory-defective voice box who lusts after Woody’s perfect pipes. Gabby is every bit as evil and conniving as Stephen King’s Misery antagonist Annie Wilkes, and when she and her ventriloquist dummy henchmen take Forky hostage, it’s time for Woody, Bo, and the rest of the gang to wrench him back.

Cue Buzz, who acts as more of a bit player than co-star for the bulk of the film, and whose greatest revelation is his “inner voice” i.e. the buttons on his chest that serve as his compass. That inner voice leads him to the antique store by way of the campground’s neighboring carnival, where he recruits aging midway prizes Ducky and Bunny (a hysterical Key and Peele) for his rescue mission. Back at the store, Woody and Bo enlist Canadian stuntman Duke Caboom (Keanu Reeves, extending his winningest year in recent memory) to fly from one antique cabinet to the next. (Or is he just falling in style?) These expertly choreographed stunts are breathtaking, and the meticulously designed alleyways behind old junk drawers and underneath carnival rides become their own immersive worlds in which viewers could easily spend another hour or two.

Yet for all its white-knuckle action and uproarious humor, Toy Story 4 is a movie about purpose: How to fulfill it, and how to rediscover it when you no longer feel useful in the same way. Woody and Bo’s reunion is celebratory, but it’s also bittersweet—not because of the time they spent apart, but because it feels like a stopgap on the two different paths they’re headed down. Bo feels liberated as a lost toy, even if it’s partially a front for the heartbreak she still harbors from being given away; Woody singularly devotes himself to Bonnie, ignoring the fact that he’s clinging to a kid who’s outgrowing him.

Do these toys figure out how to fulfill their true purpose? You’ll have to see for yourself. But rest assured that in a summer of slapdash sequels and bloated, self-indulgent series finales, Toy Story 4 stands on the shoulders of its predecessors to deliver a wholly satisfying ending to this franchise—at least for now. It reverently tackles existential themes that this series has never explored before, and its emotional payoffs feel completely earned. Just like the most enduring vintage toys, it will steal the hearts of newcomers while reminding long-time fans why they fell in love in the first place.