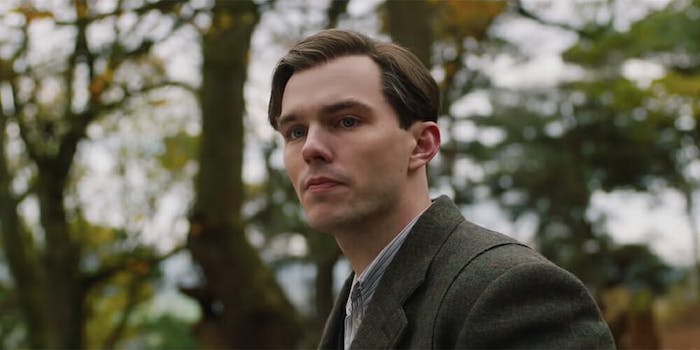 ‘Tolkien’ is an underwhelming attempt to depict an undepictable man

The biopic does its best to dramatize J.R.R. Tolkien's life. It only partially succeeds.

Director Dome Karukoski had an ambitious vision: to tell the origin story of literary god J.R.R. Tolkien. Unfortunately, few scholarly figures could hope to live up to a legend borne of such iconic creations—the tales of Middle Earth—and fed for decades by a besotted fandom. Tolkien was doomed from the start.

The biopic proves too inaccurate for true Tolkienites—and too mundane for casual fans.

Tolkien meanders through the Lord of the Rings’ author’s early life, tracing his journey from a homey cottage to an orphanage to Oxford University. It’s a journey punctuated by warzone scenes that, over the course of the film, depict a trench fever-stricken Tolkien searching desperately for his friend in a battlefield. The biopic follows Tolkien as he meets his best friends, struggles to find a career path, and falls in love. The film is slow but steady, painting the picture of an uncertain British schoolboy with as much dramatic flair as can be afforded to a 20th-century coming-of-age story.

Despite the humdrum manner in which Tolkien’s plot unfolds, its stellar cast acts beautifully. Tolkien’s band of friends, the T.C.B.S. (or “Tea Club, Barrovian Society”), are a joy to watch as they banter and bicker and critique each other’s art; actors Anthony Boyle (Geoffrey Bache Smith), Tom Glynn-Carney (Christopher Wiseman), and Patrick Gibson (Robert Gilson) exhibit equal parts gruffness, poshness, and brotherly tenderness, despite their characters never being fully developed. Derek Jacobi, who plays Professor Wright, is endearing in the role of quirky linguistics professor-turned-mentor.

The film’s most compelling scenes by far, however, are those which feature Nicholas Hoult (Tolkien) and Lily Collins (Tolkien’s love interest and future wife, Edith). Their chemistry sizzled off the screen. Collins sparkled with a mischievous air and ferocity of spirit that foiled Hoult’s solemn and cautious Tolkien. And I’m not embarrassed to admit that the way Hoult looked at her before Tolkien and Edith’s first kiss was positively butterfly-inducing.

Unfortunately, such moments are consistently undercut by a war narrative that’s as forced as it is out of place. Repeated flashbacks don’t make for the most immersive moviegoing experience, and these scenes are rendered even tackier by the director’s misguided decision to link Tolkien’s war experience with his future works. Tolkien had repeatedly condemned the projection of allegory onto his stories (and, in fact, the use of allegory in general). But Karukoski portrayed a feverish and battle-weary Tolkien hallucinating soldiers as knights on horseback, enemy weaponry as dragons, and enemy lines as shadow wraiths. This, along with the film’s distracting historical and chronological inaccuracies, was downright cringe-worthy for anyone who’s well-acquainted with Tolkien’s life.

I have a sneaking suspicion these transgressions are why the Tolkien Estate flatly disavowed the film.

Tedious narrative flaws aside, Tolkien is pleasant in an “unremarkable summer afternoon” sort of way. It successfully cultivates wistful longing and the understanding that the human imagination provides a home more real than any physical place. Middle Earth enthusiasts will also delight in the film’s few shining moments that hearken back to Tolkien’s works: The recurring theme of his love of linguistic creation; he and his friends meeting at Barrow’s tea shop, a clear influence for the Barrow-downs outside the Shire; Edith laughing and dancing in the forest as Tolkien fondly gazes on, a moment that inspired the tale of Beren and Lúthien; and, at the very end, Tolkien writing, “In a hole in the ground, there lived a…”

Ultimately, this biopic lands in an uncomfortable middling space: Too inaccurate for true Tolkienites, too mundane for casual fans. Though the real Tolkien loved the profoundly ordinary—a leather-bound book, a gnarled oak tree, the rolling hills of the English countryside—that simplicity just doesn’t make for exciting storytelling. And while I can’t imagine anyone other than superfans like myself caring about this onscreen depiction of Tolkien’s youth, I must say it’s nice to see the grandfather of modern fantasy immortalized for all the world to see.