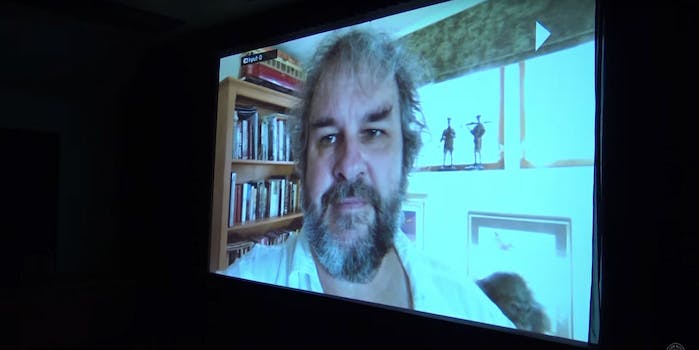 Get your Kleenex ready.

When Chris Betancourt, a 20-year-old from North Carolina, learned that he is terminally ill with cancer, he decided to draft a 127-item long “buck list” of things he wanted to do in the year he had left to live.

He and his best friend, Dillon Hill, 19, have been chronicling their adventures on YouTube since September, and one of them caught the attention of director Peter Jackson. Betancourt planned to marathon the entire Lord of The Rings trilogy in one sitting.

“I gotta say, you are doing something that I’ve never done,” Jackson told the eager fan in a pre-recorded video message during a private screening at Rooster Teeth studios in Austin, Texas. “I’ve never had the courage to watch all three Lord of The Rings movies in a single moment.”

There is a reason the goal seems like a daunting feat, even to the director: The entire trilogy is just over nine hours long, or more than 11 hours if you watch the extended editions.

Chris was able to cross off his Lord of The Rings binge-watch session with Hill, who dropped out of college to share the bucket-list experience. Hill launched a Patreon campaign designed to raise monthly funds to help turn these goals into realities, and so far it is doing pretty well—more than 243 patrons have donated to the worthy cause. Some of the goals include “Backpack through Europe,” “Help an old lady cross the street,” and “Ride a motorcycle across Alaska.”

There is also an especially crucial goal on the list.

On the website dedicated to sharing Betancourt’s story, mybestfriendlist.com, the pair announced an important aspiration that could potentially save both Betancourt’s life and so many others who are battling against cancer. To cross off Betancourt’s “break a world record” goal, on March 1 he hopes to break the record for the most bone marrow donation signups in one day.

A successful bone marrow transplant is Betancourt’s only hope for survival. To join the marrow registry that could potentially match you with people in need like Chris, click here.