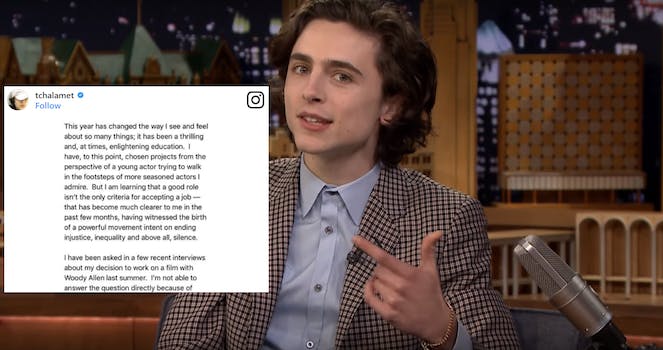 Days after Mark Wahlberg announced he’ll be donating his $1.5 million salary from re-shooting Kevin Spacey out of an upcoming movie to the Time’s Up legal defense fund (in co-star Michelle Williams’ name), younger stars seem to be taking a cue from the actor.

Timothée Chalamet, the 22-year-old breakout actor from two of the year’s most critically acclaimed movies—Call Me by Your Name and Lady Bird—announced that he will be donating his salary from an upcoming Woody Allen film to Time’s Up, the LGBT Center in New York, and RAINN. The announcement comes hot on the heels of other former Allen collaborators, including Lady Bird director Greta Gerwig, speaking publicly about their regret at working with the famous director, and their intent not to collaborate with him in the future. Allen is long-alleged to have sexually molested his daughter Dylan Farrow.

In a statement on Instagram Monday evening, Chalamet promised the as-of-now unreleased Allen project would be his last with the director.

“I have, to this point, chosen projects from the perspective of a young actor trying to walk in the footsteps of more seasoned actors I admire,” Chalamet wrote. “But I am learning that a good role isn’t the only criteria for accepting a job—that has become much clearer to me in the past few months, having witnessed the birth of a powerful movement intent on ending injustice, inequality and above all, silence.”

“I’m not able to answer [questions about my film with Allen] directly because of contractual obligations,” Chalamet said. “But what I can say is this: I don’t want to profit from my work on the film, and to that end, I am going to donate my entire salary… I want to be worthy of standing shoulder to shoulder with the brave artists who are fighting for all people to be treated with the respect and dignity they deserve.”