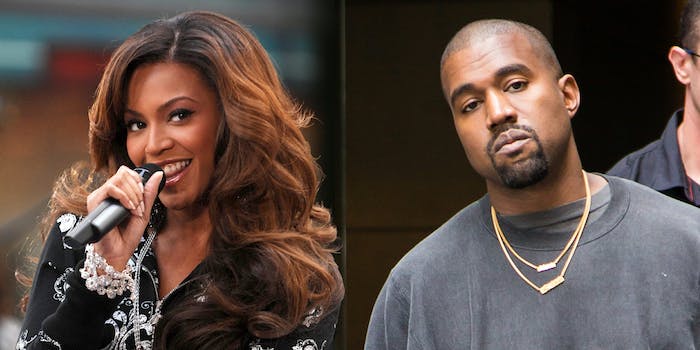 A bombshell investigation by a Norwegian newspaper claims Tidal added millions of fake plays for Beyoncé and Kanye West in an apparent attempt to inflate the impact of its streaming exclusives.

In March 2016, Tidal reported that Kanye West’s The Life of Pablo was streamed 250 million times on the platform in 10 days, “ultimately changing the way the music industry views album rollouts,” the company wrote in a press release. In May 2016, Tidal claimed Beyoncé’s groundbreaking Lemonade was listened to 306 million times in the 15 days after its April 23 release.

Those numbers were already somewhat suspicious—Tidal reported just 3 million users in January 2017, and those numbers have been repeatedly challenged—but Norway’s Dagens Næringsliv now claims a staggering number of those streams were “false plays.”

Dagens Næringsliv, which has driven the vast majority of investigations into Tidal over the last two years, based its report in part on a hard drive it received from a source that contained log files for Tidal plays that includes song titles, country codes, and user IDs. The data on the hard drive for the number of streams in February 2016, when The Life of Pablo was released, matches Tidal’s payment report to record companies the paper obtained. Both total 758,745,952 songs streamed on the service.

In analyzing the data, which shows time someone listens to a song, Dagens Næringsliv found some suspicious patterns. In one example, a user stopped the first track of Lemonade, “Pray You Catch Me,” after one minute and 14 seconds, then continued through the album, listening to “Love Drought” twice and cutting the closing track short. The exact same pattern reportedly repeats multiple times in the data—for a total of 180 Lemonade songs played in one day.

Dagens Næringsliv spoke with several of the users identified in the data, including Tiare Faatea, the law school student in the example above. Faatea said she couldn’t have possibly listened to 11 hours of Beyoncé in one day and provided photos that showed what she was doing when the data says she was using Tidal.

In other words, Dagens Næringsliv claims Tidal didn’t just misreport its streaming totals—it did so by recording additional plays on the accounts of real customers.

The findings by Dagens Næringsliv were validated by the Norwegian University of Science and Technology’s Center for Cyber and Information Security (CCIS), which analyzed an anonymized version of the log files. The CCIS found a total of more than 320 million false plays in the data, affecting more than 1.7 million users.

“Through advanced statistical analysis, we have been able to determine that data has been manipulated during certain periods,” CCIS wrote in its 74-page report. “Manipulation seems to target a very specific set of songs associated with two distinct albums.”

Tidal has denied manipulating user activity and changing royalties through its lawyers, who have also threatened Dagens Næringsliv and CCIS with lawsuits. The company also claimed that the data used for the analysis was illegally obtained and incomplete. But things certainly don’t look good for the streaming service.

Backed by Jay Z, Tidal officially debuted in March 2015 with 16 artist stakeholders that included both Beyoncé and Kanye West. The star-studded rollout promised to usher in a new era of streaming. But the company’s pitch to customers as a premium subscription service—higher payouts to artists, high-definition audio, and streaming exclusives—largely fell on deaf ears.

Plagued by mismanagement, Tidal has been all but forgotten in the streaming music wars.

According to Spotify’s recent Q1 earnings report, the company added 4 million paid subscribers in the first three months of 2018, bringing its total to 170 million users, 75 million of which are paying customers. The company has also recently overhauled its free app and partnered with Hulu to offer a bundled deal.

According to a February report in the Wall Street Journal, Apple Music is actually on track to overtake Spotify later this year. While the company boasts only 36 million global paid users, that figure is up 6 million from September, and it shows no signs of slowing.

Tidal, by contrast, hasn’t released updated subscriber models. In January 2017, the service claimed to have 3 million global subscribers, but a previous report by Dagens Næringsliv accused the company of grossly inflating those numbers.

This latest report casts further doubt on the future of the company. In December 2017, Dagens Næringsliv reported that Tidal only had enough funding to last another six months. If that holds true, Tidal may soon play its last number.