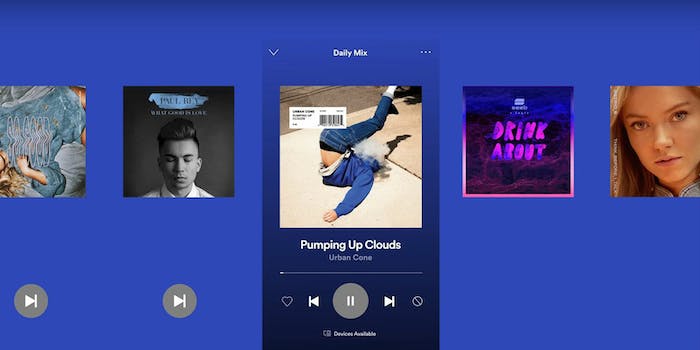 Will an improved free experience push people to pay?

The free Spotify app is getting a major overhaul with new tools previously only available to users who paid a subscription fee.

Heavy cosmetic changes are welcome improvements to how the music streaming app functions. Designed to be faster and more efficient, the app now includes a data saver mode that optimizes playback for using up to 75 percent less data when turned on. The solution is a watered down version of Spotify Premium’s solution, which allows for offline listening when songs or playlists are pre-downloaded. It’s a useful feature for those who want to save on their phone bill or live in areas with poor connectivity.

The most significant feature coming to non-paying customers is the ability to listen to certain playlists on-demand. Previously, users could only listen to playlists on shuffle mode. When the update rolls out in the coming weeks, listeners will be able to choose and skip individual songs from select playlists, much like paid users.

Spotify will make 15 of these pick-and-play playlists (750 tracks) available for users based on their music tastes. The leading music streaming service says these may include playlists ranging from RapCaviar and Viva Latino to Ultimate Indie and Alternative R&B along with personalized playlists like Discover Weekly, Release Radar, and Daily Mix.

Unfortunately, this means you won’t be able to curate your own playlists. Instead, Spotify will know what genre you listen to and play artists its algorithms think you might like. You’ll also have to go back to shuffle mode when you’re listening to a self-managed playlist, and of course, ads haven’t gone anywhere.

“This is not only about giving users a more customized free experience from the day they sign up but giving them more control over their listening experience so they can easily find and stream their favorites anytime, from anywhere,” said Babar Zafar, vice president of product development at Spotify.

The changes are being made to attract more customers. Spotify believes that by offering more free content, it will give the 90 million non-paying users a teasing taste of its paid service and convince them to start spending. Spotify says 60 percent of its Premium users started with free accounts.

“The better our free experience is, the more chances they’ll become premium users,” said Gustav Söderström, chief product officer at Spotify. “Engagement is the most important indicator of growth.”

Spotify didn’t forget to revamp its aging user interface. The design now puts more emphasis on images rather than text, so fullscreen album art will dominate the display when a song is played. The new look also takes a page from popular social media apps by using icons to make navigating easier. Four main pages define the new design: Home, Search, Your Library, and Premium. The previous Browse button was folded into search while the Radio button was removed altogether.

Spotify, which became a publicly traded company earlier this month, believes it will top more than 200 million monthly users by the end of this year.