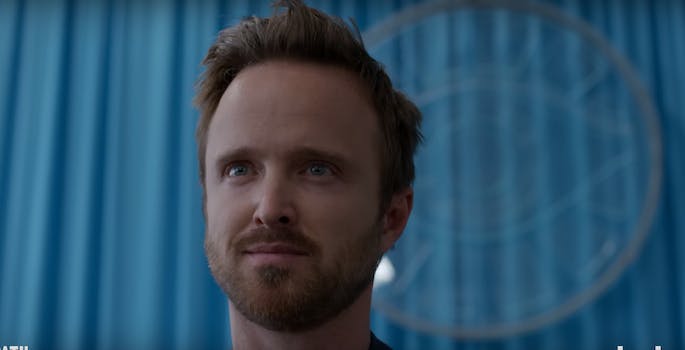 Season 3 ups the ante, and the surprises come fast and hard.

It’s one of the streaming age’s early blockbusters, from a bygone era known as “2016.” The Path, starring Breaking Bad’s Aaron Paul, appeared to have all the right ingredients to give Hulu a legitimate original calling card. It took three seasons, but the prestige drama about cult leaders and those susceptible to following them has finally delivered on the promise of the premise.

When we last left the Meyerist Movement, followers of “the Light” and climbers of “the Ladder” were being split down the middle. A power struggle between prodigal son Eddie Lane (Paul) and heir apparent Cal Roberts (Hugh Dancy) was brewing. Season 3 continues to put this power struggle at the forefront, but not without taking some unexpected turns. The opening episode features two introductory scenes, both of which aim for shock, and one, in particular, that’s so seismic it probably should’ve been been the ending to last season (which instead was anticlimactic and stilted, save for the use of Radiohead’s always magnetic “Everything in its Right Place”).

Without spoiling anything that the show’s own promotional material already hasn’t, the key shift going into this season is Eddie’s ascension to head and public face of the movement. Although he’s estranged from his wife, Sarah (Michelle Monaghan), and struggling to be a good father to his son, Hawk (Kyle Allen), he now has a larger family to look after in the cult he once tried to abandon. Paul has occasionally felt wasted in the role of Eddie, a relatable if not dynamic hero. He’s a brilliant actor, but he doesn’t get to demonstrate the same range here he did playing Jesse Pinkman. But at least Eddie is again front and center as an active protagonist.

Dancy is electric as the David Miscavige-like cult leader, Cal. Season 3 finds him fallen far from grace, living in Florida, and working as a self-help guru and wellness coach to a former NBA star. When the show asks us to believe the Meyerists would cast him aside in favor of the more palatable Eddie, it’s not hard to go along with it. Eddie is likable and charismatic, where Cal is intense and creepy. Eddie is basically the new-age, mysticism-friendly answer to Cal. But if Cal is not an easy vessel for the audience, he is undeniably a compelling character. There were moments in season 2 where it felt like Dancy could’ve easily overtaken Paul as the lead of the show and his performance remains forceful and emotionally raw—especially as we learn more about the abuse Cal suffered as a child.

Hawk remains an annoying, whiny teenager. I guess you have to cut the kid some credit, growing up in a cult and all. At least this season Hawk, and the writing surrounding his character, have matured a little bit.

Monaghan’s character has been refined too, and for the first time in the show’s history, Sarah’s crisis of faith seems genuine. As she drifts further away from the movement, closer to the outside world, she also begins to retreat into Meyerism’s early tenants. An emphasis on pain and suffering she uncovers makes for a disturbing but enthralling subplot, and Monaghan plays it with gusto.

A writing issue with all of the ensemble has been the way characters shapeshift in order to fit the story’s needs. Just look at The Path’s sophomore slump: Why did Eddie decide to become a leader at the end of last season after fighting against that calling the rest of it? Why did Sarah leave Eddie for Cal, only to return to Eddie, only to leave him when he returned to Meyerism, just like she wanted? Why does Cal keep losing his faith and then conveniently finding it again whenever the movement needs him to? Why does Hawk do anything anyone tells him after being constantly let down by every adult in his life again and again? This is a common problem in dramatic television, but a glaring one nonetheless. Season 3 corrects course for the series and offers more organic motives and actions.

Newcomers to the cast include Slumdog Millionaire’s Freida Pinto as a publicist Eddie brings in to help manage the movement’s growing profile and Homeland’s Sarita Choudhury as a mysterious outsider with her own vested interest in Meyerism. Mad Men’s Vincent Kartheiser also pops up later in the season. The best addition to the third season though is an element of the uncanny. This was present in brief glimpses of The Path’s first season before it was replaced for dull meditations on the nature of activism in the second. The thing is that a show about cults should be strange, and disconcerting, and at times supernatural.

Escaping from a cult is one thing. Even a show as goofy as Unbreakable Kimmy Schmidt did a great job exploring the levels of trauma associated with that kind of horror. But to convey the madness and fervor one has to feel to be an active participant in a cult, is another task altogether. One of the best depictions of this was the Guilty Remnant of The Leftovers. In that instance, the cult members in question had a shocking, worldwide tragedy to back-up their passion. What does the Meyerist Movement have? Season 3 suggests they have reality. In a montage during the third episode, potential converts talk about the same fears of violence and destruction that plague us all. And what do these poor souls want? “Love, community, guidance, safety, peace”—basically the things we all want. The Path’s most important revelation may be that the reasons one person joins a cult are the same reasons we all find coping mechanisms to get through the day.

I wish the show was able to draw these conclusions while also creating an atmosphere that matched the dread of its setting. Director Mike Cahill set up a distinct visual style in the pilot, filled with natural light and intimate camera work. There’s real craft here, but occasionally the style feels too Friday Night Lights when it should be more True Detective. The less realistic, more ecstatic moments are the best part of this show. Thankfully, there are a few more of those this season.

In addition to its apocalyptic premonitions, The Path also feels relevant in the parallels it creates to Scientology. Yes, the producers have tried to distance themselves from this comparison. But between severe punishments including extended isolation, therapy sessions that are later used for blackmail, the elusive founder who hid the man he truly was from his followers, and more, the influence is too much to ignore. Do improvements, timeliness, and parallels to a certain other cult-like organization merit starting The Path from the very beginning? No, you can skip ahead to season 3. The show would be more at home on a cable network like USA or TNT than trying to wedge its way into the crowded field of prestige streaming. And upping the episode order from 10 in the first season to 13 doesn’t do it any favors. Yet those who have kept on The Path are in for fun surprises and wild action.