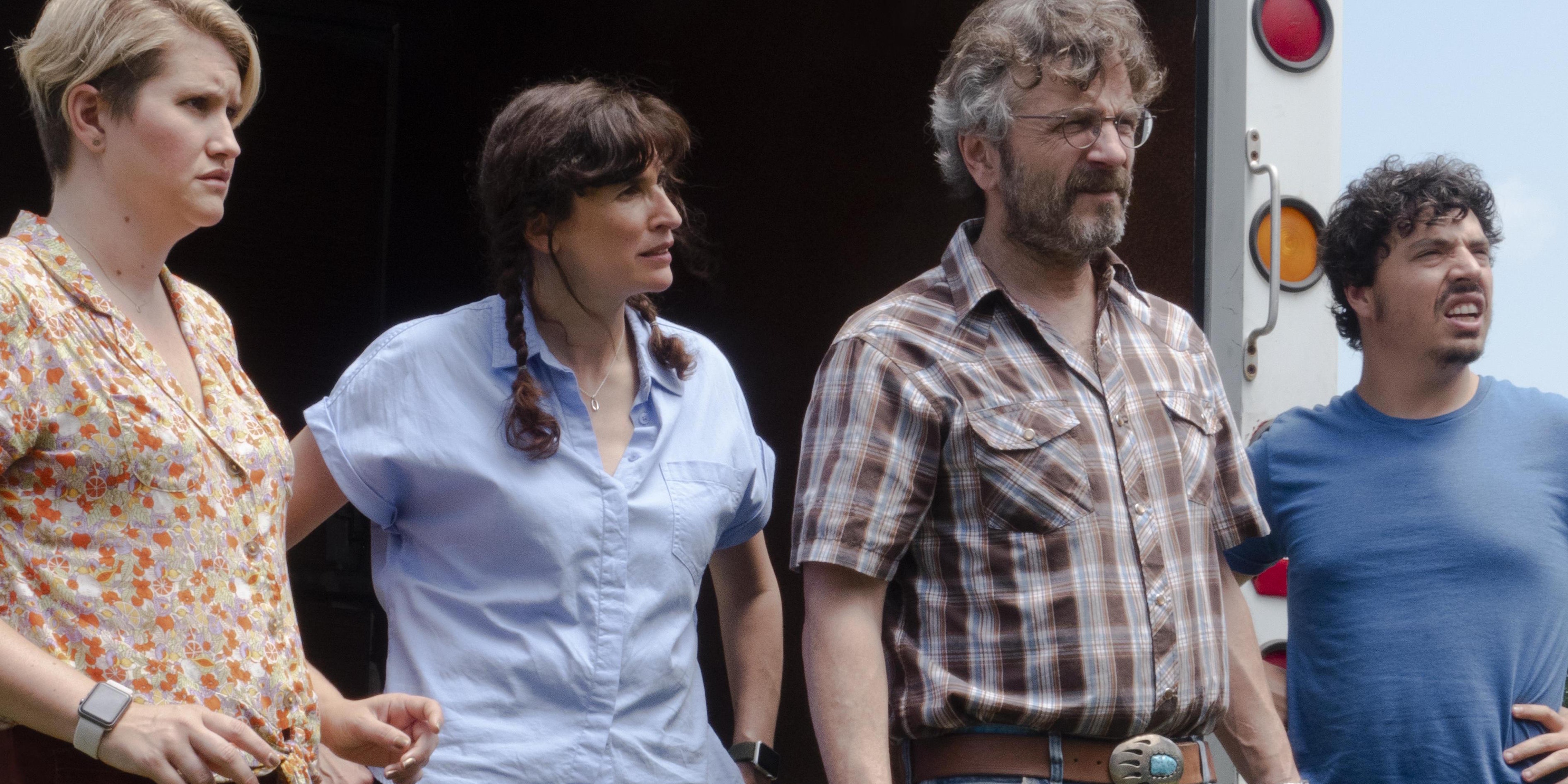 Maron and Co. take on the world of insidious alternative facts in this intimate indie comedy.

There are few things in the world as frustrating as believing with the utmost conviction that you’ve unearthed a bombshell universal truth, only for your excitement to fall on deaf ears. In Lynn Shelton’s Sword of Trust, which debuted at SXSW on Friday, four characters come face-to-face with one such insidious belief that challenges their entire worldview—but not before dragging them through the mud in an interstate screwball comedy.

Marc Maron plays Mel, the prickly owner of the Delta Pawn shop in Birmingham, Alabama. Mel and his buffoonish assistant Nathaniel (Jon Bass) eke out a humble living, cutting deals for a couple hundred bucks and often buying prized items off locals who need drinking money and selling them back with interest. But Mel finds his meandering way of life upended when Cynthia (Jillian Bell) and Mary (Michaela Watkins) march into his store with an item whose backstory is too absurd to ignore. It’s a Civil War sword that Cynthia inherited from her great-to-the-nth-power grandpappy, who claimed a Union general once forfeited the weapon to Robert E. Lee—proof that the South won the Civil War.

Mel laughs the ladies out of his store after hearing their sales pitch. But Nathaniel—whose only apparent talent is internet sleuthing—quickly learns the sword fetches a pretty penny among neo-Confederates. So Mel calls the women back, they strike a 50/50 deal, and suddenly they’re fielding an offer by a slithery man named “Hog Jaws” from a pro-Confederate truther society called the Invictusians. Hog Jaws’ boss wants to take that sword off their hands for an astronomical $40,000. The four new friends obviously accept the deal, and they hop in the back of a moving van so Hog Jaws can transport them to Tennessee to meet his boss.

You’d be forgiven for thinking Sword of Trust‘s whole plot sounds ridiculous and overstuffed by this point, but Shelton lets these wacky developments unravel at a relaxed pace, giving the film’s largely improvised dialogue time to shine. Maron gets a genuinely affecting showcase in the back of the van as he tells the story of his ex-girlfriend, Deirdre, who dragged him down into the throes of drug addiction and could never pull herself out, even after Mel got clean. Maron pauses to chew on his words before he speaks, and his co-passengers listen with rapt attention that nearly sucks the air out of the scene.

“Did you tell her?” Cynthia asks Mel.

“That you still love her,” she says, landing the film’s biggest gut punch.

Once the four get to the Invictusians’ headquarters, Sword of Trust enters more outlandish comedic territory. Mel and Mary stammer through the backstory of their coveted sword, as it becomes clear to the Invictusians’ head honcho that they don’t believe a lick of what they’re saying. Meanwhile, the otherwise dopey Nathaniel springs to life back at the van as he tries to convince Cynthia that the Earth is flat, using visual aids including a tennis ball and large salad bowl from Hobby Lobby. It’s a funny scene and an impressive act of symmetry, but it’s also a sobering reminder that even the most seemingly rational and well-intentioned people can harbor some deeply problematic beliefs, which often don’t reveal themselves until long after you’ve let them into your orbit.

As with many great indie comedies dating back to Clerks, Sword of Trust‘s strength lies in its intimate, whip-smart dialogue. Maron has enjoyed a welcome onscreen resurgence over the past few years by playing characters who are basically different versions of himself, and Mel is no exception. His coarse exterior belies an observant, well-meaning guy who disarms a couple of redneck wannabe robbers when he recognizes them as the kids who used to play in his store. The film’s score bolsters the lackadaisical pace and aesthetic, featuring lots of swampy blues guitar from Maron himself.

With Sword of Trust, Shelton has crafted an intimate dramedy of modest ambition that hints at some deep emotional truths, if not groundbreaking societal ones. That the film’s central conflict resolves with a fizzle instead of a bang matters little, because ultimately, its narrative is ancillary to its characters. Despite its topical plot, Sword of Trust makes no grand statements about our willingness to peddle “fake news” or subscribe to “alternative facts.” But it does show how rewarding it can be to step into somebody else’s world for a few hours—even if you don’t take any of it with you.