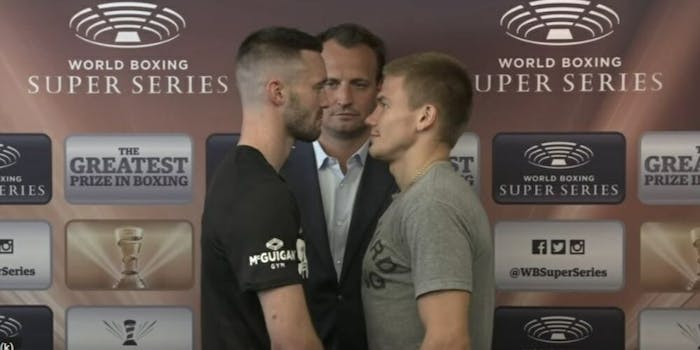 How to live stream Josh Taylor vs. Ivan Baranchyk on DAZN

This fight should be a fun one. Plus, you'll get to see powerhouse Naoya Inoue on the undercard.

Two World Boxing Super Series semifinals will take place in Scotland on Saturday, and both are competitive fights you won’t want to miss. Josh Taylor vs. Ivan Baranchyk features two undefeated 140-pound junior welterweights. While Taylor is a potential star in the making, Baranchyk is the titlist looking to take out Taylor in front of Taylor’s countrymen. Meanwhile, Nayao Inoue vs. Emmanuel Rodriguez bout features the scariest fighter at the 118-pound bantamweight division (Inoue) going against an unbeaten opponent in Rodriguez who also holds a world title.

Both matchups could be fight of the year candidates, and both winners will move on to the finals of the WBSS tournament in their respective weight classes.

Here’s everything you need to know to live stream the Taylor vs. Baranchyk and Inoue vs. Rodriguez fights on DAZN.

Like every WBSS bout this season, the only way to legally watch both bouts on Saturday is to live stream it on DAZN. Though DAZN recently got rid of its one-month free trial, it’s still one of the best values in boxing. You can watch Canelo Alvarez, Gennady Golovkin, and Anthony Joshua (three of the most popular boxers in the world) by paying $19.99 per month or $99.99 for the entire year.

DAZN has been streaming in the U.S. since last September, and it’s a been a great home for boxing and MMA fans. DAZN streams more than 100 fight cards a year, including next month’s Joshua vs. Andy Ruiz heavyweight championship fight. DAZN is doing its best to try to kill the longtime boxing PPV model.

Josh Taylor vs. Ivan Baranchyk: Why it matters

Taylor (14-0, 12 knockouts) is a potential star, and he scored the biggest win of his career last June by beating former 140-pound titlist Viktor Postol, who was once thought to be one of the best junior welterweights in the world. He followed that by stopping the then-undefeated Ryan Martin in the quarterfinals of the WBSS.

“I will win, 100%,” Baranchyk said. “Either I knock him out or I will put him down so many times that there is no doubt. Taylor has never run into a beast like me. This is going to be a new experience for him, something he’s never seen before. Let’s see how he handles it. I know how I will handle it.”

For Taylor, this is also an important step. He has the chance to take Baranchyk’s world title, and with a victory on Saturday, he’d be in line to meet Regis Prograis in the WBSS finals in what would be a fantastic 140-pound fight.

“I’m in the game to fight the best guys and prove I’m the best, and I’m fully confident I’m going to win,” Taylor told the BBC. “I’ve never felt so confident and relaxed before a fight. This is my big opportunity and I’m ready to do a job.”

Naoya Inoue vs. Emmanuel Rodriguez: Why it matters

👹 If you're not familiar with Naoya Inoue ahead of his UK debut tomorrow night, here's two minutes of him smashing opponents to bits.

😬 The actual sounds some of his punches make… pic.twitter.com/QQYQrZbOUn

While Inoue is a star in Japan, he’s only introduced himself to global audiences in his last two fights, scoring a pair of first-round knockouts versus solid fighters (and former world titlists) Jamie McDonnell and Juan Carlos Payano. He very well could dominate Rodriguez, who has never faced an elite fighter in the professional ranks.

But Inoue isn’t counting on it.

“Emmanuel Rodriguez is a wonderful boxer with excellent boxing skills, and he is my most powerful opponent in my boxing life. I recognize the pugilistic qualities of Emmanuel Rodriguez, and for that reason, I am very happy to fight with him. I have studied a lot of his boxing and now I am ready and attentive to beat him in order to verify that I am better than Emmanuel Rodriguez,” Inoue said, via Boxing Scene. “Of course I will go into fight in search of a KO without carelessness throughout the rounds. Sooner or later I will knock out Emmanuel Rodríguez. I understand that I’m favorite in odds. But I tell you that my fight with Emmanuel Rodriguez will not be easy for me.”

The winner of this semifinal match will face Nonito Donaire, a once-great fighter who’s likely in the late stages of his career, in the WBSS finals. Inoue is expected to win this fight and then probably pulverize Donaire. Rodriguez said he doesn’t care that he’s the underdog on Saturday, but Inoue said he saw something in Rodriguez earlier this week.

“When our two eyes met, it was at that precise moment in which I could sense the spiritual weakness of Emmanuel Rodriguez,” Inoue said. “He was the first to look away while I gave him an aggressive gaze.”